The phrase “too many trips to the well” became literal when it came to the franchise spun off from Hideo Nakata’s terrifying RINGU. Trendsetting ghost girl Sadako became part of the ultimately enervating onslaught of cinematic female phantoms with long dark hair, appearing in numerous RINGU sequels, a pair of 3D flicks and an underwhelming confrontation with her JU-ON counterpart (SADAKO VS. KAYAKO, reviewed here)–and those are just the Japanese features, not even counting the American RING films and other remakes/knockoffs. Even the return of Nakata to the director’s chair for 2019’s simply titled SADAKO couldn’t restore much excitement to her ongoing cinemythology.

So it was with some trepidation and eventual delight that I experienced SADAKO DX, which gives the franchise’s tropes some much-needed ribbing while introducing a few necessary upgrades to Sadako’s m.o. “What’s a VCR?” a teen girl asks her friends while learning on-line about the legend of the long-tressed specter’s cursed videocassette, an early sign that director Hisashi Kimura and scripter Yuya Takahashi will be taking the right approach to the material. (And on a personal note, I especially enjoyed seeing this series being taken in a new direction via SADAKO DX’s world premiere at the Fantasia International Film Festival, 23 years after RINGU first chilled me to the bone during Fantasia’s fourth edition.) 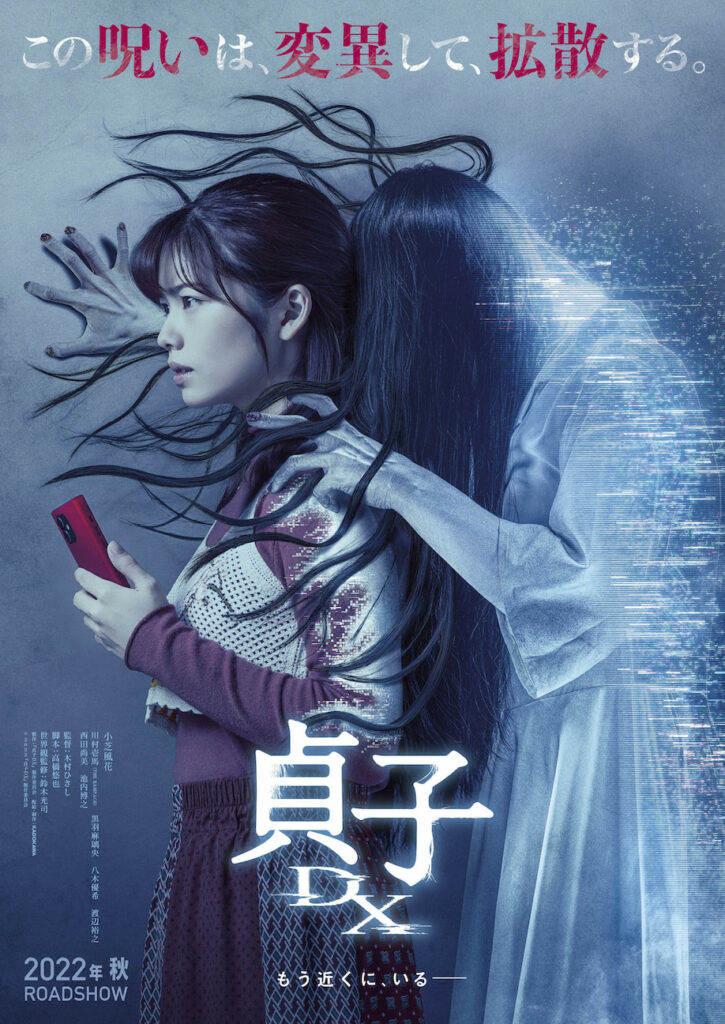 That eerie tape has been reconceived here, with different, distressing imagery and a scary little kicker at the end for those who watch it. The video and the legend surrounding it have started to become viral sensations as SADAKO DX begins, and Ayaka Ichijo (Fuka Koshiba), a grad student with a 200 IQ who has become a minor TV celebrity, is invited to take part in a televised debate about their veracity with Master Kenshin (Hiroyuki Ikeuchi), a multimedia spiritualist with a firm belief in the occult (especially because it’s good for business). He insists that curses such as Sadako’s are very real, while Ayaka, naturally, is more skeptical. Unfortunately, Ayaka’s teenage sister Futaba (Yuki Yagi) gets ahold of a copy of the tape and watches it, and even more unfortunately, the time between viewing the video and the resultant death has been shortened from seven days to 24 hours.

This condensed ticking clock is literalized by Kimura with onscreen countdowns for each cursed character, part of the playful approach that distinguishes SADAKO DX. The director and Takahashi also kid the J-horror genre’s frequent reliance on jump scares; every time such a jolt occurs here, the target character says something like, “That was surprising!” The filmmakers stop short of spoofing the genre, though; SADAKO DX is played straight, and there are a few spooky new ideas that also serve to freshen up the proceedings. This time, it’s not just Sadako who manifests as a threatening presence, and fate has many faces this time around. Once Ayaka becomes personally caught up in the curse, the movie builds a good bit of tension as she tries to put a stop to it, with the help of Oji Maeda (Kazuma Kawamura), a vlogger who posted one of Sadako’s first victims meeting her fate on-line.

The cast, also including veteran actress Naomi Nishida from THE HAPPINESS OF THE KATAKURIS and GODZILLA 2000 as Ayaka and Futuba’s mom, largely play things seriously and in earnest, though a little of Oji’s comic-relief skittishness and frequent freakouts goes a long way. Koshiba projects intelligence as the smarter-than-the-average supernatural-sequel heroine, and Ikeuchi registers strongly as a man who’s been making his living off the paranormal now being directly confronted by it. SADAKO DX is the most effective reboot this franchise has seen in a while, though one hopes the producers don’t push their luck and try to drag out this new conception into its own string of sequels. Certainly, the final scene (which got big applause from the Fantasia audience) puts a clever and appropriate capper on the entire saga.