Movie Review: “SADAKO VS. KAYAKO” has a familiar ring

It’s an interesting accident of timing that SADAKO VS. KAYAKO has made its U.S. premiere on the Shudder streaming network within a week of the much-delayed release of RINGS. Part of the challenge for both was finding a relevant way to continue a story (begun nearly 20 years ago by Hideo Nakata’s RINGU) dependent on the now-outmoded VHS format, and the two movies have a few similarities, at least in the early going.

Both films begin with the characters discovering one of those old cassette-playing relics in a second-hand store, and both feature college professors obsessed with the story of the cursed tape and the evil female spirit contained therein. (SADAKO VS. KAYAKO’s Prof. Shinichi Morishige, played by Masahiro Komoto, is even styled a bit like Johnny Galecki’s Gabriel in RINGS.) Produced by Kadokawa Pictures, the home of the RINGU and JU-ON franchises, for its 40th anniversary, SADAKO VS. KAYAKO is clearly designed to give the fans what they want, and that it does. But it doesn’t offer much that’s fresh, and the promised battle royale between ghost girls is a letdown. 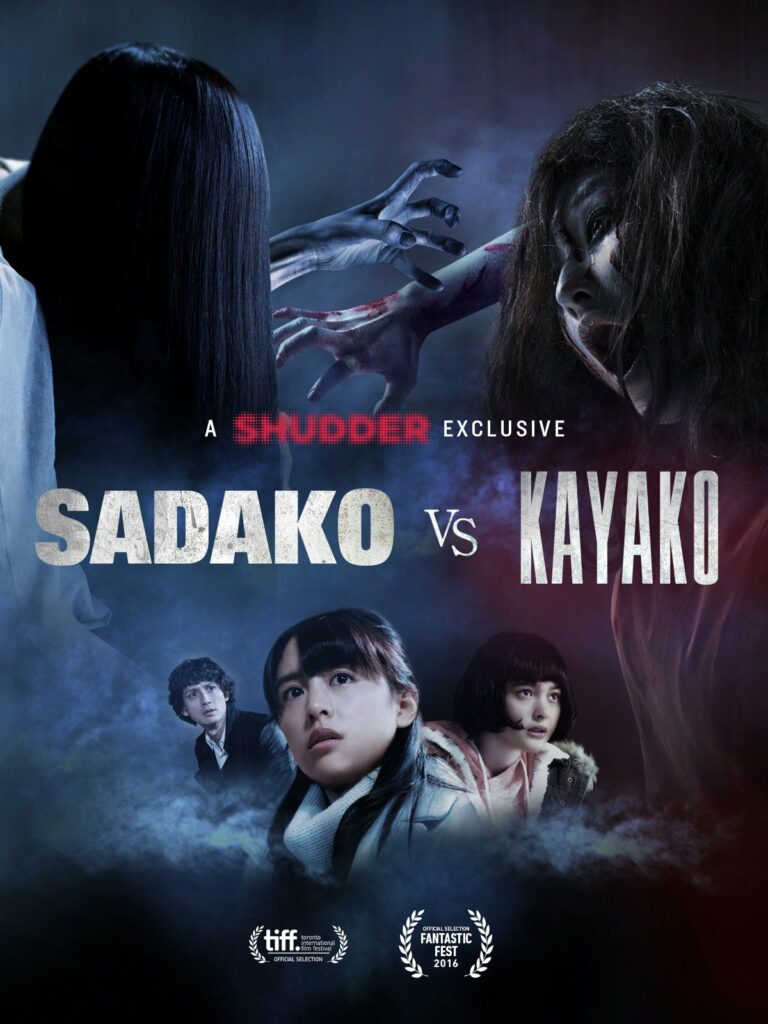 The movie has also been geared for shorter attention spans, eschewing the gradual escalation of fear that made the original movies so effective. The villainesses’ timetables have been accelerated; now, it’s only two days after you view Sadako’s video that she appears to contrive your death. That means time is of the essence when college girls Yuri (Mizuki Yamamoto) and Natsumi (Aimi Satsukawa) bring home an old VCR with the tape of doom inside it, and Natsumi winds up viewing it. (The specific staging of that first viewing is one of writer/director Koji Shiraishi’s cleverer touches.)

Fortunately, they’re in Morishige’s class, and he happens to have just given a lecture about the “Cursed Video” and other urban legends (including the Slit-Mouthed Woman, the subject of one of Shiraishi’s earlier films, a.k.a. CARVED). He attempts to help, while also becoming fascinated with seeing Sadako for himself, and neither effort comes to a good end; to make a long story short, the eventual solution is to confront Sadako (Elly Nanami) with Kayako (Rina Endo) and, as Dr. Serizawa said in the latest U.S. GODZILLA, “Let them fight.”

If you’re thinking it sounds like the JU-ON girl kinda gets short shrift in this storyline, you’re right; amongst the fans, Team Sadako will be much more satisfied than Team Kayako. The latter ghoul serves mostly as a plot device and is largely offscreen; after teenager Suzuka (Tina Tamashiro) moves with her parents into a house next door to the one where Kayako and her son Toshio (Rintaro Shibamoto) were murdered yet still linger, it’s the little boy who gets more screen time, and not even that much. Kayako finally shows up at about the 75-minute mark to make that funny noise and creepy-crawl down the stairs, and she and her kid don’t get a chance to build much creep power because instead of inexorably haunting their victims, they immediately drag unwanted visitors off to their deaths.

Shiraishi, who also helmed the traditional J-horror entries JU-REI and NOROI before moving to the explicit side of the genre with GROTESQUE, delivers the appropriate atmosphere and a few chilly moments, but even he seems aware that after nearly two decades and countless sequels and imitations, there’s not much truly scary that can be done with these characters. So he adopts a tongue-in-cheek tone while keeping a straight face, and wrings a number of knowing smiles from winks at and references to the past films. His best new invention is Keizo (Masanobu Ando of BATTLE ROYALE, NIGHTMARE DETECTIVE and many others), a hipster medium who arrives to save the day, and comes up with the idea of pitting the two ghosts against each other. His attitude, and his byplay with his tart-talking little blind, red-clad sidekick Tamao (Maiko Kikuchi), gives the film’s second half a much-needed jolt of energy.

It’s a shame, then, that the conflict the whole story has been building to doesn’t amount to more. The movie is almost over by the time Sadako and Kayako have at it, and while it’s a kick to see these two icons go hand-to-hand (or hair-to-mouth), Shiraishi doesn’t do enough with the possibilities. Beyond homaging the two particular film series he’s combining, he should have harked back to another Japanese favorite, KING KONG VS. GODZILLA, which had its stars grappling by the halfway point and delivered a more memorable royal rumble.