At the very beginning of this summer’s Fantasia International Film Festival, the two showings of SPEAK NO EVIL toward the end of the fest were already sold out. Clearly the movie’s reputation preceded it, based on its attention-grabbing Midnight screening at Sundance earlier this year, and it turned out to warrant the enthusiasm. Not since George Sluizer’s original THE VANISHING has a movie built so gradually yet inexorably from placid beginnings to a conclusion of sheer, merciless horror.

THE VANISHING was Dutch and SPEAK NO EVIL (which opens in New York and LA theaters September 9 before streaming exclusively on Shudder beginning the 15th and hitting more big screens the 16th) is Danish, and coincidentally, those are the nationalities of the two families SPEAK focuses on–with an exacting, uncompromising gaze. Danes Bjørn (Morten Burian) and Louise (Sidsel Siem Koch) and their young daughter Agnes (Liva Forsberg) are on a group holiday in Tuscany when they make the acquaintance of Dutch Patrick (Fedja van Huêt) and Karin (Karina Smulders) and their little son Abel (Marius Damslev), and the two families become fast friends. Some time later, Bjørn and Louise receive an invitation from the other couple to visit them at their home. Patrick and Karin’s place is an eight-hour drive and a ferry ride away, but really, they were so nice and are being so gracious in reaching out this way–how can Bjørn and Louise say no? 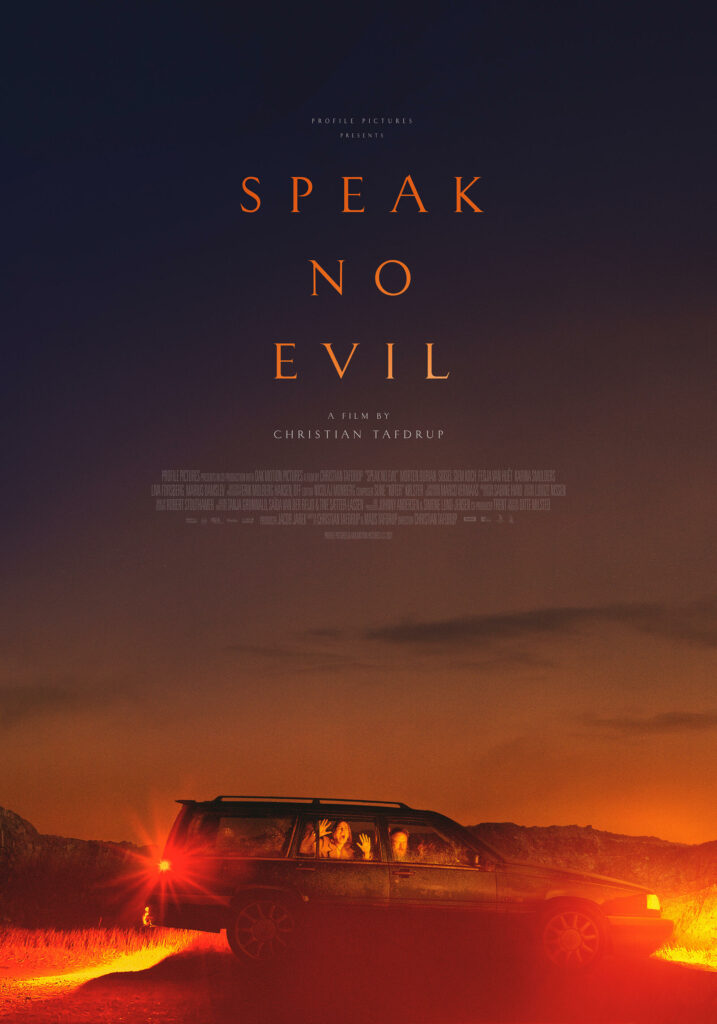 That’s the question at the center of SPEAK NO EVIL’s approach to dread-building, which is predicated not on its protagonists’ inability to recognize danger signs, but on their reluctance to respond to them properly in the name of good manners. Just based on the genre of film we’re watching, we know that Bjørn, Louise and Agnes’ trip can’t end well, and director Christian Tafdrup, who scripted with his brother Mads, both teases and stokes our suspicions by playing snatches of Sune “Køter” Kolster’s threatening score over attractive, tranquil scenes from early on in the film. He also swiftly establishes the contrast between the two couples, particularly the men; Bjørn, who seems a tad repressed and accepting of his humdrum life, Louise and Agnes live in a monolithic apartment building, while the more uninhibited Patrick dwells with Karin and Abel in a rustic old house in the woods.

At first, the visit seems like a happy one, with just a couple of small awkwardnesses that could be chalked up to Patrick and Karin not being used to having guests. Then, gradually, the microaggression grows into something more pronounced, as Patrick uses the bathroom while Louise is taking a shower there, and drives a little too fast and plays the music a little too loud on the way home from a restaurant outing. Bjørn seems willing to overlook these occurrences in the name of keeping the peace, and even seems to be responding to Patrick’s attempts to guide him into embracing his inner alpha male. Louise, however, is having none of it, and insists they need to depart early. But that will prove a lot easier said than done…

The director and his excellent cast play the increasingly tense interactions between the couples as scenes from a domestic drama, not a horror film, expertly toying with our expectations of both what Patrick and Karin are up to and how their guests will respond to it. SPEAK NO EVIL is one of those movies that really sucks you into wondering how you would respond in a similar situation, watching with increasing unease as circumstances build to what could be a breaking point, or some sort of terribly awful payoff. At the same time, where so many horror films and psychological thrillers have had characters fail to get out when the getting’s good out of simple foolishness, the Tafdrups have here created a jet-black comedy of manners in which middle-class codes of behavior have the potential to become its protagonists’ downfall.

Many have compared SPEAK NO EVIL to another European screws-tightener, Michael Haneke’s FUNNY GAMES, and while the Tafdrups’ film is just as excruciating and domestically contained, the villainy in GAMES is more blatant. The potential for terrible acts in SPEAK NO EVIL lurks under the surface for a good deal of the running time–and in the hesitation to acknowledge and respond to the subtle danger signs.