Fantasia ’22 review: “RESURRECTION” goes into the psychochiller Hall of fame

Even as she has kept her filmography consistently varied, Rebecca Hall has become one of horror’s most valuable players. She first impressed as a skeptic investigating alleged ghost sightings in 2011’s underrated THE AWAKENING, served as the moral compass in Joel Edgerton’s THE GIFT and gave one of last year’s best performances in or out of the genre in THE NIGHT HOUSE. As strong as those roles were, none of them asked Hall to plumb the psychological depths she explores in RESURRECTION, and she plunges wholeheartedly into what is arguably the most galvanizing and fascinating screen role of 2022.

RESURRECTION (which played this week at Montreal’s Fantasia International Film Festival, opens today in select theaters, comes to VOD August 5 and streams exclusively on Shudder in November) begins with Hall’s Margaret advising intern Gwyn (Angela Wong Carbone) on how to deal with an emotionally abusive relationship. Margaret herself would seem to be at no risk for such a dilemma; with a top job at a pharmaceutical corporation, she seems to have everything in her life under control, including her overprotective but genuinely loving single-mom relationship with her teenage daughter Abbie (Grace Kaufman) and even an unapologetic affair with a married co-worker. Then one day, she goes to lecture, spots a particular man sitting in the audience, and freaks out. 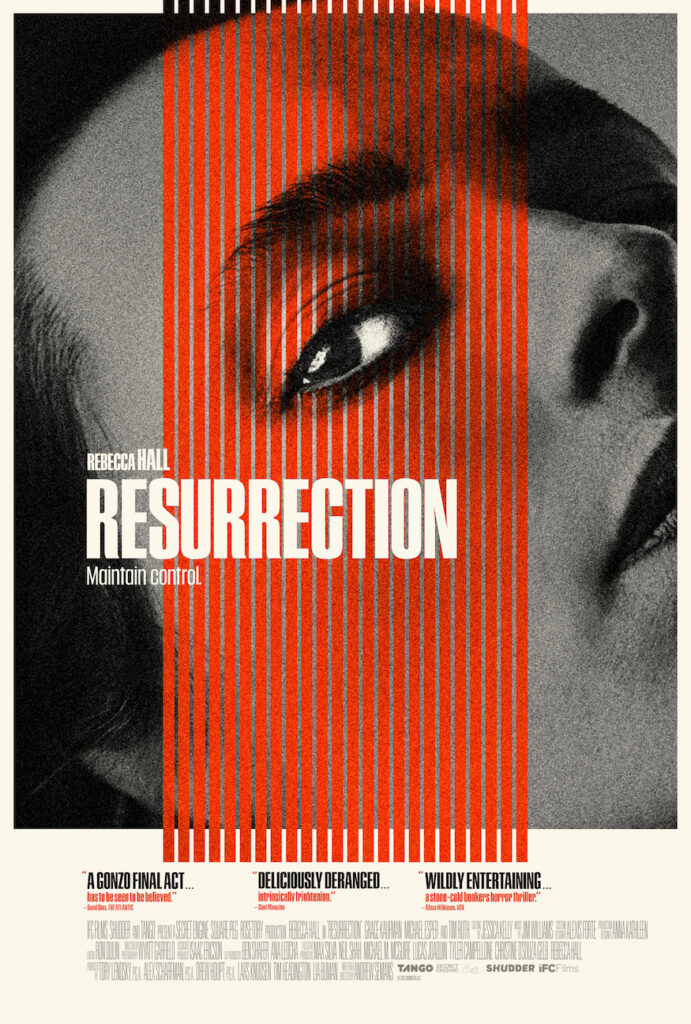 Why does David (Tim Roth), who doesn’t do anything to confront or threaten Margaret, seem to suddenly and decisively shatter her sense of security? That’s part of the mystery of the first half of RESURRECTION, in which writer/director Andrew Semans drops suggestive moments of dialogue and behavior while keeping the specifics of their backstory vague. Clearly he’s one twisted individual, but aside from leaving an unsettling totem in one of Abbie’s belongings, he doesn’t do anything overtly menacing. He just shows up at places he knows Margaret will be, and the fact that he knows his very presence is enough to severely rattle her makes it clear he has left an unhealed scar on her psyche. Semans and his two leads create a shuddery scenario that’s sort of a reverse stalking, in which Margaret finds herself compelled to seek David out, yet is unable to take action against him.

Instead, David uses these encounters as further opportunities to reel her in, and Roth plays him as a passive-aggressive devil who knows that manipulation is a far more effective scheme than intimidation. And Margaret–who, if you had asked her about this situation beforehand, would have insisted she’d react with far more strength than she does–finds herself trapped anew in a cycle of emotional exploitation she thought she’d left far behind. Eventually, we do learn about their shared history–through an absolutely riveting monologue, delivered by Hall in an unbroken take lasting more than seven minutes, in which Margaret explains it all to Gwyn, pointedly reversing their roles from that early scene.

Yet awareness that she’s regressing back into old patterns isn’t the same thing as dealing with it, and RESURRECTION builds excruciating suspense as we wonder just how far David will be able to…not push her, but draw her back under his spell. The extreme nature of his control over her and what it leads her to do might have played as implausible in other hands, but Hall’s wrenching performance gives us all the necessary insight into how and why Margaret falls under David’s sway and stays there, even as it causes a potentially permanent rift between her and Abbie, to whom she’s terrified of explaining the sudden changes in the way she’s acting.

Something eventually has to give, and a SPOILER ALERT should be given before even hinting at where the movie goes in its final act. After the first 80 minutes or so of finely calibrated tightening of the psychological screws, Semans takes things to a new, graphically visceral level that genuinely horrifies while remaining of a piece with the themes he’s been exploring throughout the film. A particular recurring element of David’s stratagem becomes literalized in a shockingly gruesome manner, and it all leads to a closing scene that can be read a couple of different ways. The paying off of RESURRECTION’s preceding grisliness in such an ambiguous manner might frustrate certain viewers, but it crucially stays true to the themes and approach of the movie overall, and adds one more layer of potential discussion to what will likely be one of the year’s most talked-about thrillers.