The game of Bodies Bodies Bodies, in the movie of the same title, gives the participants a chance to play out a multiple murder scenario–one of the group, their identity unknown to the others, is the “killer”–without anyone actually getting hurt. There’s a similar vicarious thrill in watching BODIES BODIES BODIES, which allows you to witness a series of horrible deaths with a great amount of glee, without feeling bad about it. That’s a delicate balancing act to pull off, one that many movies have attempted and failed at, but director Halina Reijn and scripter Sarah DeLappe, working from a story by Kristen Roupenian, pull it off splendidly.

BODIES BODIES BODIES, a closing-night attraction at the Fantasia International Film Festival that opens in select theaters tomorrow and goes wide August 12, is one of several recent horror films to incorporate the toxicity of the social-media age, and arguably the best. The basics are those of fright fare from time immemorial: a group of people stranded in a big, remote house, being picked off one by one, with no way to call for help. Only for this group, the lack of cell service doesn’t seem as dismaying as the absence of Internet access; their lives are lived on-line, at a distance, which is one reason they seem incapable of banding together for the common good in person when their lives are imperiled. 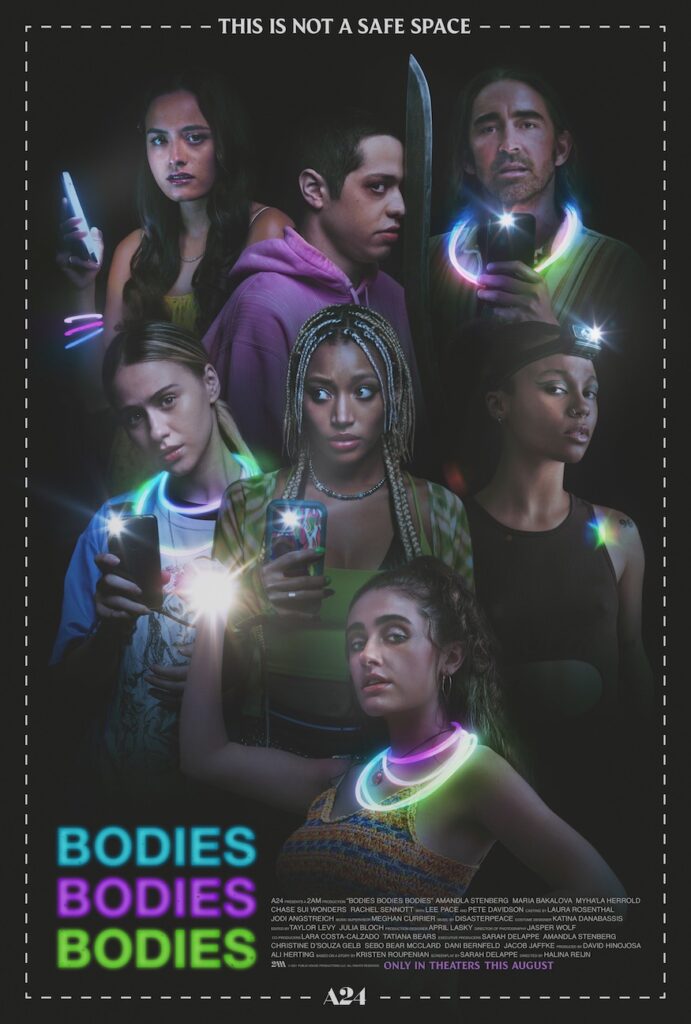 We arrive at the gorgeous mansion in the middle of nowhere along with Sophie (Amandla Stenberg), who has brought along her new girlfriend Bee (Maria Bakalova, from BORAT SUBSEQUENT MOVIEFILM…) to introduce her to the rest of her pals. The place belongs to the father of the debauched David (Pete Davidson), though there are no true adults at this gathering save Greg (Lee Pace), the 40something boyfriend of Alice (Rachel Sennett). The gang is rounded out by David’s actress girlfriend Emma (Chase Sui Wonders) and Sophie’s ex, Jordan (Myha’la Herrold), and they’ve all gathered for a “hurricane party” during which they’ll ride out an impending storm and indulge in sex, drugs and rock ’n’ roll, not necessarily in that order.

The real turbulence, of course, is fated to take place inside the mansion’s walls. It’s not long before everyone is taking kidding-but-maybe-not-really verbal potshots at each other, and what seem like well-meaning comments can have ulterior motives. (Jordan tells Bee re: Sophie, “Be careful,” and it’s said less out of concern for Bee than in the interest of sabotaging Sophie’s new relationship.) When part of that game involves each of the group slapping another, the physical violence is just an extension of the emotional hostility coming to a boil.

Watching a bunch of 20something vipers sniping and worse at each other could (and has, in many another film) become a turnoff, but DeLappe’s sharp script brims with delicious dialogue and quickly establishes distinctive personas for everyone, and Reijn orchestrates it all with a fast pace, maintaining a taut balance of uneasy tension and vicious humor. With cinematographer Jasper Wolf, she emphasizes close-ups that keep us involved in the emotional mayhem, and the ensemble enthusiastically play off each other like people who have known each other all their lives–long enough to know secrets and weaknesses that get unpacked as the night wears on and the situation becomes deadly. Crucially, there’s a sympathetic center in Bee, played by Bakalova as someone who almost seems like a different species than the mean girls surrounding her.

And this is indeed a girls’ show; it’s not giving anything away to say that the male characters are either suspects or dead before long, as the film begins racking up a bodies count. The tall, strapping Greg would at first seem the obvious culprit–particularly as he’s demonstrated his ability to open a champagne bottle with a Gurkha sword–but the filmmakers and cast effectively play out a wicked whodunit in which it’s entirely plausible that any one of this pack could be the killer. Even Bee, by far the most outwardly innocent of them, takes actions that draw suspicion her way. Of course, it would help if the ladies could just put aside their differences in the name of survival, but it’s the satirical point of BODIES BODIES BODIES that animosity is too entrenched in who they are to be easily let go, even under the worst circumstances.