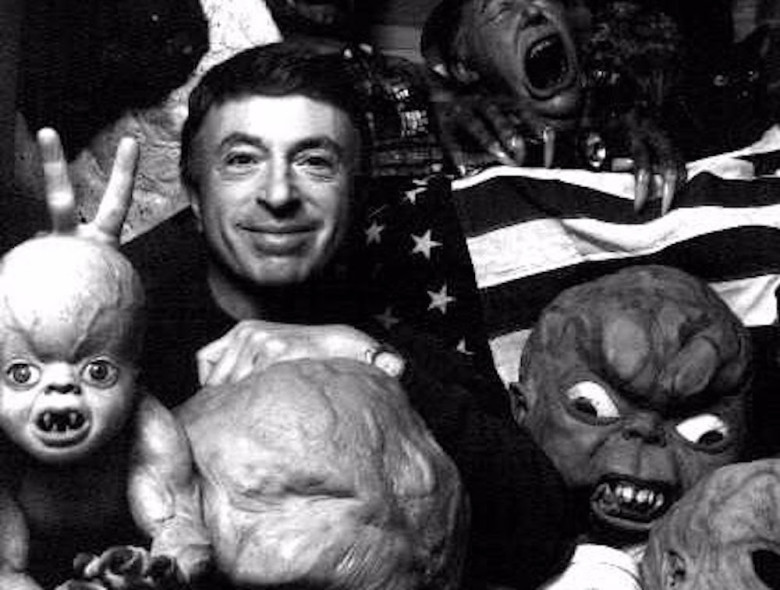 The career of Larry Cohen, one of genre cinema’s most consistent yet idiosyncratic talents, is being celebrated this week at Montreal’s Fantasia International Film Festival. Last night saw the world premiere of KING COHEN, Steve Mitchell’s documentary on the maverick writer/director/producer’s life and career, and beginning tonight and over the next two nights, 35mm prints of Cohen’s Q, IT’S ALIVE and GOD TOLD ME TO will be shown at the Cinémathèque Québécoise (the first with Cohen and star Michael Moriarty on hand for a Q&A moderated by Rue Morgue’s Michael Gingold).
Cohen, who talked of his guerrilla style of filmmaking here, began his career in television, writing episodes of THE FUGITIVE and others and creating shows such as BRANDED and THE INVADERS—Western and sci-fi, respectively, showcasing a knack for cross-genre creation that would soon serve him well. 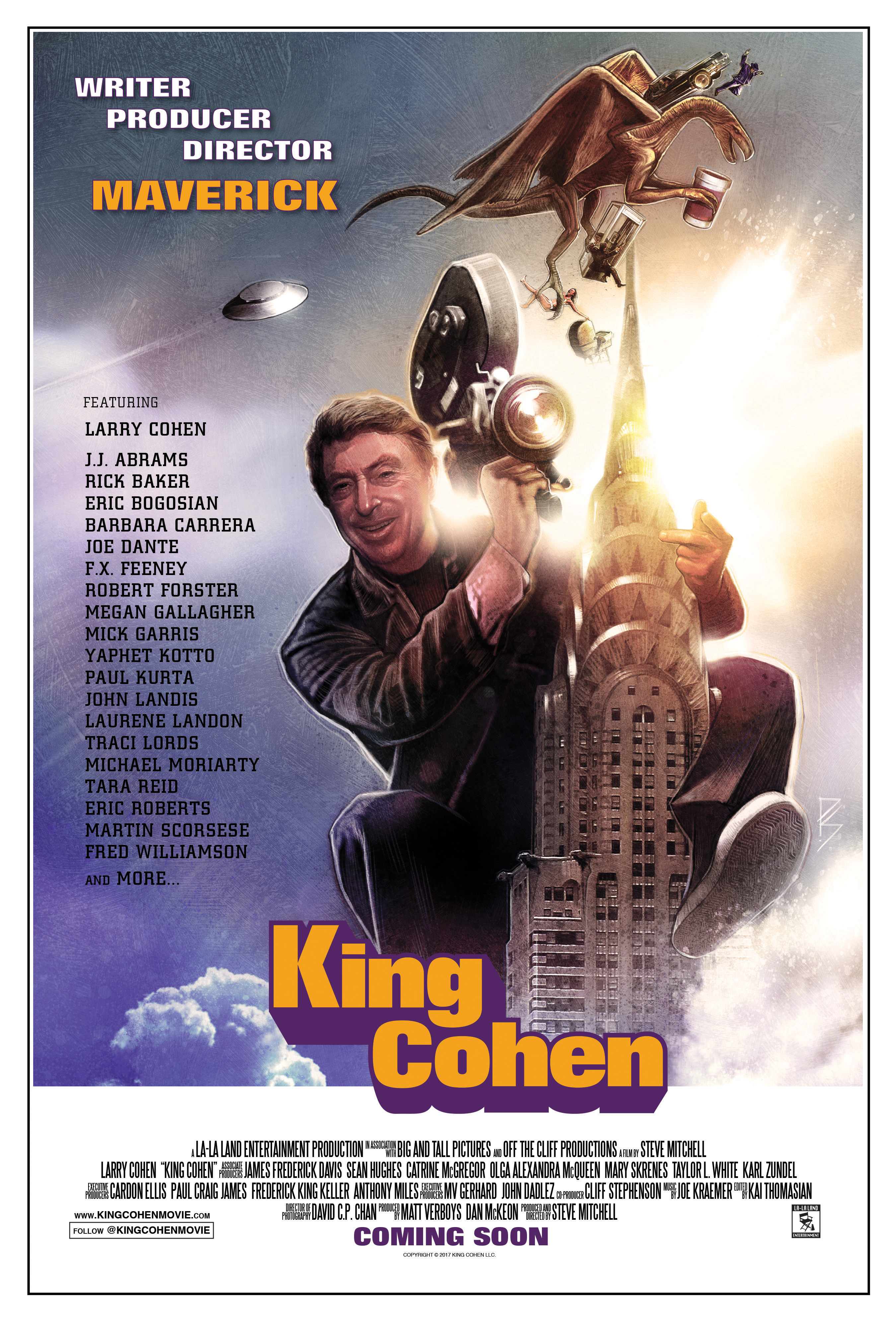 “As time went on, I sold film screenplays to other people—who usually ruined them,” Cohen recalls. “I was so sick of writing good scripts and then having lousy movies made out of it. Finally, my wife said to me, ‘You’ve got to just make your own movies, because you’re going to be unhappy for the rest of your life.’ Indeed, I probably would have made a nice living if I had just kept selling scripts, but at the end of the road, I would have had nothing to show for it.”
So, anticipating disappointment, Cohen decided to make his own movie. The result—1972’s BONE—was hardly an anodyne plea for mainstream acceptance. “What can you say about a comedy about a black rapist who invades a Beverly Hills house and ends up falling in love with the housewife?” Cohen says. “It’s quite a picture, quite a picture. I’m very proud of it. It could be released today and it would still probably be ahead of its time. Very fascinating subject: the essence of racism and why people behave the way they do—the tragedy of it all. And yet it’s a comedy.”
After the release of BONE, Samuel Z. Arkoff, the head of American International Pictures, called Cohen up about a gig making blaxploitation fare, saying—prepare to cringe—”Boy, you really know how to direct those black actors.” “I said, ‘There was only one black actor in my picture, Yaphet Kotto—and you just direct them like anybody else.” Undeterred, Arkoff asked what Cohen had cooking. As it happened, Cohen had written a script for Sammy Davis Jr., but never got paid because Davis was then in hot water with the IRS.
“So I went down and got this script, BLACK CAESAR, out of the trunk of my car,” Cohen says. “Next thing you know, we were shooting the picture. It was just thanks to Sammy Davis Jr. and the IRS.”
BLACK CAESAR became a hit, providing Cohen the juice over the next few years to get extremely idiosyncratic and subversive flicks like IT’S ALIVE (1974) and GOD TOLD ME TO (1976) produced. Despite his long run of dark thrillers and monster flicks—not to mention a 2006 MASTERS OF HORROR episode, “Pick Me Up”—Cohen is not all that keen on being described as a genre filmmaker.
“I didn’t really do too many pictures that I consider to be horror movies,” he says. “My films were not ultraviolent, and it seems that what the audience wants in horror movies in recent years is real violence, gore, driving spikes into someone’s eyes, people chopping arms off. I mean, God bless ’em, that’s a kind of entertainment if that’s what you like. I’m more into intricate ideas and characterizations, though.
“Most of the monster movies I grew up with, the leading characters were such cardboard figures,” he continues. “There were scientists and then there’d be some beautiful girl with big boobs, and she’d be a nuclear physicist. Then here comes the giant spider or whatever. I’d say, ‘Oh God, this is so boring. The people are so dull.’ I thought, ‘If I make one of those kind of movies with a big monster, I’m going to have to have very interesting characters—like the one Michael Moriarty plays in Q. Characters that become more interesting than the monster. That’s usually the case in all my movies—real characters with depth, and the dialogue is quality dialogue. It’s not just being thrown out there to set up the next big splash of blood on the wall or decapitation or whatever they do. That’s not my kind of picture.”
Of course, Cohen’s kind of picture is instantly recognizable as his own—the director, however he may choose to label his oeuvre, possesses a singular vision. When asked whether the ever-growing appreciation for his seminal and enduring work has begun to pay dividends as the children of the ’80s assume positions of power in the industry, Cohen straight-up says, “No.”
No?
“No, no, no, no,” he says. “How about that? People do say nice things about the pictures. The work has its fans. But that doesn’t seem to influence anyone too much on what they’re going to finance. And it has absolutely no effect on what I do. I make low-budget movies, and everybody’s aspiration is to make high-budget movies.
So why does Cohen believe that’s the default aspiration of even the kind of people who love his work? “There are a number of reasons,” he replies. “One, it’s easier to steal. If you have a large budget, it’s much easier to pad. You get all kinds of little perks like traveling and hotels. A lot of these movies spend more money on hotels than I spend on the whole movie. They’re not interested in making low-budget pictures. They’re not interested in advertising and promoting low-budget pictures. They want a STAR WARS picture, an INDIANA JONES remake, where they can make a picture for $250 million and spend another $200 million advertising it. That’s their agenda, not making a low-budget Larry Cohen movie. The only guy who wants to make low-budget Larry Cohen movies, I think, is Larry Cohen.”