Exclusive Interview: Mia Goth and Brittany Snow get into the skin of “X”

Debuting on VOD today (services include Apple TV, Prime Video, Google Play, YouTube, VUDU and more; go here https://tickets.xthemovie.com/watch-at-home/ for more info), X also stars Jenna Ortega, Martin Henderson, Scott Mescudi, Owen Campbell and…Mia Goth, who donned extensive prosthetics to additionally play the elderly Pearl. She and her husband Howard (Stephen Ure) own the property the porn crew have rented, and don’t respond well when they find out what the visitors are up to; she’s also the subject of West’s X prequel PEARL, which A24 will release later this year. For now, X (reviewed here) marks a gruesomely triumphant return by West (who talks about the movie here) to big-screen terror, and a fine showcase for Goth and Snow, playing adult-entertainment performers with more sympathy and agency than one usually finds.

MIA GOTH: That was one of the things that was really enticing about this entire project. Ti’s done a ton of horror movies, but he hadn’t really been involved in a feature for a while, because he didn’t want to do the same thing again. So he liked the idea of taking a slasher movie and elevating it, in terms of the craft and production, and that was very exciting. 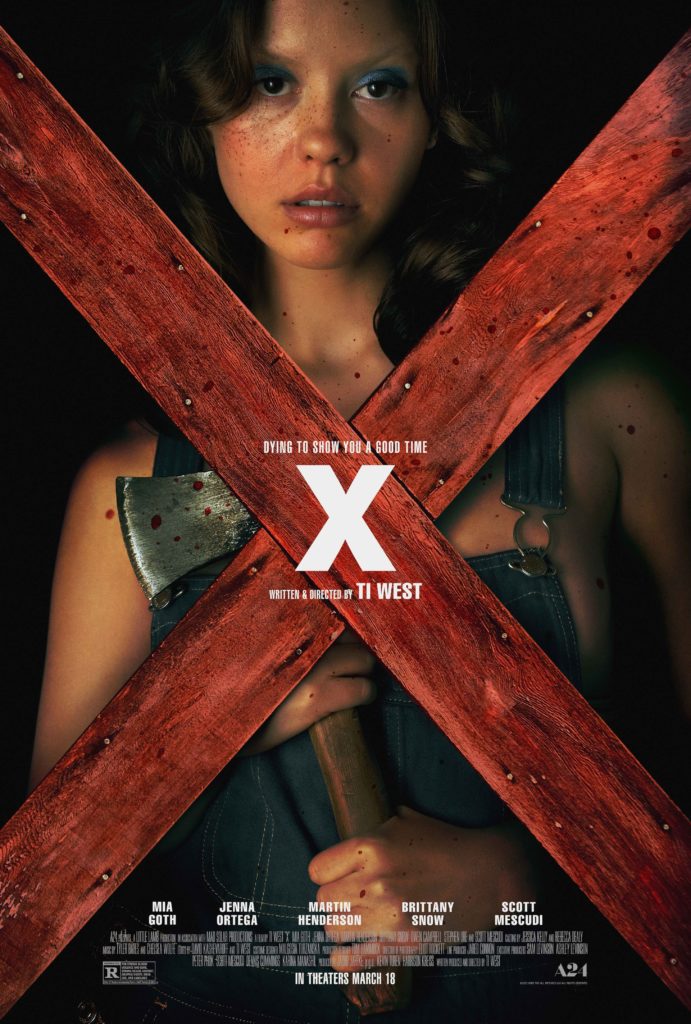 Could you each talk about getting into the headspace of your character?

SNOW: For me, Bobby-Lynne was someone who, even when reading the script initially and talking to Ti, I had a lot of respect for, and that was imperative to playing her. There was a way of playing her where, as an actor, you’d look down on this girl who was doing these things and had no awareness of what she was doing, but actually I believe she’s the complete opposite of that. She’s very in control and has a lot of agency regarding her body and her choices, so I went into the film aiming to play her like she’s one step ahead of what everyone is thinking. I watched a lot of Dolly Parton, her movies and interviews and such, to be inspired by how smart she was, and still is.

GOTH: We were very lucky in that we had a lot of prep time for X, so I was working on Maxine, and on Pearl, for three months before we ever flew out to New Zealand [where X was filmed]. That was a real gift; usually, you don’t get so long. In those three months, I met with a choreographer and explored Pearl’s physicality, and that helped me start to understand her a little more. And because in certain ways, Maxine and Pearl are kind of the same woman, everything that I was able to understand about Pearl informed Maxine, and vice versa.

When it came to playing Pearl, did it help that you had been in SUSPIRIA, in which Tilda Swinton played a similar dual role?

GOTH: [Laughs] Yeah! Tilda is an incredible actress, and she executed that so beautifully, and that definitely did cross my mind. And I thought, “If I could do a fraction of what Tilda did in SUSPIRIA, I think I’ll be OK.”

How was it being under all that makeup, and creating the character of Pearl through the prosthetics?

GOTH: Hard work! It was a good 10 hours in the makeup chair, and then I’d go and do a 12-hour day on set, and the makeup artist, Sarah Rubano, who was incredible, would constantly be touching me up and making sure my contacts were all right and all those sorts of things. But ultimately, I realized that I just needed to harness that energy and everything that was happening, and however tired I might have felt on set, it actually all informed Pearl, and helped with the heaviness of her, and how someone might feel when they’re in their 80s. It was difficult, but the hard work actually helped the performance.

Brittany, how was it acting opposite someone playing two very different roles, switching back and forth between them?

SNOW: It was just astounding to watch Mia go back and forth, because when she was Pearl, I could not see Mia in her. I had to really look closely into her eyes to find her, and I think that’s the mark of a great actress. But it was also quite scary, because I knew she was in there somewhere [laughs]. Mia has an incredible ability to transform herself and her physicality, and go into another space. Part of me, Brittany, wanted to be like, “Hey girl, what’s up?”, like, “How’s your day?” and then I had to shut down and be like, I can’t do that, because I’m talking to an old lady.

Are either of you fans of ’70s horror, and if so, did you especially enjoy revisiting that era through this movie?

GOTH: Ti made me a fan of ’70s horror movies! He gave me a bunch of them to watch, like THE TEXAS CHAINSAW MASSACRE and HALLOWEEN and all those sorts of films. I’d heard of them, but I hadn’t had a chance to watch them, and so it was cool to watch them alongside Ti, with him telling me what to look out for. It was a way to embrace these films as much as possible.

SNOW: I’m not super-familiar with all of them, but movies like CARRIE and ERASERHEAD and TEXAS CHAINSAW MASSACRE, those I had seen as a kid and respected, and there’s such an interesting quality to ’70s horror films in terms of how they’re shot. It was such an fascinating time for films in general, and some of my favorite movies are from that time, so I was excited to be a part of something in that genre, set in that era.