After assembling a strong feature filmography with the likes of THE HOUSE OF THE DEVIL, THE INNKEEPERS and THE SACRAMENT, director Ti West turned to television in the late 2010s, helming episodes of SCREAM: THE TV SERIES, THE EXORCIST and THEM, among others. Now he’s back on big screens in a big way as the writer and director of the full-tilt shocker X, which he discusses with RUE MORGUE below.

Released by A24 and set in 1979, X follows a group of amateur adult filmmakers to a remote farm in Texas, where they plan to keep their salacious activities a secret from their elderly hosts. Unfortunately, the old couple have secrets of their own, and the flesh fantasia becomes a bloodbath (see our review here). Starring Mia Goth, Brittany Snow, Jenna Ortega, Martin Henderson, Scott Mescudi and Owen Campbell, X is a grisly, sexy salute to a pair of genres that flourished back in the 1970s…

For me, making X was about trying to create a truly craft-focused film. I have a great reverence for cinema, and I wanted to invite people in to what it’s like making a movie, and hopefully give them some appreciation of that, as well as what I was doing in the horror movie I was making. But to your point, horror movies and porn movies were films that were made outside of the system, that didn’t have to go through the Hollywood machine, yet found a commercial value. In the mid- to late ’70s in particular, when home video was really starting to take off, there was an opportunity for people to make movies without experience, and without access to all the things that Hollywood previously had. Having come up from very low-budget, independent horror movies, it’s not that different from people outside the system making adult movies. They were both looked at as these kinds of subversive, lowbrow entertainment that could find their own value, so I felt like it made sense to put the two together. 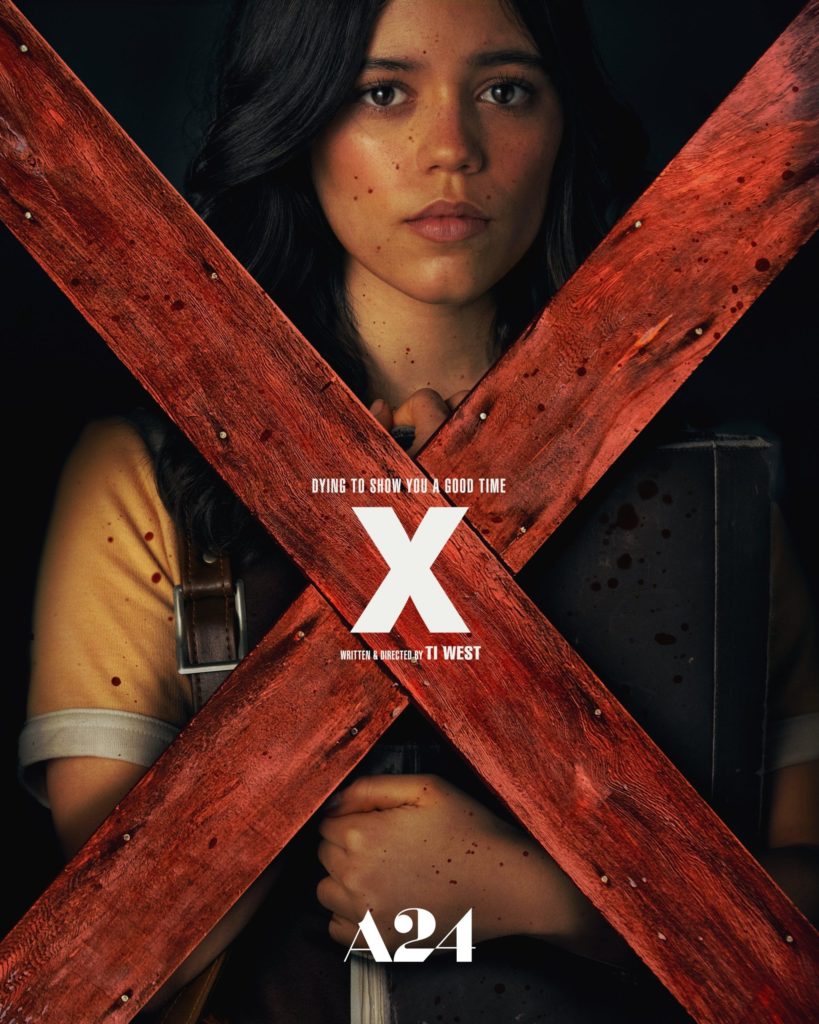 How did this become your first feature after a while spent doing TV work?

I had done 17 episodes of television in about five years, and I was really enjoying myself and felt very sharp. I had this idea kicking around, and a couple of years ago I thought if there was ever a time to do it, it would be now. And then of course, the global pandemic hit, which made it very complicated, but I just felt like, as I was saying before, I have a real reverence for cinema, and we’re bombarded with content now but we’re not necessarily thinking about what goes into the craft as much anymore. I wanted to make a project that was a love letter to movies, in a way, and would highlight all the crafts, from prosthetics and practical makeup effects to acting and the possibility of doing more than one thing as an actor, to an interesting score, to a period setting and all that. I wanted to throw myself into something that really felt cinema-driven.

Obviously, TEXAS CHAINSAW MASSACRE is a reference point for X, and your DP Eliot Rockett actually worked with Tobe Hooper on CROCODILE, so did he bring anything from that experience to this one?

No; they did a lot of that movie on the water, although we did spend a bit of time in the lake. To me, THE TEXAS CHAINSAW MASSACRE is at the top of the great slasher movies of all time, and X obviously takes place in Texas and they’re in a van and whatever, but I thought it was interesting to [subvert that]. Your expectations of the movie, because of TEXAS CHAINSAW, may be one thing, and then what I deliver is something else. In general, hopefully, my movies subvert expectations, and I think X is one where if you’re a cinephile or a horror fan, you might think you know what you’re getting, and then you actually get something else.

What led you to shoot in New Zealand, and how did you find the right locations to double Texas down there?

Mostly COVID-19. We were going to push the movie back a year, to wait for the next summer, because it was 2020 when this happened. A24 didn’t want to wait a year, so we looked at the other hemisphere, because it would be summer down there and Weta was down there. I didn’t think we would find a place; mostly, New Zealand does not look anything like Texas, but there’s one little area that did, and we found some farmland and we found a house that was pretty damn close, and then the rest we built. We were able to go there because they had isolated themselves and kept COVID out. When we shot this movie, you had to quarantine to get in the country, but once you did that, there was no COVID, so it was safe for everyone to make the movie, because this is not a particularly social-distanced film! It felt important to me that everyone be able to make the movie in the old, normal way of doing it, and New Zealand was the place to do that.

Did any of the cast have any reservations about performing the sexual material, or did they all just go for it?

I’m sure some people did, but my first question to everyone I met was, “Why the hell do you want to be in this movie?” because I really wanted to hear their reasons. I believe in a lot of cases, people had an idea in their heads of what the movie was, but that wasn’t what it actually was. I think people had a more nihilistic idea of what it could be, and what they were worried it would be. And in talking to everyone, when I would find out their reasons for wanting to be in the movie and then tell them what it actually was, everyone was very enthusiastic. It’s certainly a hard-R movie, but when you say it’s about people making porn and then getting murdered, it’s far tamer than it could be. But in today’s day and age, when slasher movies and horror movies in general have gotten a bit soft, I think this one delivers for the horror fans who want to see something they can tell their friends about, like, “You’ve gotta see it, it’s crazy!”

X does get extremely gory at times; did you have to trim anything down for the R rating?

No, actually, and I didn’t know what I was going to do [if it didn’t get an R]. I’ve always had pretty good luck with the MPAA, because my movies are not that nihilistic, which I think helps. There’s a little bit of fun and spiritedness to X; I don’t know if that was part of their thinking or not, but I hope so. But no, I didn’t have a Plan B, so we just went for it. We got a long list of the reasons it’s rated R, but it’s still rated R.

Speaking as you were before of doing more than one thing as an actor, what was the inspiration behind Mia Goth taking on the dual role of Maxine and Pearl?

Well, I thought that in many ways, they’re two different characters in the movie, but the same person. So my hope was always for them to be played by the same actor. I didn’t know if we were going to find that person, and that’s a credit to Mia, who I believed in from the very jump of meeting her, that she could do it. It really highlights the craft of acting, and how amazing that can be. There’s a duality to those characters that’s thematically interesting within the movie, or maybe existentially to everyone, and then it’s a real display of how great Weta Workshop and Sarah Rubano, our makeup artist, did. For a lot of people, there’s that moment where they realize it, and maybe it’s during the movie, or maybe it’s during the credits, or maybe it’s when a friend tells them that afterwards, and they have this really fun reaction of, like, “Whoa!” You don’t get that often with movies, and if I was just an audience member, I would appreciate that.