It’s a natural marriage, given that grassroots fright films and skin flicks were the two most popular types of below-the-radar filmmaking in the ’70s. And of course, THE TEXAS CHAINSAW MASSACRE, the granddaddy of this particular strain of scare cinema, was originally distributed by Bryanston Pictures, whose first big hit was DEEP THROAT. Tobe Hooper’s landmark is an obvious key reference point here, but West isn’t simply appropriating the basics of its mood and plot in X. He and cinematographer Eliot Rockett (who once collaborated with Hooper on CROCODILE) create a world that recalls CHAINSAW while striking out into their own perverse and frightening territory. 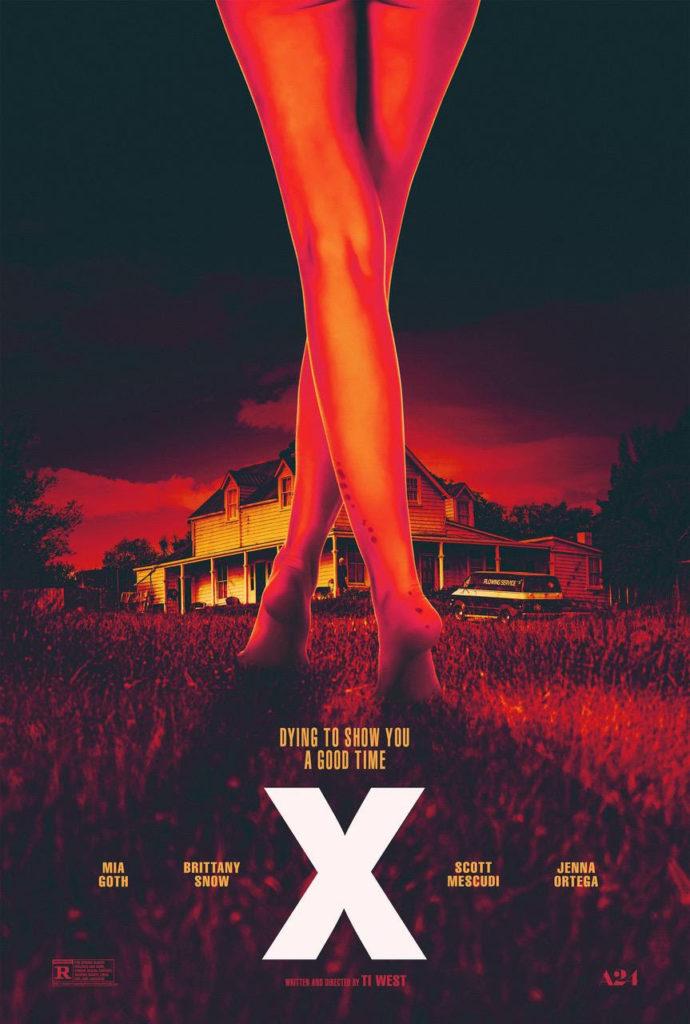 Sex has been a frequent, often exploited ingredient in horror ever since the ’70s, but X is that uncommon fear film that’s about sexuality, and not just the carnality going on in front of the camera wielded by its small troupe of amateur pornsters. The year is 1979, not long before video will forever change the way adult movies will be produced and consumed (and the dawn of the post-HALLOWEEN slasher boom), and middle-aged wannabe producer Wayne (Martin Henderson) has rented some isolated Texas farm property as the site of his magnum opus, which has the couldn’t-be-more-generic-porn title THE FARMER’S DAUGHTER. His writer/director is the younger aspiring filmmaker RJ (SUPER DARK TIMES’ Owen Campbell), who believes he can elevate his script’s collection of “My car broke down…” plotting and crude double entendres into Art, and the stars are Bayou Burlesque dancers Maxine (SUSPIRIA’s Mia Goth), for whom Wayne has left his wife, and Bobby-Lynne (Brittany Snow), and Bobby-Lynne’s boyfriend Jackson (Scott Mescudi, a.k.a. Kid Cudi). Along for the ride, and to hold the boom mic, is RJ’s girlfriend Lorraine (Jenna Ortega, seen this year in SCREAM and STUDIO 666).

From the outset, X teases fright fans’ familiarity with genre conventions by setting up two potential final girls. The shy, sweet, innocent, out-of-her-element Lorraine would seem to be the obvious candidate, but our protagonist is clearly Maxine, vividly portrayed by Goth as a young woman anxious to break out of her dead-end life by any means necessary. Both she and Bobby-Lynne are way more than the sum of their body parts; they’re unapologetic and open about the ways they choose to use their bodies, and X has a sex-positive attitude that sets it apart from many of its decades-old inspirations. The relationship between Lorraine and RJ, as the former becomes increasingly intrigued by what her boyfriend is capturing on film, also results in some pointed observations about the way women’s sexuality is viewed.

Meanwhile, the group are trying to keep their activities secret from their elderly hosts who own the property. They mostly deal with Howard (Stephen Ure), who advises them not to do anything that might disturb his initially unseen wife Pearl. We suspect, of course, that she might already be disturbed, and again, West here plays a game of expectation: Will the villain prove to be Howard, or Pearl, or both? The answer involves a greater depth of characterization for the villain/s than one might expect, and despite the pastor ranting against sin on the couple’s TV, the eventual murders aren’t simply puritanical payback against the libidinous youths. There’s more to the motivation, and it leads to some memorably discomfiting scenes, including one that inverts the genre standard of a hot and horny couple getting it on while a fiend or monster lurks under their bed.

While incorporating touches of cheeky and sneaky humor (the gang’s van has “Plowing Service” emblazoned on the side, and The Yankee Pedlar from West’s THE INNKEEPERS gets a shout-out), West builds a sense of grotty mood into X that really creeps under your skin. Right from the start, we know that no good can come from this situation, and the writer/director surehandedly cranks up the suspense before paying it off in genuinely shivery and gruesomely bloody ways. There are a number of small homages too, from a swimming-hole scene introducing an element that recalls Hooper’s EATEN ALIVE to West borrowing Blue Öyster Cult’s “Don’t Fear the Reaper” from the HALLOWEEN soundtrack (the period song choices are otherwise less familiar, and very well-used). These are just grace notes, however, in a bigger picture that salutes its classic forebears while finding its own original, dark and terrifying roads to travel.