Longtime genre actress Dee Wallace is having an especially busy year on the horror scene, with one fright flick debuting today and an eagerly awaited one out in September. She gave RUE MORGUE some words on those and a few other upcoming projects.

First up is DOLLS, now on VOD and DVD from Uncork’d Entertainment. Directed by feature first-timer Cuyle Carvin, it reunites Wallace with the writing/producing team behind last year’s OUIJA HOUSE and stars Tom Downey and Trinity Simpson as a father and his teenaged daughter who move into his deceased mother Edna’s house. They discover a trio of odd-looking dolls in the attic, which turn out to have an evil purpose; Wallace plays Margaret, a neighbor and former associate of Edna who knows the dolls’ secrets. Rob Zombie’s 3 FROM HELL, just announced as a Fathom presentation in September, casts Wallace as…well, best to let her tell it. The actress has a lot to celebrate this season beyond her film vehicles (which also include this summer’s CRITTERS ATTACK!); her daughter Gabrielle Stone’s first novel, EAT, PRAY, #FML, just debuted (it’s available at Amazon.com and other outlets) to reader raves.

How did you first hook up with the DOLLS/OUIJA HOUSE team?

That was because the cinematographer [Ben Demaree] had done a short film I appeared in that I just loved called CHARLIE’S GIFT. I play an 80-year-old woman in it, and it’s a beautiful piece. So he mentioned my name for OUIJA HOUSE, and they called me. We had a very nice experience, and it was lovely working with them again. I liked the DOLLS script; it was very well-written, so I said, “Yeah, I’ll come in.” They work fast, yet the quality of their stuff is really good. And I love playing character roles; I’m the leading lady in a lot of things I do, but I really enjoy character parts, and Margaret is one of those weird, flighty older women who you might think is bonkers, but you find out she’s not [laughs]. 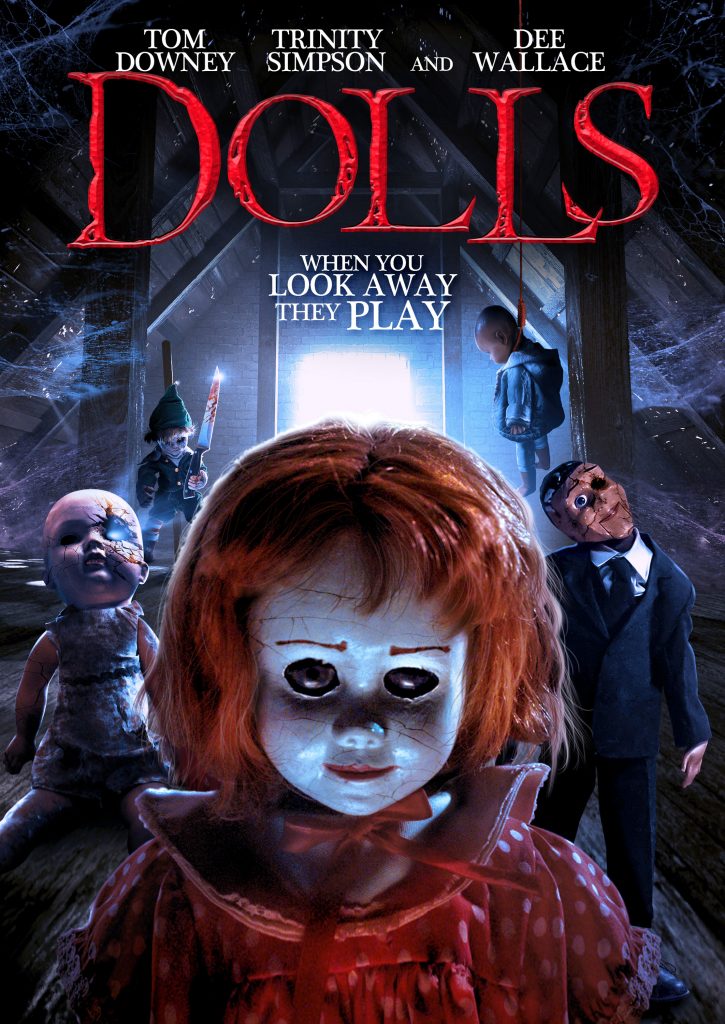 How did Cuyle Carvin do as a first-time director?

Very well; he was interesting and fun. He trusted his actors to come in and try whatever we wanted to try, which I love. I believe all good directors do that; the insecure ones try to pin you down to what can be a limited vision. The beauty of film work is when everybody comes in and collaborates, so I really enjoyed working with him. I had a lot of freedom; he took care of the technical stuff and how it was shot and blocked, and allowed me to create Margaret. Tom Downey and Trinity Simpson were beautiful to work with, and we just went in, rehearsed it once and shot it. That can be gratifying if you have actors who know what they’re doing, because you don’t over-rehearse, you don’t overthink things; you’re in the moment with each other. It was an effortless shoot all the way around, and they all should be, right? No matter how much money there is. You get a lot more out of your actors that way.

You have one scene with the dolls, but did you get to see them in action on the set?

I didn’t see the dolls until right before that scene, so no. But I saw renderings, and I knew how they were going to be used in the film. I knew they weren’t going to move a lot, and the filmmakers weren’t going to CGI them to make them come alive, and I think there’s an art in that. We get way too much into the technical stuff these days, because it’s better when you use your imagination. I mean, that’s why you don’t see the shark for the first half of JAWS, because your imagination builds it up better than anything they could actually show. Have you ever seen DON’T LOOK NOW? Oh my God, I love that film, and nothing really scary happens till the end, and it’s one of the most frightening films I’ve ever seen.

Do you find dolls scary in any way yourself, or have you ever had a fear of them?

I have not. I was never into dolls when I was a little girl, though. I was more afraid of the thing in the closet—the closet was my nemesis when I was little. In my room, I had this big walk-in closet that went back really far, and I just knew there was something in the back of it. My poor dad, probably three times a week, would take me in, and we’d walk all the way back into the closet: “See, honey, there’s nothing here.” And as soon as I got back in bed, there was something there [laughs]! It’s great when you can capture that kind of thing, which I think they do really well in DOLLS—that creation our own minds make, that doesn’t necessarily have to be there.

What can you tell us about your part in 3 FROM HELL?

I can tell you, look really closely; you won’t even know it’s me. I walked by Sid Haig and Bill Moseley the first time we were on set together and said, “Hey, guys,” and they looked at me and went, “My God, it’s Dee!” Sid said, “Oh my God, I never would have known that was you!” I play a character I’ve never played before, not particularly a nice one, and I have a lot of great scenes with Sheri Moon Zombie. We had a good time together. I love Sheri—what a beautiful lady she is. 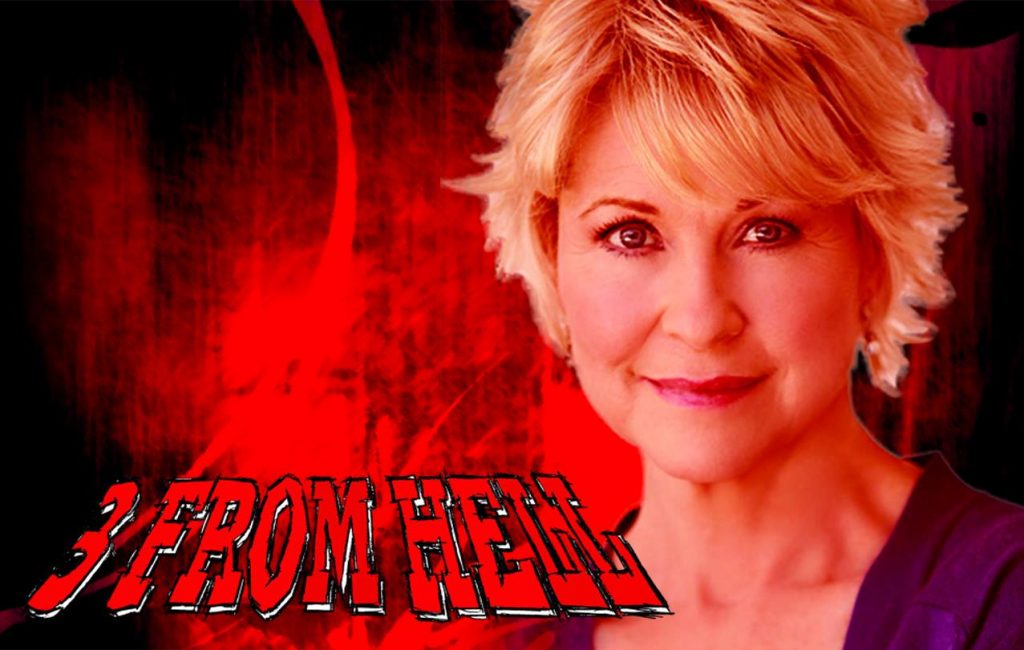 Is it more fun playing a villain?

I don’t know if it’s more fun, but it is a lot of fun. I had a great time killing everybody in THE FRIGHTENERS. What I like is a part that gives you a huge emotional arc, and a lot of the time those roles do. In THE FRIGHTENERS, I start out as this simpy little victim and end up a ball-busting murderer, and there’s all kinds of emotional stuff in between. Those are the parts that rock my boat, so 3 FROM HELL was so much fun for me. And you know Rob—he comes in and goes, “OK, this is what we need to do, and let’s see what you’ve got, Dee!” It’s totally collaborative, and you just throw out everything, and then he hones it in. I love working with directors like that, because you get everybody’s best stuff.

You’ve done several films with Zombie now; how did this experience compare to the previous ones?

Well, when we did LORDS OF SALEM, we were working with two or three cameras on sticks [tripods], and I was mostly with two English actresses [Judy Geeson and Patricia Quinn] who did not like to improv. And the first thing I did with Rob was HALLOWEEN, where all we did was improv and it was handheld. 3 FROM HELL was a nice combination of all that, and everybody was improv-ing and coming up with ideas.

I imagine you must have hung out with Haig and Moseley quite a bit on the convention scene, so was it fun to act with them as their iconic characters?

Oh, absolutely, and I love both of them. And that’s so true; they are iconic characters in this. I thought, “If I’m going to walk into this film, I’d better be willing to be pretty frickin’ out there.” I couldn’t let that little girl from Kansas be too afraid to go at it, because this woman, she’s waaaaay out there! When Rob called me about it and I read it, I said, “Just give me a day. I want to make sure I can fully commit to this.” Well, it took me about an hour, and once she got into me, it was like, “Oh my God, I have to do this character now!” It’s classic Rob Zombie, and everybody’s going to really get off on this ride. It’s the antithesis of the part in DOLLS, OK? It’s all the way at the other end of the spectrum.

When I talked to Bill Moseley about the movie, he said it was full of “gratuitous violence.” Is this the next step beyond for Zombie?

Well, honey, that’s classic Rob Zombie! I think everything Rob does is a further extension and exploration of his creative ability. He is one of the most complete creative people I’ve ever known, and such a nice guy. That’s why all these iconic actors, whenever he calls, we go, “Yup. I’ll be there.” 3 FROM HELL goes back to his earlier work, but in a more evolved way. So if you’re a Rob Zombie fan, you ain’t going to be disappointed by this film!

Loving, communicative, calm. Sheri brings him his protein shake and his vitamins every morning. They’re just so beautifully sweet together [laughs], which I know goes against his whole persona, but that’s really who he is. He’s just a caring, creative, wacky, loving guy.

You also worked with David DeCoteau recently on a couple of his WRONG made-for-cable thrillers, THE WRONG MOMMY and THE WRONG TEACHER.

I love Dave. We’ve been together since SKELETONS [1997]. That was a great shoot, with huge actors [Ron Silver, Christopher Plummer, James Coburn] I respected. It absolutely should’ve gone to the big screen; they just needed more money for the special effects stuff. It was unfortunate, because those actors gave such great performances. Working with Dave, again, is effortless, but you better frickin’ know what you’re doing, because you come in, you do one rehearsal, and that’s it, you’re shooting! So if you’re an actor who needs to putz around, and you think you’re going to learn your lines while rehearsing 12 times and so on, you’re not a good match for Dave, because he works clean, he works fast and they always look great.

You’re also in an upcoming film called AWAKE THE DAWN; what’s that one all about?

It’s quite an intense combination of sci-fi and horror, and a very interesting script. We just finished it, and I don’t believe they’ve even shopped it yet. It’s about a scientific experiment gone wrong involving this guy who’s trying to connect with his wife in the afterlife, and somehow he opens a portal that brings in an alien energy that takes over the body of a little girl, who wreaks havoc in our lives. I play the mom of a family on a road trip, and again, it allowed me to play a major emotional arc throughout the film. The director’s name is Macho [Pablo Macho Maysonet IV], and I sang “Macho Man” to him all the time on the set! It’s a different take on the genre—and open for a great sequel [laughs].