The 1980 TERROR TRAIN not only remains well-regarded by many fans of the era’s slasher cinema, but even managed to land a number of positive reviews back at a time when mainstream critics had their knives out for the genre. Now, in an era when horror has earned plenty of respect, comes a TERROR TRAIN remake that will please neither killer-film die-hards nor casual viewers, and might even give those who disliked the original TRAIN a new respect for it.

Premiering exclusively on Tubi today following a preview screening at the Brooklyn Horror Film Festival, TERROR TRAIN 2022 hews pretty closely to the specifics of its predecessor–right down to a main-titles shot of the titular conveyance emerging from a dark, smoky tunnel–save a bit of added lip service to current sociocultural concerns and a hilariously misconceived final act. Just as before, sorority girl Alana (Robyn Alomar) takes part in a fraternity prank in which a pledge named Kenny (Noah Parker) is tricked into cuddling up with a corpse, which sends the poor guy off the deep end. There is a departure from the ’80 film in that the way this Kenny looks, you can tell they won’t be going for the same twist further on…more on that later. 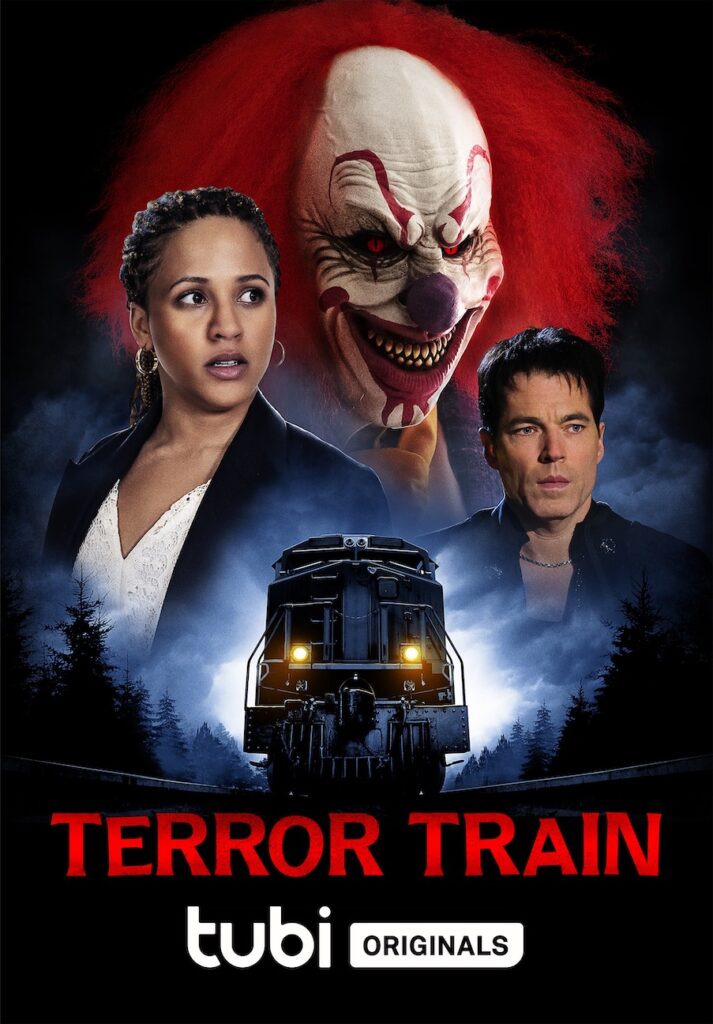 As we jump forward three years to the same frat/sorority group holding a Halloween (rather than New Year’s Eve) costume party on an excursion train, all the same key characters are in place, including Alana’s boyfriend Mo (Corteon Moore), her best friend Mitchy (Emma Elle Paterson) and Mitchy’s boyfriend Doc (Matias Garrido), the instigator of the prank. Doc has been reconceived as a one-dimensional Toxic Male that no self-respecting person, male or female, would want to spend any time with in reality; we do learn that his attitude problems led him to be replaced as frat president, though his Black successor (Dakota Jamal Wellman) doesn’t even get a name in the credits. Conductor Carne, previously portrayed by Ben Johnson, is now a woman (Mary Walsh), with most of that part of the story played out by her new assistant Sadie (Nadine Bhabha). And once again, there’s a magician (Tim Rozon) on board to provide entertainment, and act like either a creep or a decent guy depending on the whims of the scene.

As the CG train chugs through CG wintry exteriors, down a “barely used set of tracks” where there is of course no cell service, a mysterious killer begins a slaughter spree, with the first couple of slayings identical to those in the original but not nearly as effective. The gambit of the villain adopting the outfits of each new victim is also repeated, but not as much, so there’s less variety, and the first one is now that lowest-hanging fruit of scary costumes, a creepy clown. And where the ’80 TRAIN boasted the moody cinematography of Stanley Kubrick collaborator John Alcott, the ’22 edition has a colorful but flat and undistinguished look.

Meanwhile, the people on screen do little but flirt, discuss potential hookups, engage in those hookups and suffer demises that are occasionally quite gory but have no impact because there’s no reason to care about the victims. The resolution to the whodunit attempts both a red herring and a fakeout when it comes to the killer’s identity, but anyone familiar with the slasher genre–one popular entry in particular–will see the final reveal coming well in advance, and might be dumbfounded that this pilfered twist is being passed off as a fresh surprise. They will then, if the audience at that screening was any indication, greet both the climactic action and the attempt at a gotcha! closing shot with uncontrollable laughter.

It’s hard to figure out who this TERROR TRAIN was made for. Fans of the original will decry that it doesn’t do much that’s new, and that none of it is done very well, while newbies will be left wondering what it was about this story that warranted revisiting in the first place. It didn’t have to be this way–Syfy’s SLUMBER PARTY MASSACRE reboot a year ago turned out surprisingly well–though the ’22 TRAIN does serve a kind of backhanded purpose: With so much good horror out there these days, it’s a reminder of what the uninspired lower common denominator looks like.