I should preface this review with the confession that I’ve never found 1982’s SLUMBER PARTY MASSACRE quite as female-forward as its fans do. Despite the screenplay credit to feminist author Rita Mae Brown (whose work was heavily rewritten, and who vowed at the time she’d never see the film), there’s just as much gratuitous nudity and foolish behavior on the part of the teen heroines as there is solidarity. For my money, 1987’s SLUMBER PARTY MASSACRE II is a more interesting film, at least in the first half, which hints at the killer being a projection of the heroine’s anxieties before the bloodbath begins.

With empowerment becoming a key theme in horror over the past decade, it’s not surprising to see a new version of SLUMBER PARTY MASSACRE (debuting tomorrow night, October 16 on Syfy) emerge, upping the ante high on that theme. (It’s also apt timing, given that HALLOWEEN KILLS drops the ball on giving Jamie Lee Curtis’ Laurie any significant action.) Once again written and directed by women (Suzanne Keilly and Danishka Esterhazy respectively), it flips the script on traditional ’80s slasher tropes in a number of ways, some of which can’t be discussed here without spoiling things. 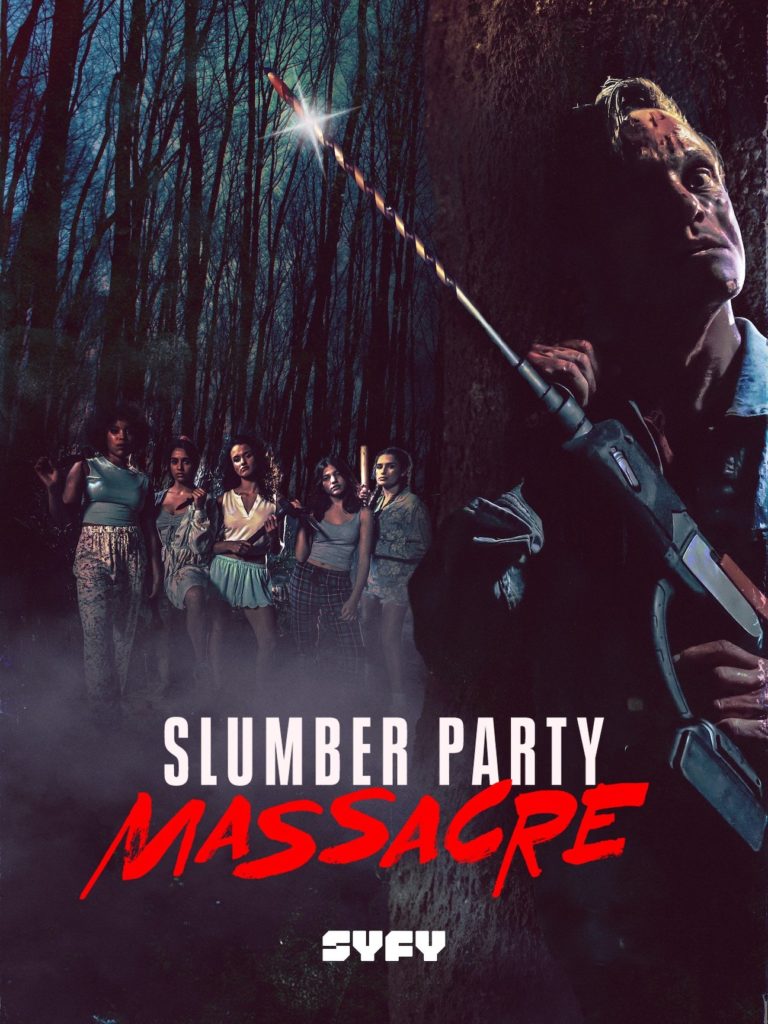 The remake opens in 1993 at an isolated lake house, where a group of girls bearing the same names as the original’s heroines are terrorized and slaughtered by a giant-drill-bearing madman once again named Russ Thorn (Rob Van Vuuren, who gives good crazy eyes). This time, there’s only one survivor, though she’s once again named Trish Deveraux, and when we arrive at the present, she has a teen daughter of her own, Dana (Hannah Gonera). Dana seems bound to repeat her mom’s history as she heads out for a remote-house getaway with besties Maeve (Frances Sholto-Douglas), Breanie (Alex McGregor) and Ashley (Reze-Tiana Wessels). Just as in ’82, there’s a younger sister involved as Maeve’s sibling Alix (Mila Rayne) stows away in their SUV; the original film’s main title music gets an encore here, and the developments on their trip–car trouble, an encounter with creepy locals at a general store–are completely par for the teen-kill pic course.

Once the girls wind up staying in a house right across the lake from the site of Trish’s original encounter with Russ, and the fabled “driller killer” proves to be not quite as dead as everyone thought, SLUMBER PARTY MASSACRE ’21 begins to get more playful and adventurous with the formula. It’s less a shocking, scary horror film (though there is plenty of gore) than a winking homage to/deconstruction of the genre’s tropes. Esterhazy’s credits include THE BANANA SPLITS MOVIE and Keilly previously scripted LEPRECHAUN RETURNS and an episode of ASH VS. EVIL DEAD, and they bring a similar tongue-in-cheek approach to this project, particularly in the way they bend gender standards. It turns out there are a bunch of dudes from the CRIME BANDITS podcast occupying that house Thorn once invaded, and they amusingly perform the kind of interchangeable dumb sex-object roles (two of them are literally known only as “Guy One” and “Guy Two”) usually filled by women in those bygone fright flicks. They even have slo-mo eroticized pillow-fight and shower scenes.

Thus, they’re not much help to the girls when Russ comes calling, though our heroines prove pretty capable of taking care of themselves. That’s not necessarily news by this point in horror’s history, though the filmmakers do manage to surprise and upend expectations a couple of times. The performances are all spirited, and Esterhazy keeps the pace brisk, successfully balancing a lighthearted tone with the suspense of who among the ensemble will survive. While honoring its predecessor (actually, predecessors–a guitar styled after the villain’s weapon in SLUMBER II figures prominently), this SLUMBER PARTY MASSACRE manages to carve out its own identity in a slasher-homage field that’s becoming almost as crowded as the genre’s initial ’80s boom.