Tribeca ’22 Movie Review: Motherhood is a frightening prospect in the engrossing “HUESERA”

Motherhood is often a powerful force for good in horror films, with maternal love and devotion serving as a bright light in the face of dark forces. A small subset of fright features, however, have taken a questioning attitude toward that idea, spotlighting women with conflicted feelings toward their incipient or present children. Jennifer Kent’s THE BABADOOK was one sterling example, and now Michelle Garza Cervera’s HUESERA, a double award-winner at the just-concluded Tribeca Film Festival, features a heroine who is literally haunted by the prospect of becoming a mom.

Valeria (Natalia Solián) appears to be happily married to Raúl (Alfonso Dosal), though they’ve been unable to conceive a child to round out their family. HUESERA opens as Valeria and her mother Maricarmen (Aida López) join a large flock of the faithful in worshipping before a huge golden statue of the Virgin of Guadalupe–a one-stop looming metaphor for the influence religion has over their lives. Indeed, when Valeria subsequently becomes pregnant, Maricarmen believes it’s a heaven-sent miracle. Not everyone in Valeria’s family is as enthusiastic, with her sister Vero (Sonia Couoh) expressing doubts about her capacity for motherhood based on a long-ago baby-dropping accident. The early scenes in Valeria’s old family home, which is conspicuously lower-class than the house she shares with Raúl, potently establish what Valeria left behind (ran from?) when she wed her husband. 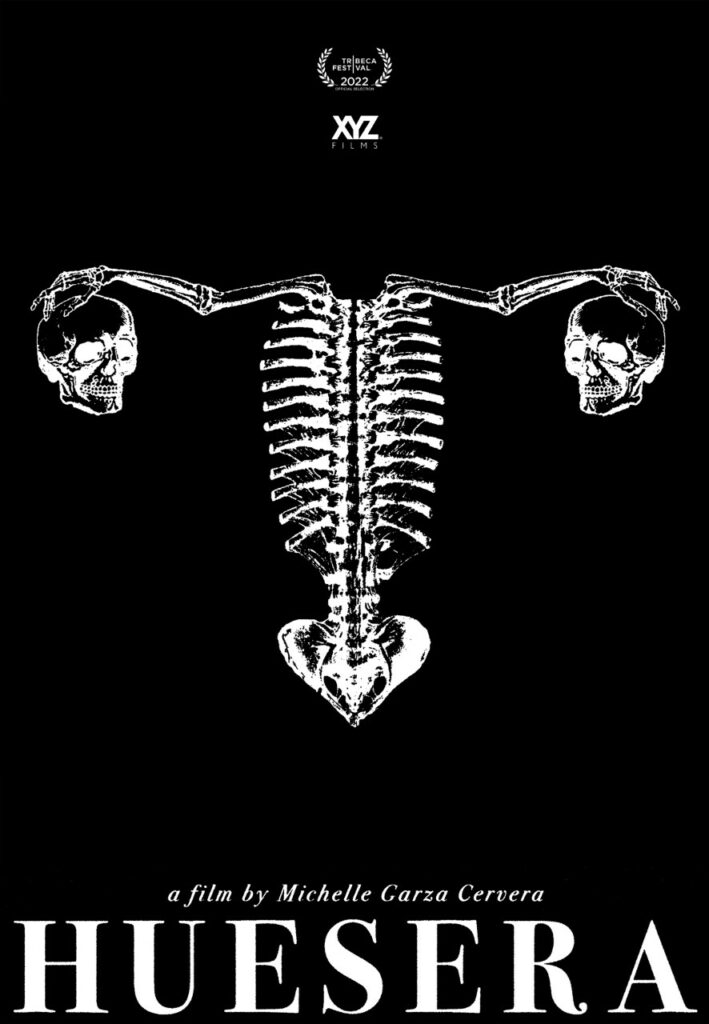 It is in her new home, however, that Valeria begins having frightening post-conception visions, starting with the sight of something awful happening across the street. HUESERA is the kind of chiller that backs into its horror content slowly, keeping it hovering on the margins for a good deal of the time, waiting to jump in and frighten Valeria and us at unexpected moments. Director Cervera and her co-scripter Abia Castillo’s approach to the supernatural material is largely subtle, to the point where the title isn’t explicated on screen; La Huesera is the “bone woman” of Mexican legend who collects skeletal parts, but there’s no visit to an occult expert to explain it, meaning that moniker will mean more to local audiences than international viewers.

Anyone of any background, however, will be able to appreciate the conflicts and consternation that Valeria, beautifully played by Solián, goes through. Even as she prepares for the new arrival, there are continuing reminders of the past she’s putting away–sometimes literally, as when she packs up a bunch of old horror and occult books while wearing a Cure T-shirt. A midfilm flashback explicitly reveals her days and nights hanging with a punk crowd, and a previous lover, Octavia (Mayra Batalla), who makes a reappearance in the movie’s present. And while all this is going on, the visions and visitations continue, seeming to contrive situations demonstrating that she’s not ready to be a mom. Could some subconscious desire to sabotage this major life change be the source of the spookery?

It’s a tantalizing question, one that adds a compelling extra level to a film that inverts the pregnancy-fear subgenre. HUESERA is not about something potentially being wrong with Valeria’s baby, but about her concerns that that child will take her further down a “normal” path she’s not ready to travel. Cervera and her creative team find numerous imaginative ways to visually express these ideas (including recurring spider and web imagery) while also paying off the expectations of a genre piece. The scares may be deliberately paced, but Nur Rubio Sherwell’s cinematography and the music by Gibrán Androide and Cabeza de Vaca set a mood that keeps you on edge throughout. The cast is solid from top to bottom as well, with Solián’s deeply felt lead turn well-supported by Dosal, whose Raúl can only remain so understanding as his wife appears to be going crazy, Batalla as the woman who offers Valeria an alternate life but isn’t going to wait forever for an answer, and Mercedes Hernández as Isabel, Valeria’s aunt and the most sympathetic in her extended family. The marriage of those domestic dynamics with traditional folklore are among the many qualities that make HUESERA a singular achievement on the international horror scene.