Long before streaming services were delivering instant content through optical fibers and wifi signals, television depended on analog signals. Not without its weaknesses, these analog broadcasts were susceptible to interference in a variety of ways. Back in the ’80s, video pirates pinpointed and capitalized on these weaknesses multiple times to hijack signals and interject bizarre lo-fi videos. The most famous instance included a person donning a Max Headroom mask and exhibiting some very curious behavior. Though investigated as a federal crime, the culprits of the Max Headroom broadcast were never caught and their motivations never uncovered.

Making its World Premiere at SXSW 2021, BROADCAST SIGNAL INTRUSION uses this fascinating historical event as the inspiration for it’s intriguing narrative. Directed by Jacob Gentry, the film’s tech-laced foundation stands boldly in line with Gentry’s filmography of trippy, sci-fi tinged stories. Following James (Harry Shum Jr.), the film takes place in late ’90s Chicago. Working as a video equipment repair man by day and transferring new station footage by night, James is a man coping with the loss of his wife. Disappearing under mysterious circumstances that hint at suicide (but don’t confirm it), the lack of resolution inhibits James’ ability to move on. After stumbling upon a creepy hacked broadcast transmission, James becomes intrigued. However, intrigue soon turns to obsession as he uncovers a potential personal connection to the signal and hunts to discover the motivations of the culprit behind the events.

While the style and execution of BROADCAST SIGNAL INTRUSION remains exceptional throughout, the emotional heart of the film seems to suffer because of it. As James digs deeper and deeper into the mysterious video hijackings, his obsession begins to blur the lines between fact and fiction. Upon learning these events may possibly be tied to the disappearances of several women — including his own wife — job obligations, recovery, and healthy boundaries begin to all fall by the wayside. Hints are dropped that this investigation may be nothing more than a subconscious distraction or coping mechanism, but this is never satisfyingly developed. Despite multiple allusions to James’ grief and struggle over the loss of his wife, it feels as if the character’s arch is never truly utilized to its full potential. Even with the introduction of the charismatic Kelley Mack as Alice, neither character really develops any real substance or depth. Although this may reinforce the noir-detective angle the film is shooting for, it ultimately leaves the ending feeling unsatisfying and a bit hollow. Balancing style with substance is a tricky thing and while not fully successful, BROADCAST SIGNAL INTRUSION plays a good game.

For fans of spooky mysteries, there’s more than just the killer premise to enjoy. The “Sal-E Sparks” characters featured in the broadcast intrusions vibrate on screen like glitchy, animatronic fever dreams. The red herrings and dead ends that James and Alice help ramp up the suspense and keep the momentum, and the claustrophobic sense of paranoia and conspiracy wonderfully calls back to political thrillers of the past. So, despite it’s minor flaws, BROADCAST SIGNAL INTRUSION remains a beautifully eerie neo-noir mystery drenched in analog terror. 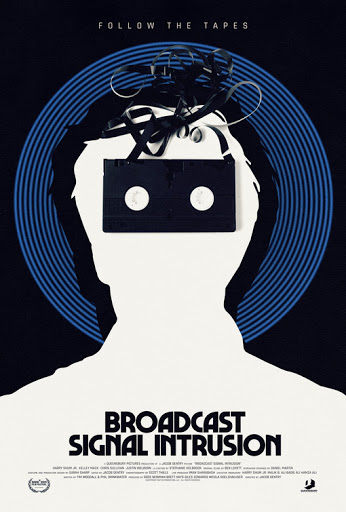