Bullied youths have been achieving or witnessing payback against their tormentors in horror cinema since Carrie White first went to her prom a little over 45 years ago, but rarely has the abuse itself been so horrific as in PIGGY (CERDITA). Writer/director Carlota Pereda’s expansion of her Goya Award-winning short of the same title is an unflinching study of the wages of shaming and a vengeance that could be achieved simply by proxy.

The titular nickname is just the least of indignities heaped on overweight teenager Sara (Laura Galán) living in a small town full of judgmental minds. She works in her family’s butcher shop (an easy metaphor, but an effective one), watches the more popular crowd from a distance and seeks escape through music on her headphones. But it’s hard to avoid teen cruelty in the age of social media, and a trio of mean girls, Maca (Claudia Salas), Roci (Camille Aguilar) and Claudia (Irene Ferreiro)–the latter a reluctant conspirator, for whatever that’s worth–mock Sara and her family on Instagram. 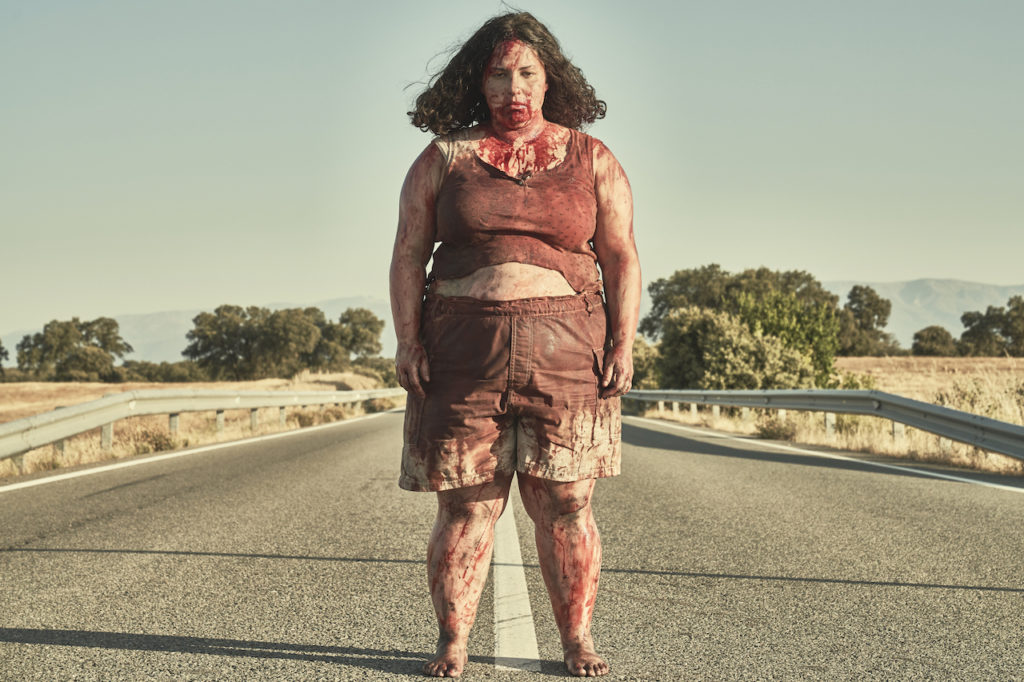 They later show up at a pool outside of town when Sara ventures there one morning with nobody else around, viciously harass her and almost drown her. They then steal her belongings and take off, and the traumatized Sara is forced to make the long walk home clad only in her bikini. The trio’s attack on Sara is hard to watch, unflinchingly staged and shot by Pereda and cinematographer Rita Noriega, as is her trek down lonely, sun-blasted rural roads, interrupted only by a gang of passing guys who also assault her. But getting back to the pool: It actually wasn’t completely deserted when Sara got there, as a creepy-looking stranger (Richard Holmes) was briefly hanging around. And as Sara continues her walk, she comes upon a van idling on the side of the road, that same guy in the driver’s seat–and sees a terrified Claudia through the blood-streaked rear window, screaming at Sara for help before the vehicle departs with the pitiless three trapped inside.

Pereda virtually remakes the short version shot for shot in PIGGY’s first act, with one small but crucial difference. In the short, the kidnapper returns Sara’s possessions to her before driving off; in the feature, he instead leaves her one of the abducted girls’ towels. This gives Sara something to cover up with, but it can also be seen as a shared totem, a memento of the ghastly crime that will surely follow. For the crux of both PIGGYs is that Sara doesn’t report what she’s seen, leaving her three enemies to their fates. And in expanding the story, Pereda suggests a kinship between Sara and the villain, a serial killer who has already murdered a lifeguard and another local girl, and isn’t about to stop there.

Is he sympathetic to her, perhaps a victim of abuse himself playing Sara’s angel of vengeance? Perhaps not, considering a later scene that takes place in her house, and although the two have further encounters, PIGGY only flirts with the idea of some kind of twisted relationship between them. The real focus is on what happens between Sara and the rest of the town, including her own family, specifically her overbearing mother (Carmen Machi). She has little sympathy for Sara’s travails (“Don’t they call you fat? Eat less then” is a typical line) but can still play the mama bear when both the police and Claudia’s own mom (Pilar Castro) pursue Sara for details they’re sure she knows about the missing girls. This knowledge–or the withholding of it–becomes power for Sara, and PIGGY becomes an engrossing study of a perpetually put-upon young woman shedding her victimhood under the most dire circumstances.

Galán, who was actually in her 30s when she made the film, perfectly captures the emotions and nuances of a teenager beleaguered from every side, and both she and Pereda refuse to sentimentalize Sara or her troubles. Shooting in a 1.33:1 format that boxes Sara in, the director maintains an unflinching point of view as she breaks free of her emotional confinement. There are no punches pulled when the going gets horrific, either, and the graphic violence is occasionally leavened with dark humor (a slashed throat transitioning to a sliced watermelon). A different kind of bloodshed occurs when Sara has her period while under duress in the police station–perhaps a knowing shout-out to CARRIE in a movie that takes the revenge-of-the-bullied theme in different and even starker directions.