Sundance ’22 Movie Review: Looking for a mind-trip? You’ll dig “SOMETHING IN THE DIRT”

A set of Russian-doll wind chimes hangs in the courtyard of the building where almost all of SOMETHING IN THE DIRT (world-premiering at the current Sundance Film Festival) takes place, providing a fine little metaphor for the movie itself. The latest mind-teaser by Justin Benson and Aaron Moorhead features the duo as a couple of guys who, attempting to make sense of a strange phenomenon–or perhaps because they have nothing better to do–embroil themselves in a riddle wrapped in a mystery inside an enigma (to quote Winston Churchill).

It beings with Levi Danube (Benson) waking up in an apartment where water leaks from a wall and one of the doors won’t close. A new arrival to the building, he makes friends with John Daniels (Moorhead), who’s been there a decade. As they hang out and get to know each other in that courtyard, helicopters fly low above them, heading for a nearby wildfire that sends constant clouds of dark smoke into the sky. It feels like an impending apocalypse, a world gone crazy, and the weirdness begins infesting Levi’s pad as well. At first, it’s simple: a crystal ashtray levitates, casting a psychedelic light show on the walls. G-g-g-ghosts? The duo certainly think so, and birds flying into Levi’s door provide further hints that something unearthly is going on. And the pair become obsessed with figuring out its meaning while capturing it all on video–because, of course, that kind of movie could sell for millions at a film festival. 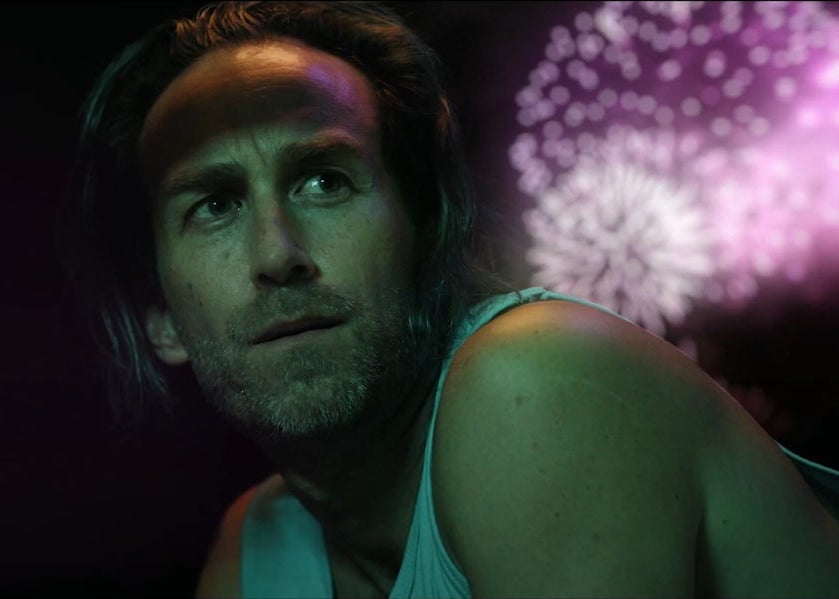 This humorous mixture of cerebral and pragmatic motivations on the guys’ part runs all through SOMETHING IN THE DIRT; later, as the camera rolls, John calls out, “If you’re a ghost, do something.” A moment later: “Different. Do something different.” Yet what the spirits, if indeed there are spirits, do becomes less important than what it all means, as Levi and John fixate on the available clues–also including mathematical symbols drawn on the frame of that obstinate door. They descend into a rabbit hole of odd theorizing and obsession, and as performed by the filmmakers, it becomes both funny and eerie to watch, as it becomes clear no good can come of this, whether there is in fact a paranormal presence hanging around or not.

The movie is also energized by Benson and Moorhead’s presentation: SOMETHING IN THE DIRT is a mock-documentary wrapped in a mock-doc about that mock-doc inside a narrative feature, peppered with brief insert shots, stock footage and talking heads. These secondary characters are both Levi and John’s interview subjects and commentators apparently discussing the whole situation after the fact, offering the viewer a many-layered cinematic onion to unpeel. Some of the most fun bits are excerpts from the filmmakers’ own childhood home movies pressed into this story’s service, as when a young Benson is seen querying a NASA employee about time travel.

SOMETHING IN THE DIRT makes for an intriguing companion piece for Benson and Moorhead’s previous THE ENDLESS, though the two films are unconnected plotwise. They also starred in that one as well, playing brothers revisiting the scene of childhood trauma that plunges them into increasing weirdness; here, they’re strangers at the start who become bonded by their fixation on unexplained phenomena, feeding off each other’s fascination on a path that can lead to madness. As before, they prove to be as convincing as actors as they are shrewd as filmmakers, creating the ultimate pandemic genre production: A movie that not only makes the most of very limited resources (two guys and an apartment), but also expresses the way minds in isolation can compensate for a lack of external stimuli with ever-stranger preoccupations.

The film is dedicated to “making movies with your friends,” and is populated with numerous fellow filmmakers in brief roles, such as Sarah Adina Smith (THE MIDNIGHT SWIM), Issa Lopez (TIGERS ARE NOT AFRAID) and SINISTER/DOCTOR STRANGE scripter C. Robert Cargill. There’s no sense of insularity here, though; while it doesn’t necessarily provide the traditional satisfaction of explicating all of its mysteries, SOMETHING IN THE DIRT welcomes any and all viewers to play the mind game Benson and Moorhead have created, and as always, that offers plenty of off-kilter pleasures of its own.