Movie Review: “STUDENT BODY” Gets An “A” for Effort, but Fails In Execution

High School Horror is having a bit of a moment. While always a genre mainstay, films centered on teenagers between the formative grades of 9 and 12 are finding more favor with audiences looking for a bit of brutal fun. Recent hits like Freaky (2020), Fear Street 1994 (2021), and Scream (2022) all point to a new generation of teen slashers. Adding its name to the mortarboard hat is STUDENT BODY, Lee Ann Kurr’s tale of a murderous high school mascot stalking five prep school students. Kurr has definitely done her homework, adding in all the necessary ingredients like a fun pop soundtrack, witty dialogue, and trendy fashion. The film even boasts a terrifying villain, a retro woodsman toting a huge sledgehammer. But these ingredients never quite come together. Odd character development keeps the story from ever feeling cohesive and uneven pacing slashes any attempt to build tension and dread. Though there are moments of joy and terror, STUDENT BODY, ultimately commits the cardinal teenage sin; it feels like it’s trying too hard.

Jane (Montse Hernandez) is a student at an elite private school struggling to fit in after a mysterious tragedy. Despite lingering hostilities and a complicated relationship, her popular cousin Merritt (Cheyenne Haynes) takes the girl under her wing. When unwanted attention from her draconian calculus teacher, Mr. Aunspach (Christian Camargo), puts Jane on the outs with Merritt and her friends, she tries to win back their favor by hacking the school’s new security system for a weekend trip to raid the gym teacher’s secret liquor stash. But the students are not the only ones haunting the halls and they soon find themselves the target of a brutal killer disguised as the school’s alpha male mascot.

As the anchor of the film, Hernandez is both relatable and touching in her vulnerability but a lack of backstory leaves her “shy girl trying to fit in” archetype wearing thin by the final act. Her popular Girl Boss cousin Merritt has a bit more characterization, but Kurr can’t seem to decide if we’re supposed to like her or not. Ironically, she has a bit too much backstory, the elements of which often conflict with each other. It’s hard to get a read on who either girl is or the nature of their family turmoil. What should be the central relationship of the film feels more like a stereotypical battle between the alpha and the outsider with little humanity to draw us in. 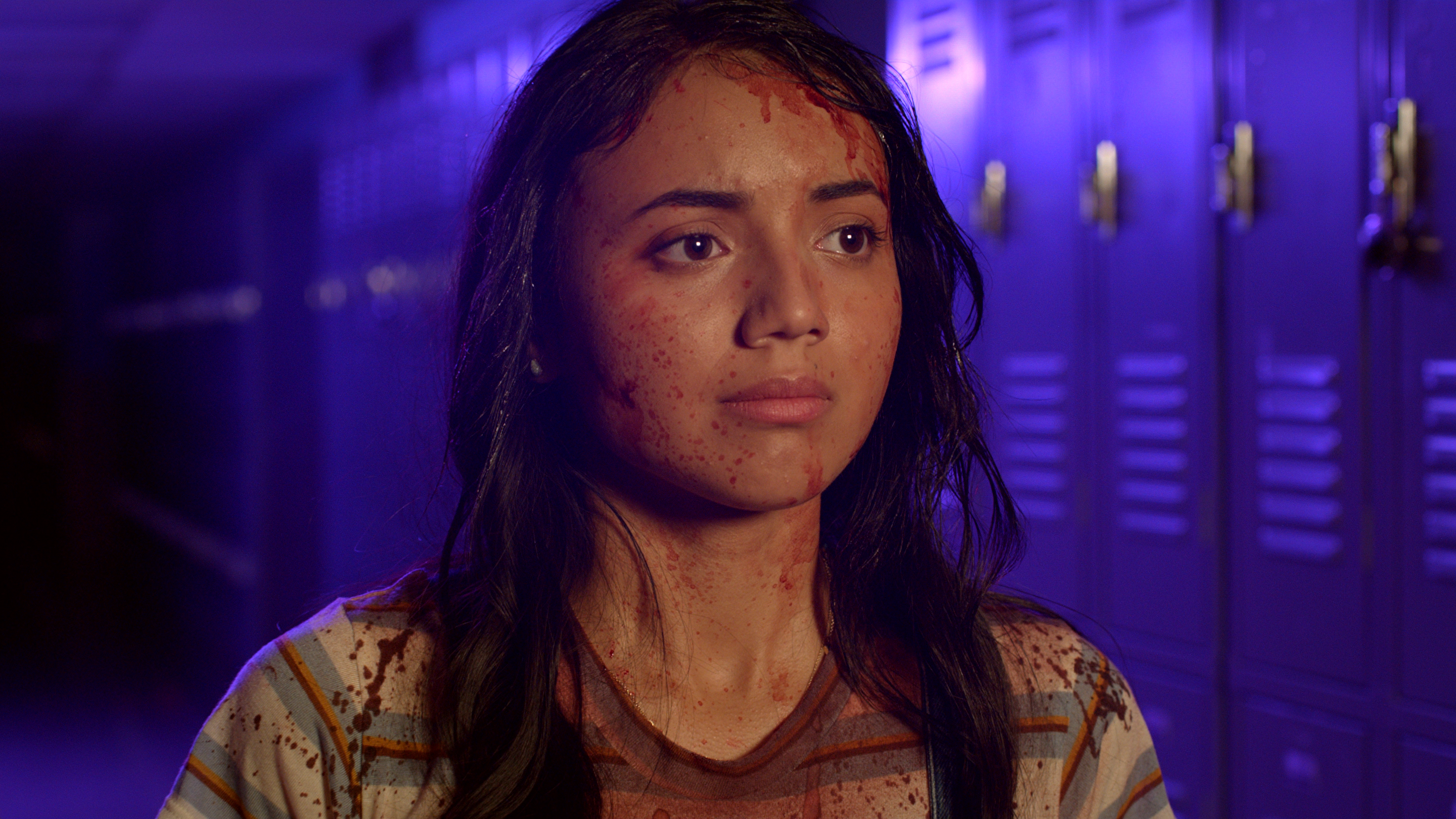 This lack of characterization is frustrating because there’s a lot to mine with the cousin’s relationship. A photograph of the two with a woman who is presumably Jane’s mother and a brief mention of a tragedy involving tall trees allude to an interesting past that could inform both girl’s motivations. But we’re never given any more than this and what could have been an interesting wrinkle in the plot feels frustratingly under-explored. Late stage revelations and a cathartic monologue finally add humanity (though maddeningly few details) to the relationship and lead to one of the most compelling moments of the film. But rather than providing closure, the moment stops dead in its tracks: the ramifications of said conclusion are never revisited and we revert back to the traditional final girl narrative.

This is true of all the characters, who feel like approximations of reality rather than actual people. Popular boy Ellis (Anthony Keyvan) is kind to Jane, but his only character trait seems to be the improbable habit of photography, complete with a darkroom. Harley Quinn Smith is Nadia, the alpha soccer player who’s razor sharp edge and seething anger may hide endearing shyness. Austin Zajur steals the show as Eric “Frenchy” French, the bumbling but good-natured friend obsessed with becoming the school mascot. But each of these descriptions comprises the whole of their characterization. All five students seemingly exist to check off a narrative box and they rarely feel like genuine friends. Clumsy attempts to humanize each character only serve to draw more attention to the paper thin foundations they are built on.

More successful are the film’s two villains; Mr. Aunspach is a malevolent math teacher who gleefully punishes any student not naturally gifted at calculus. He gets off on controlling the fates of his students and sees his teaching as a gift to bestow only on the students he deems worthy. The attention he shows Jane is inappropriate, but the entire interaction feels strange and it’s hard to get a sense of where either character stands. Their relationship edges right up to the line of sexual abuse and grooming, but Kurr seems afraid to go there, leaving us with vague implications and strangely extreme consequences. But STUDENT BODY is at its best when leaning into the iconography of its masked killer – the school’s woodsman mascot. Wielding a heavy sledgehammer, he is both ominous and powerful, exerting his dominance over his victims. As a reminder of “simpler” times, he is an effective and deadly stand-in for patriarchy itself. 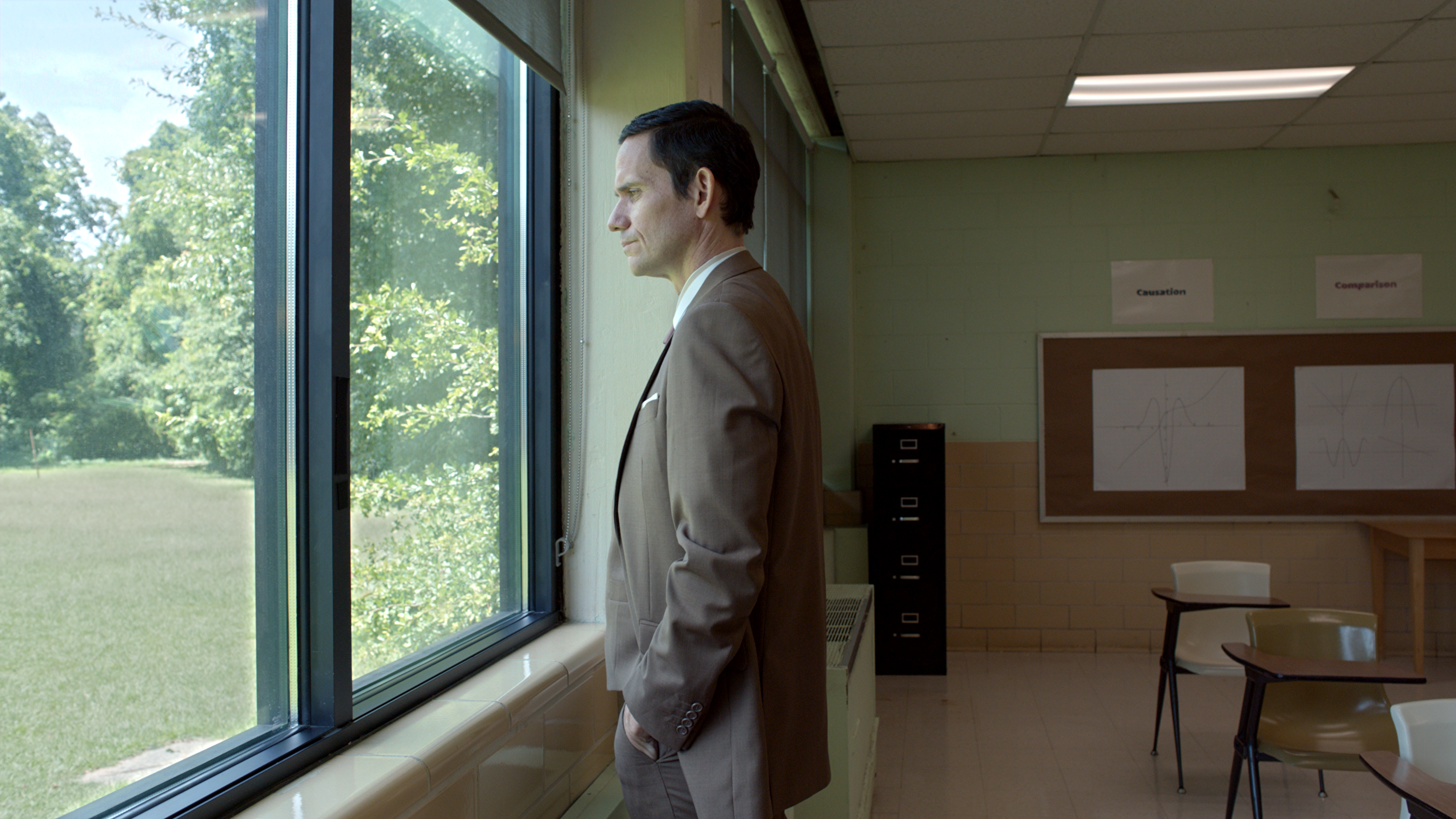 Though the Mascot is frightening, the film’s tension all but grinds to a halt once the killings kick off. Deaths are brutal, but they often occur way too quickly or just off screen, a frustrating omission for the sub genre. One poignant and empowering moment is stopped dead in its tracks by a single swing of the sledgehammer, a brutal kill that would ordinarily feel devastating in its finality. But the single moment also serves to kill the most compelling element of the plot, throwing away a character just when they are becoming interesting. Long stretches of uneventful searching removes the tension that should be a slasher film’s lifeline and the killer’s tactics are frustratingly erratic. An entire scene plays out in a room where we already know the mascot is hiding and the only reason for a delay in the next attack seems to be a need for narrative exposition. When we finally find out the motive beneath the mask, it’s difficult not to feel disappointed. The entire plot seems constructed around a few lines of dialogue during the final showdown, but the lack of story development leading up to it leads to eyerolls rather than “Hell yeah” fist pumps.

Though devoid of most horror elements, the film’s first act has a lot of heart. The youthful exuberance is contagious and smart musical choices lead to moments of pure joy. But the effervescence ceases when the horror elements kick in and we’re left with a series of murky relationships, unclear arguing, and frustrating cliches. This could be excused if the slasher sequences were stronger in execution, but the film’s back half drags on with long periods of confusing inaction. Each time Kurr presents an intriguing character detail or plot line, it’s almost immediately shut down, leading to feelings of frustration rather than the intended fear and intrigue. By the time the climax arrives, the emotional stakes are long gone.

STUDENT BODY is strongest when it evokes the carefree joy of being a teen. High points lie in musical moments where the five friends simply enjoy spending time together, breaking the rules and living in the moment. But a teen slasher needs effective scares as well and, other than a visually striking killer, they are sorely lacking. The film essentially veers off course in its second act, leaning on horror cliches and empty imagery. Shocking moments that never pay off and dangling plot threads fuel viewer resentment and confusion and despite a strong start, STUDENT BODY is a fail that’ll leave audience asking for a retake.