When the T+E reps invited me to the set of Eli Roth Presents: A Ghost Ruined My Life for a “walk-on role,” I gave the term a cursory google before accepting. Not that I’m all that camera-shy these days, mind you – between Rue Morgue TV and ye olde Instagram, I’ve become well acquainted with being on camera, but I hadn’t done any acting since my high school production of Little Women. Still, a walk-on role, as per the internet, is just what it sounds like – a gig walking through a scene as a background actor – and I was confident enough in my walking abilities to accept.

This particular show, airing on Discovery+ in the U.S. and T+E in Canada during its Creep Week event (running October 8-16, with Season 2 of Eli Roth Presents: A Ghost Ruined My Life premiering Friday, October 14 at 10 p.m. ET/PT), recreates real-life anecdotal accounts of hauntings, recreated dramatically as per Executive Producer Roth’s signature cinematic style. Shot mostly in my home province of Ontario, my partner Dustin had actually worked in the art department on the show, so my walk-on not only presented the opportunity to see how the sausage gets made, so to speak, but to witness the slaughterhouse from whence I’m brought home my proverbial bacon. So I agreed, and after a negative COVID test and a series of emails with wardrobe and makeup, I was slated to appear in the episode titled “Fire of the Damned.” 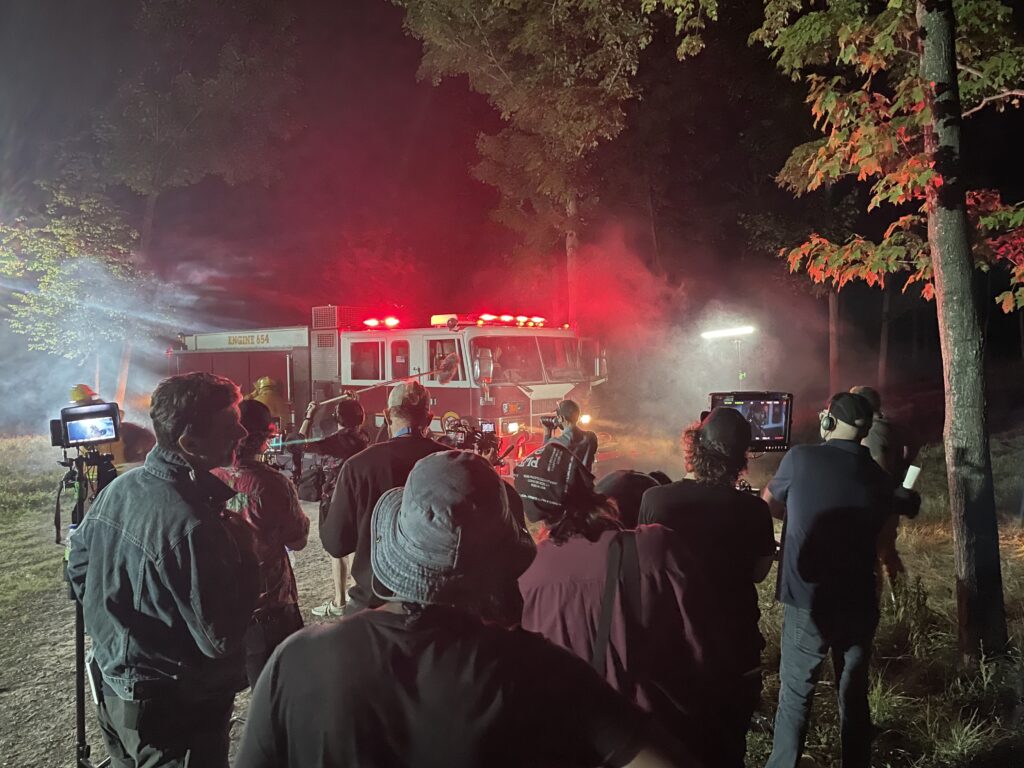 Speaking of the correspondence with wardrobe and makeup – I was asked to provide a selfie and a description of my hair and skin type, and to show up in “late summer” attire without logos. Blending into the background has never been my forte, so makeup and wardrobe had their work cut out for them. What fun I had listing my tattoos and describing my unconventional haircut! To my relief, wardrobe and makeup were pretty chill. DeAnne provided some “earth tone” garments (as literally everything I own is black and/or covered in BlackCraft Cult logos), and Bronte said I could do my own makeup so she could focus on “breaking me down” with blood and bruises and the like.

Oh, did I forget to mention I’d been cast as a car accident victim? I’d been sent the episode script prior to the shoot, so I was vaguely acquainted with the story – the protagonist whose life had been ruined was a fireman, who witnessed the death of some poor soul he wasn’t able to rescue in time (thereupon to be the life-ruining ghost). My role was the driver of the other vehicle – presumably responsible for the accident, although no breathalyzer test was in the script. Less a walk-on than a stretcher-ride of a role, I was surprised to learn I had lines to deliver to a paramedic as they shone a light in my eyes and poked me for injury – standard paramedic stuff. My lines were easy to memorize (“I don’t know what happened, he came out of nowhere. Is he going to be okay?”) but of course, the hardest part for the amateur thespian was delivering them with some semblance of real emotion. 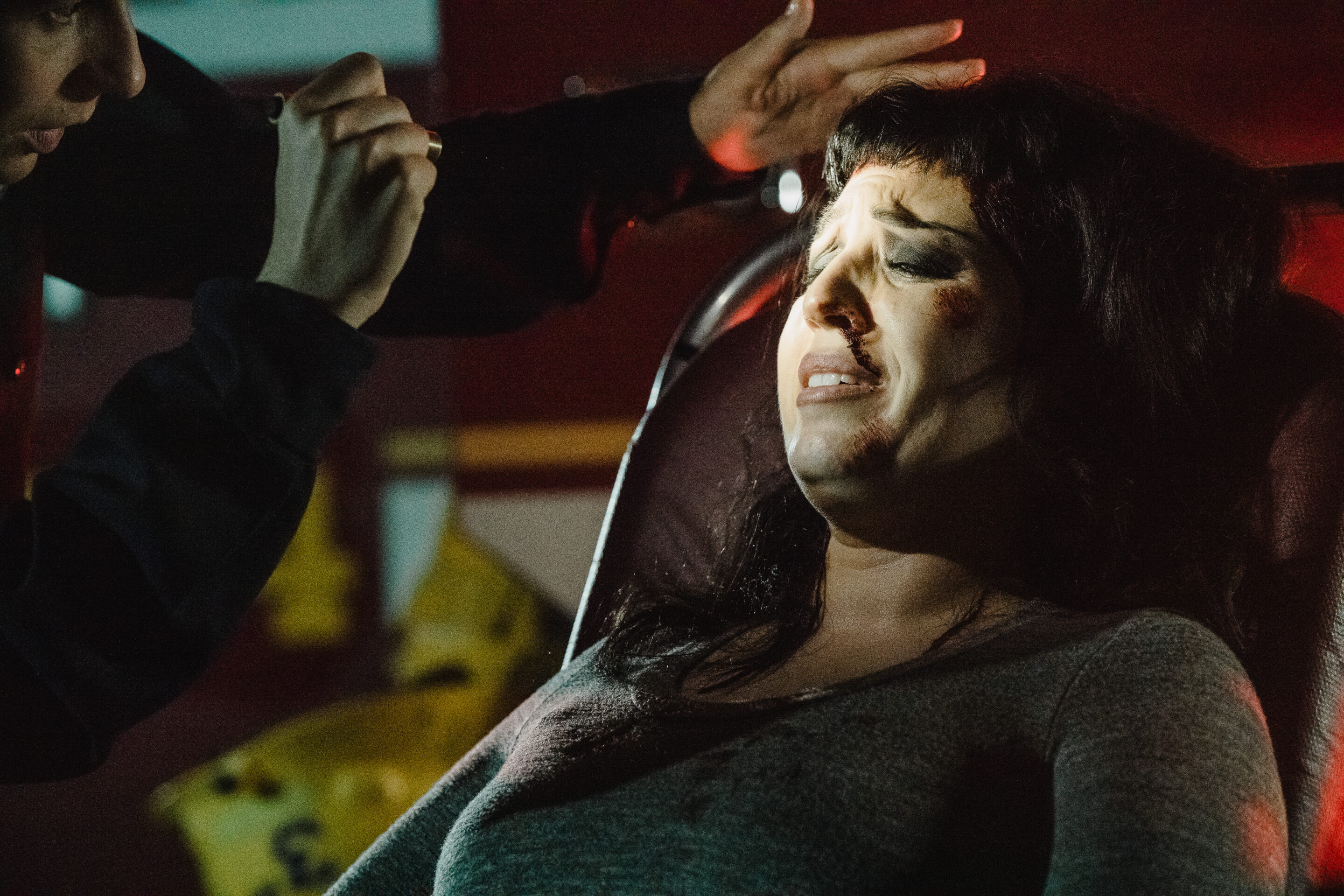 I can’t remember the last time I faked crying – probably my college years, selling a sob story to a prof to see if I could boost a D+ up to a C out of pity – and it’s not as easy as the soap operas make it look, folks. What’s more, the actual shoot saw me repeating the line again and again, with the giant camera moving ever closer to my contorted pain-face. You know how words start to feel weird and alien when you’ve repeated them too many times? That happened. Ever aware that ugly-crying wasn’t a cute look, I tried to imagine the pain and terror of the situation while the woods around me came alive with the flickering of the ambulance lights and the IRL attack of ravenous mosquitos that we swatted at between shots. 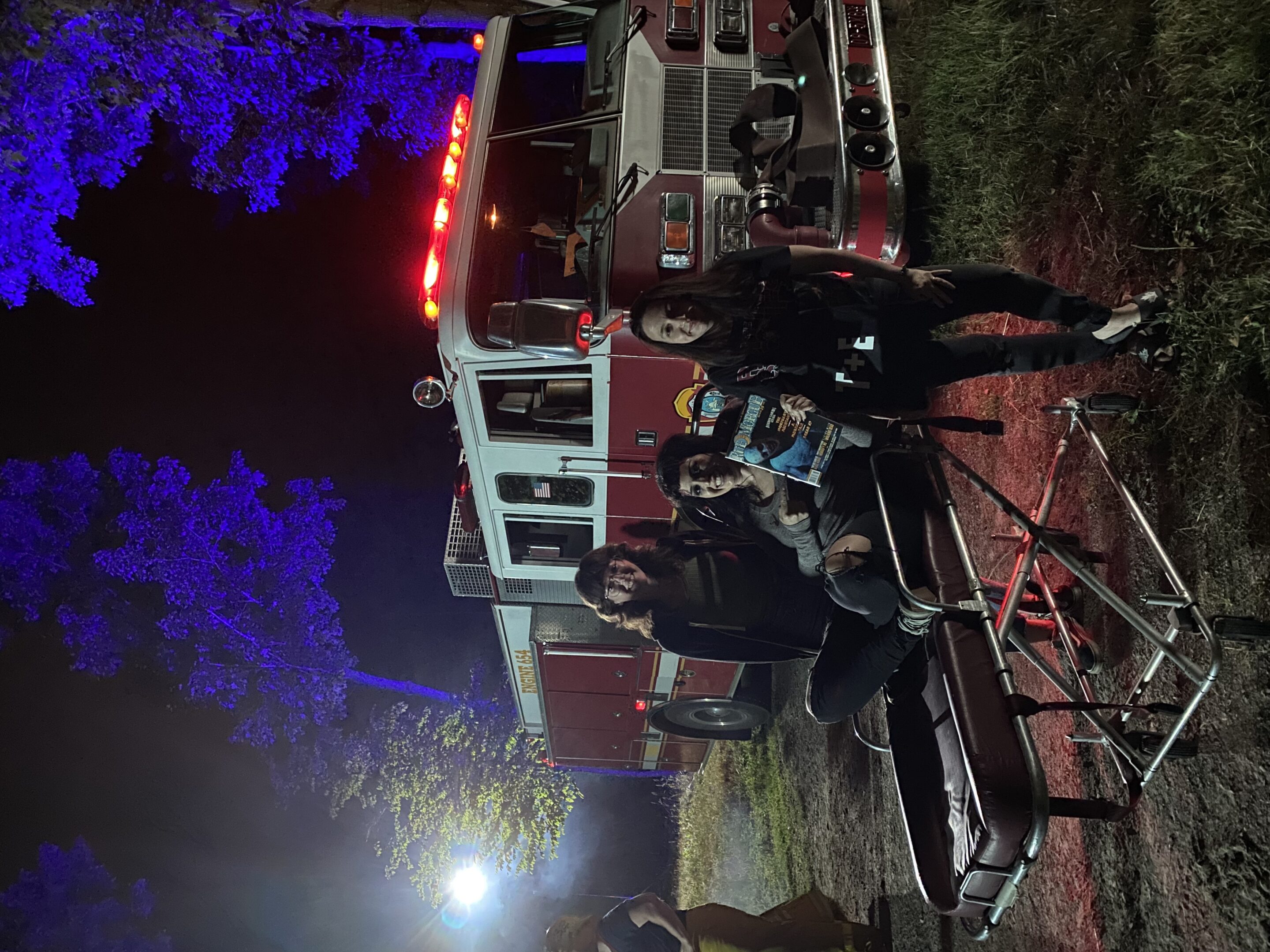 Overall, I’m inclined to doubt I’ll be quitting my day job for the glitz and glamour of prime-time TV stardom anytime soon, but I had a blast with the cast and crew on my set day! Big thanks to Jakki and Andrea for hanging out with me all day, ever diligent with the deep woods bug spray and snacking on the best butter tarts I’ve ever had! Be sure to catch my debut on T+E’s Eli Roth Presents: A Ghost Ruined My Life on November 25 at 10 p.m. ET/PT.