It is my prediction and secret hope that David Bruckner will soon become one of the biggest and best names in horror. From his segments in V/H/S and Southbound to his 2017 feature debut The Ritual, Bruckner has proved time and time again that his penchant for stylish direction and talent for portraying characters with emotional integrity make his films moving as well as terrifying. However, THE NIGHT HOUSE is a new high for Bruckner, who has found a bona fide horror star in the prolific Rebecca Hall (The Town).

THE NIGHT HOUSE, which premiered at Sundance in 2020 and saw wide release in 2021, is a paranormal psychological thriller with the simple description “a widow begins to uncover her recently deceased husband’s disturbing secrets.” Scripted by Ben Collins and Luke Piotrowski (Super Dark Times), THE NIGHT HOUSE takes twists and turns that feel earned and deserved by the narrative, which sucks the viewer deeper and deeper into the darkness of Beth’s waking nightmare with each minute of its snappy runtime. 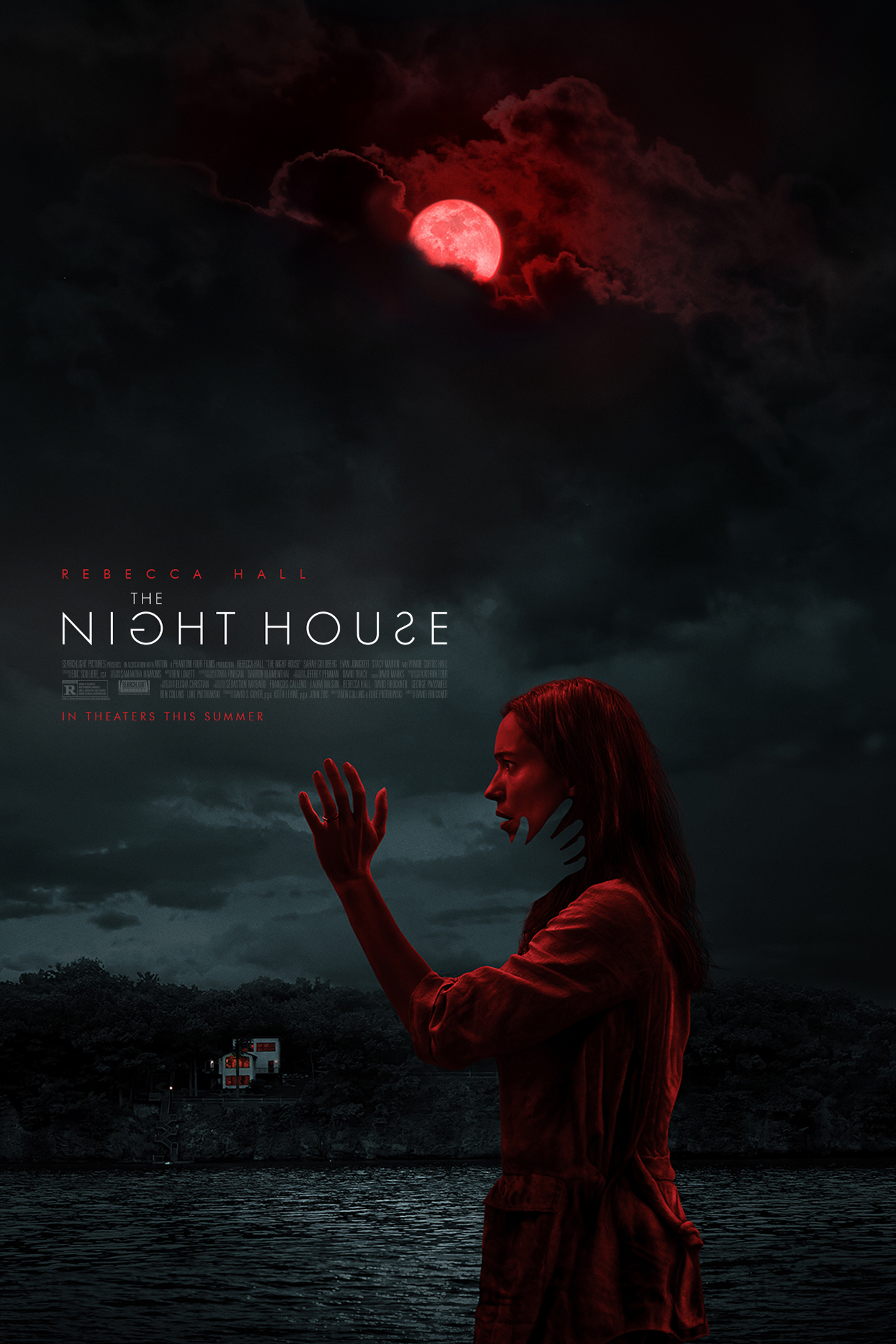 The audience is first introduced to Beth (Hall) only a short time after her husband Owen (Evan Jonigkeit) had unexpectedly taken his own life. Left living alone in the secluded house he built for their life together, Beth is haunted by a mysterious presence that either is the ghost of Owen himself or merely pretending to be. The presence guides Beth across Lake Skaneateles to the opposite side, where she finds an unfinished construction perfectly mirroring her and Owen’s house. This “Night House,” which first only appears to Beth in her dreams, reveals both Owen’s darker side and the true nature of the presence that haunts her.

Unfortunately, due to THE NIGHT HOUSE’s extreme vulnerability to spoilers, I shan’t say any more about the content of the plot. However, there is no shortage of praise to rain down on Rebecca Hall’s performance as she skillfully carried the emotional burden of the film. Both the lines and Hall’s delivery of them make Beth’s experience of grief an incredibly authentic and accessible one. Her humor is dry and acidic as she navigates the awkwardness of discussing her husband’s suicide with well-wishers, friends, and complete strangers. Her fear and hope that her husband’s spirit has returned to her are contagious, and the terror she experiences when she finally learns the truth is tangible; it jumps off the screen.

Other fantastic elements of THE NIGHT HOUSE include the unsettling score (Ben Lovett) and the creative cinematography (Elisha Christian). Lovett, who also scored Bruckner’s first film, creates a seamless sonic atmosphere for the film, which works in harmony with Christian’s visual style. It is worth mentioning that the cinematography in particular is essential to how the presence is depicted in THE NIGHT HOUSE, which appears the negative architectural spaces of Beth’s lakeside home. While jump-scares may be overtired, the horror sequences are electrified by Bruckner’s direction.

Despite initially premiering in 2020, THE NIGHT HOUSE should largely be considered one of the best horror releases of 2021. If it has been a long time since a horror movie has actually scared you, I highly recommend renting THE NIGHT HOUSE. While you’re at it, check out The Ritual on Netflix as well! If you – like me – found yourself disappointed by the likes of Malignant or Last Night In Soho this past year, I guarantee that THE NIGHT HOUSE is the film for you. With a reboot of Hellraiser on the way, David Bruckner is a director to keep an eye on.

THE NIGHT HOUSE was released on August 20, 2021, by Searchlight Pictures and is currently available to rent on most streaming platforms.