The word surreal gets thrown around a lot whenever a film is anything less than straightforward. False starts, false conclusions, dream sequences, dreamlike imagery, over-the-top acting, stilted dialogue, off-beat humor and, of course, flat out nonsense are all benchmarks of surreal film. The thing that many filmmakers forget when making a surreal picture is that there has to be a point to the madness, sometimes to enmesh the audience in the insanity of the plot, or otherwise to help viewers click in to the possible unreliable nature of reality, to name two. WOODLAND GREY doesn’t seem to want the audience to engage in any of that, instead being slow and weird for weirdness sake, in a way that is neither thoughtful nor rewarding. 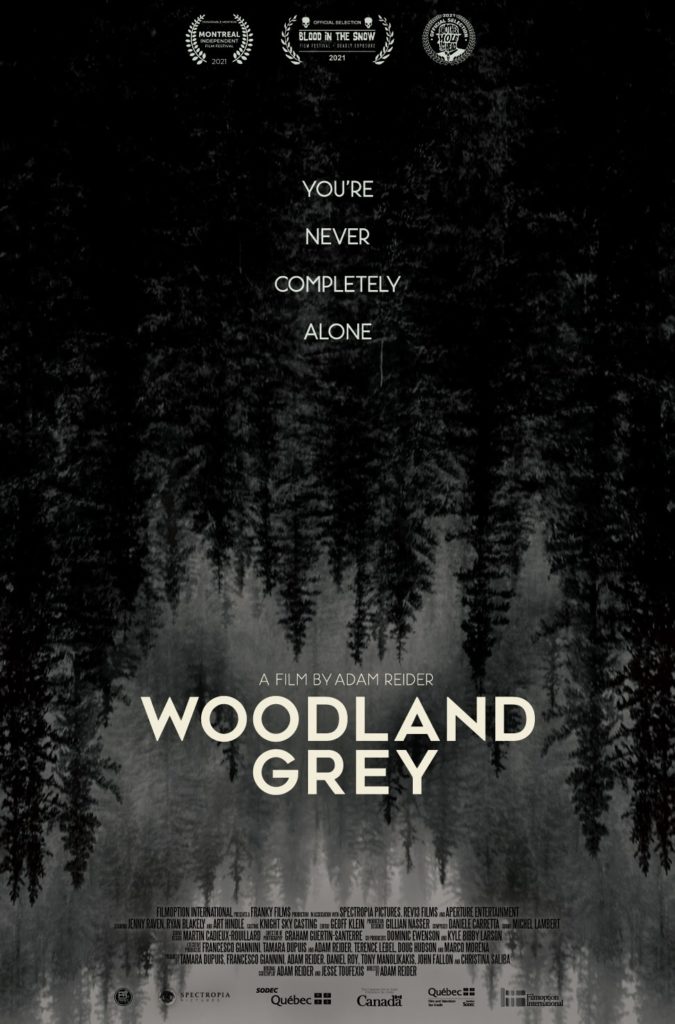 At first, the film follows (at an annoyingly leisurely pace) a woodsman named William (Ryan Blakely, Dream House, The Expanse) who doesn’t talk much and catches rabbits in snares. The music would have you believe that he is up to something sinister, but the composer must know something the audience doesn’t, since it all looks like pretty standard living in the woods stuff, apart from a makeshift shed, which honestly, could just be used for storing firewood. Maybe city folk are simply supposed to be flummoxed by the idea of someone living in the woods. There’s also some mysterious whistling, so there’s that.

Eventually he comes across an injured Emily (Jenny Raven, Flatliners, Black Mirror) who has jacked up her knee and head pretty bad. He silently nurses her back to health, while also ominously not speaking and refusing to let her leave. Emily takes this surprisingly well, which may be the first in a series of under or over reactions that will play out. Emily insists she can’t stay long, as she needs to make a doctor’s appointment soon, without expanding on why. She also tries to make banal conversation, which is either met with complete silence or a complete explosion of anger.

We eventually learn that Emily’s grandfather has recently died, and in order to get some peace of mind, she goes on a hike, an activity she used to do with her grandfather. She unfortunately can’t go hiking for too long, since she needs to be back for blood dialysis on a regular basis. This adds a ticking timebomb into the plot, but Emily’s lack of external symptoms kind of lack any emotional punch for viewers.

While limping around the campgrounds (a thing that injured people totally do) Emily discovers the aforementioned shed, which seems to contain a little girl! GASP! The composer was right, there was a reason to fear that shed! Emily goes to free the girl, William intervenes bodily, Emily refuses to let it go, etc. You can kind of see where this is going, Emily is going to release the girl from the shed and things aren’t going to be as they seem. The moral message of “maybe strange white men have a good reason for locking up women” always seems like an odd one to me, but hey.

Obviously this is where spoiler territory really cranks up, so the rest of the review will be intentionally vague. The girl from the shed is weird as hell, wearing a bunny mask and coming and going from the campgrounds. Emily can’t seem to leave the forest. Everyone seems to be hiding something, and multiple dreams get confused with reality. And by the end of it, there are a lot of questions with very little answers. Is the forest hell? Is it a place of fantasy? Is it a dream? You decide!

Here’s the thing with “you decide” when applied to films or television; it can’t be vague on purpose. The writer/director needs to have a clean vision as to what is happening, and then show as much or as little of that as they feel is artistically necessary. To excuse using the lowest hanging fruit in the surreal tree, David Lynch frequently does this. He knows exactly what is going on, and simply doesn’t hand hold the audience to the conclusion, but all the clues are there. There might not be a wrong conclusion, by Lynch’s own admission, but there is definitely one that aligns more with the creators vision. WOODLAND GREY doesn’t seem to have that original vision, instead opting to provide clues and red herrings that point to multiple conclusions, while really sticking the landing with none of them.

The acting is one of the saving graces of the film, something that might not be obvious at first. During the first few scenes, Jenny Raven seems amateurish and wooden, but then you have to remember that you’ve seen Jenny in lots of things (for this reviewer, it was mostly Kim’s Convenience) and she knocks it out of the park in other roles. The fact is, she must be seeming unnatural on purpose, which definitely adds to the vibe of otherworldliness that the film is going for. Both Raven and Blakely capture people as characters caught up in a unnatural play, reacting as their supposed to be still caught up in something bigger, and more sinister.

You might be wondering why I haven’t mentioned Art Hindle yet, since I’ve repeatedly described him as “Canada’s greatest export” and the reason for that is simple: he’s barely in it. He’s brutally under utilized, and actually says “charlies” while describing a war memory, so even when he is utilized, it isn’t properly.

Still, some great music, some competent directing, occasional gore and some great performances make WOODLAND GREY something that might be worth catching to the right audience. Plus it’s always a good idea to support independent Canadian films.