Having sponsored the Hollywood crossovers of Takashi Shimizu (THE GRUDGE) and the Pang Brothers (THE MESSENGERS) in the 2000s, Sam Raimi as producer has now backed a new-generation Asian-American filmmaker with Iris K. Shim’s UMMA. Despite empathetic performances by leads Sandra Oh and Fivel Stewart, it’s a well-intentioned but unfortunately underdeveloped combination of Korean supernatural folklore and universal familial tensions.

Oh plays Amanda, who lives “off the grid” somewhere in what appear to be the hills of California, where she ekes out a living as a beekeeper, selling organic honey and doing the books for local merchant Danny (Dermot Mulroney, bringing easygoing charm). She’s been raising her teenage daughter Chris (Stewart) in an almost Amish-like existence with no electricity, which she insists will make her sick. We know from the start that there’s more to her aversion than that, as the movie opens with quick flashes of young Amanda (then named Soo-hyun) being tormented by her mom and tortured with sparking wires. “Umma” is Korean for “mother,” and it’s clear that although Amanda has long since left this abusive relationship behind, she hasn’t escaped its psychological repercussions. 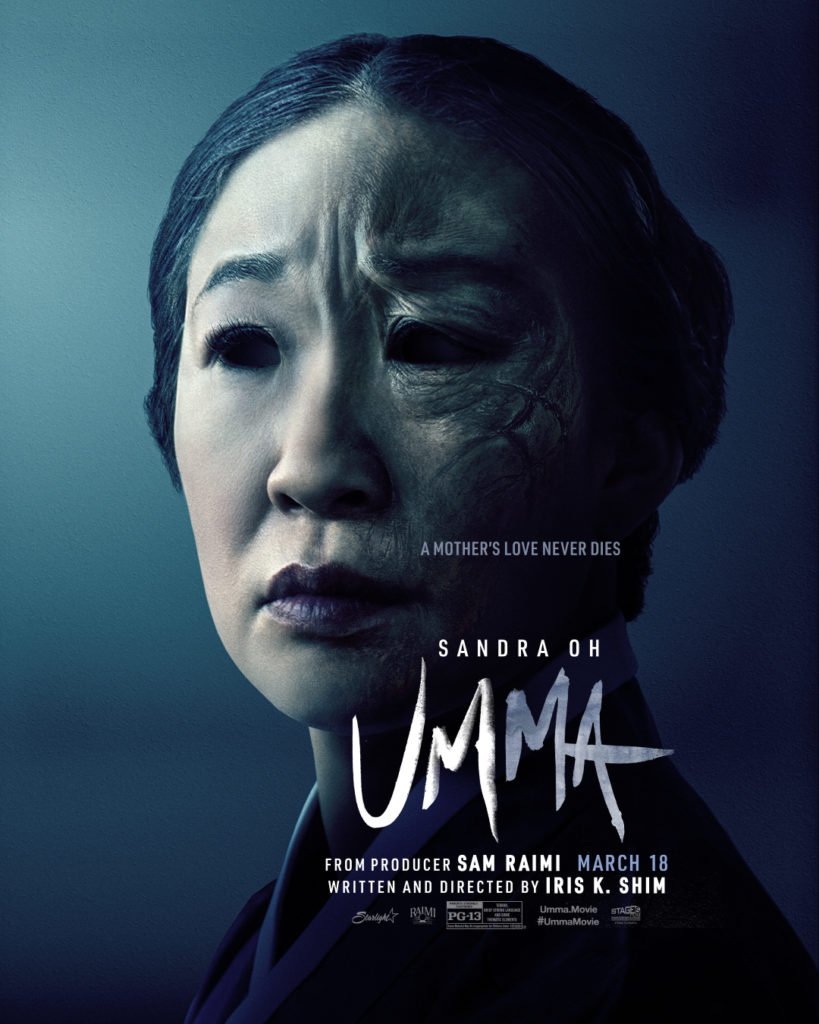 Shim deftly establishes Amanda and Chris’ simple, isolated life, which the latter, who’s now old enough to (secretly) apply to college, is starting to chafe against. There’s a quick, telling moment establishing that Chris has not been raised to speak Korean, involving Amanda’s uncle (Tom Yi, bringing the movie a brief jolt of angry energy). He arrives to inform Amanda that her umma has died, and to chastise her for leaving her family behind. He also drops off a suitcase containing her mother’s cremation urn and a few belongings, and along with these physical objects, her spirit appears to dwell within it too. Soon Amanda is suffering not just flashbacks, but in-the-moment manifestations of her malevolent parent, who seems determined to claim her soul and turn her against Chris.

Oh gives a heartfelt reading of a woman desperate to escape the grip of the past who now must struggle with its literal return and its influence on her behavior toward her own daughter. She shares a warm chemistry with the equally thoughtful Stewart, who also has some affecting scenes with Odeya Rush, playing Danny’s visiting niece who tries to guide Chris toward pursuing a life outside of the honey farm. For all the well-meaning attempts to explore its characters, however, UMMA doesn’t dig quite deep enough; some of the ingredients are familiar (Chris’ clandestine attempts to get away to college), others aren’t developed to their full potential. The same goes for the genre tropes, and Amanda/Soo-hyun’s situation is made evident enough early on that UMMA can only deliver briefly startling moments instead of an ever-dawning sense of true terror.

The 83-minute running time suggests that there might once have been a longer version of UMMA that truly engaged with its promising ideas. Shim might have profitably had Amanda and the audience wrestle with the question of whether her umma is a literal or just a mental apparition; as it stands, there’s little doubt and not too much surprise regarding what happens with her. Nor is there enough engagement with the specific Korean mythology that supposedly underpins this haunting, but only gets glancing mention. In addition, the backstory feels shaky; we learn in the second half that Amanda was left to be her mother’s sole, long-suffering caregiver, which doesn’t square with her uncle denouncing Amanda for abandoning her mom years ago. The solid cast and craft on display make it all the more disappointing that this introduction of a new voice on the horror scene doesn’t have quite enough to say.