Movie Review: There Are Few Signs of Life to be Found in Simon Barrett’s “SEANCE”

Simon Barrett is an exciting name in the horror genre. His previous writing credits, You’re Next and The Guest both have strong cult followings and ardent defenders. Directed by his friend and fellow mumblegore regular Adam Wingard, both films play with genre tropes in fresh and exciting ways and bring out the fun in bloody and slightly mean-spirited stories. Barrett’s latest film, SEANCE, promises more of the same: an exclusive girl’s boarding school is haunted by the vengeful spirit of a former student. But SEANCE’s premise is more exciting than its execution. Barrett steps into the role of director resulting in a vaguely entertaining, if slightly lifeless supernatural slasher. Uneven pacing and a lackluster lead resign what could be an exciting ghost story to a tedious tale perhaps best served as the background watch at a slumber party.

The students of Edelvine Academy can’t seem to stop pulling pranks on each other. Led by mean girl Alice (​​Inanna Sarkis), a small group of seniors pass the time at the exclusive prep school by designing elaborate ways to scare each other. When one of their ruses backfires and ostensibly causes the death of fellow student Kerrie (Megan Best), they begin to suspect they’re now being haunted by the school’s resident ghost. When a new student, Camille (Suki Waterhouse), arrives to fill the coveted roster spot, the girls conduct a seance to find out what really happened and once again find they’ve conjured up more than they bargained for. Now they must solve the decades-old mystery before becoming the next victims of the Edelvine ghost. 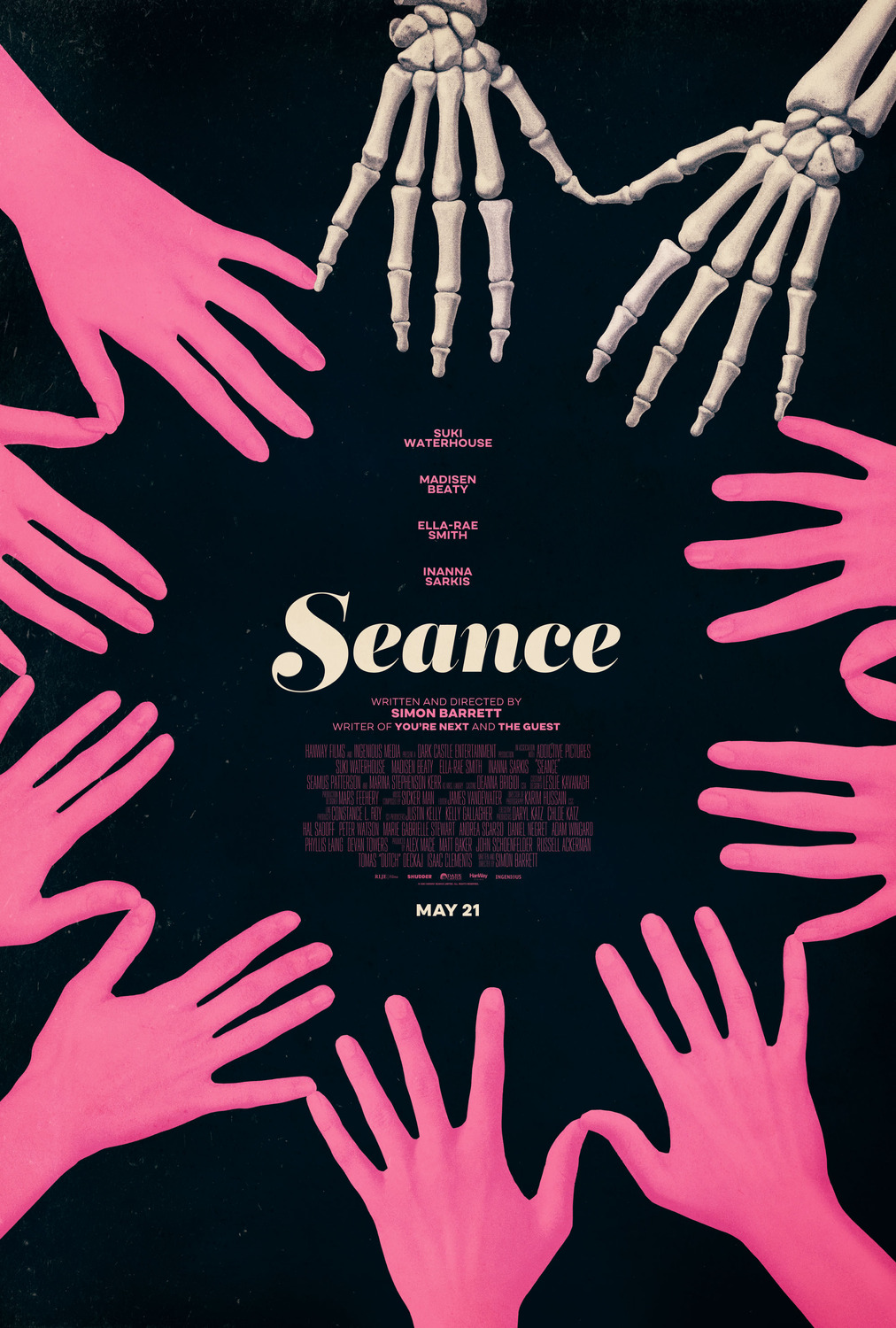 On paper, the concept is exciting; a modern mix of occult rituals, urban legends, and masked killers. But there are perhaps one too many gotcha pranks that begin to grate on the nerves even when we’re in on the joke. The cast itself feels vaguely lifeless, mostly solid performances but no one role that stands out above the others. Waterhouse is rather boring as new student Camille, a poor approximation of You’re Next’s fantastic final girl, Erin (Sharni Vinson). Ella-Rae Smith is compelling as her shy, if a bit needy, friend Helena. The larger problem is that none of the girls are particularly likable, and combined with a bland final girl and a thinly defined ghost, we’re left with little to care about.

SEANCE’s first half delivers as a compelling supernatural slasher. Moments of creeping dread are aided by an exceptional sound design. Barrett uses admirable restraint in showing his monster and the supernatural elements of the story are effectively scary. The boarding school atmosphere feels both warm and ominous, a perfect setting for the minimalist creature design. But the promising story falls apart in the back half, with a preposterous twist and a reveal that only sort of hangs together.

Barrett’s witty script would likely work in the hands of a more accomplished director, but the tone is frustratingly inconsistent and the film never seems to find its groove. There are exciting moments of gore, but many of the kills are essentially bloodless and unclear. We’re left wondering if some of the victims are actually dead. Barrett has historically not been afraid to pull his punches so the lack of satisfying set-pieces throughout feels odd for a slasher. Also confusing is the complicated third-act twist that is unnecessarily drawn out for unclear reasons. The final battle contains exciting moments but otherwise feels exhausting and overwrought.

SEANCE contains all the ingredients for a fun supernatural slasher, but the film never quite reaches the joyous moments of intoxicating carnage in his previous works. You’re Next and The Guest succeed because of a less-is-more approach to storytelling, allowing actions to guide us through the narrative rather than dialogue or exposition. Perhaps a firmer directorial vision would add cohesion and life to this killer script and premise, but SEANCE struggles under the weight of its own explanations, and the plodding conclusion strains the limits of logic. It’s not bad, it’s just not particularly fun; arguably the most important element in a teen horror slasher. Rather than graduating head of its class, SEANCE commits the ultimate sin of being simply fine.