Movie Review: “THE UNHOLY” becomes difficult to believe in

Nine years after THE POSSESSION, which plumbed the dark side of Jewish faith, Sam Raimi and Rob Tapert’s Ghost House Pictures and actor Jeffrey Dean Morgan have reteamed for THE UNHOLY, which takes on the far more well-worn tenets of Catholicism and the ways in which they can be perverted. It’s the kind of movie where the camera does a slow zoom in to a statue of the Virgin Mary, and you just know it’s going to start weeping blood.

To be fair, this isn’t the umpteenth possession movie–at least, in the sense of the devil overtaking an innocent person’s soul. Something a little more devious is happening in the religious little town of Banfield, Massachusetts. Morgan plays Gerry Fenn, a journalist who once had a flourishing career but is now writing for one of those weird-but-true websites, haggling with his half-his-age editor over the size of his fees. He’s sent to Banfield to check out a potential case of cattle mutilation; that brief investigation has a funny punchline, and lo and behold, the field where it happens is also the site where, as we see in an 1845-set prologue, a young woman was subjected to an especially torturous hanging. A creepy doll totem (known as a “kern baby”) was buried at the tree’s base, and when Fenn unearths it, he thinks it’s a good idea to shatter its head for a photo op. That seems to make him responsible for all the troubles that follow, but the movie doesn’t engage very much with that idea. 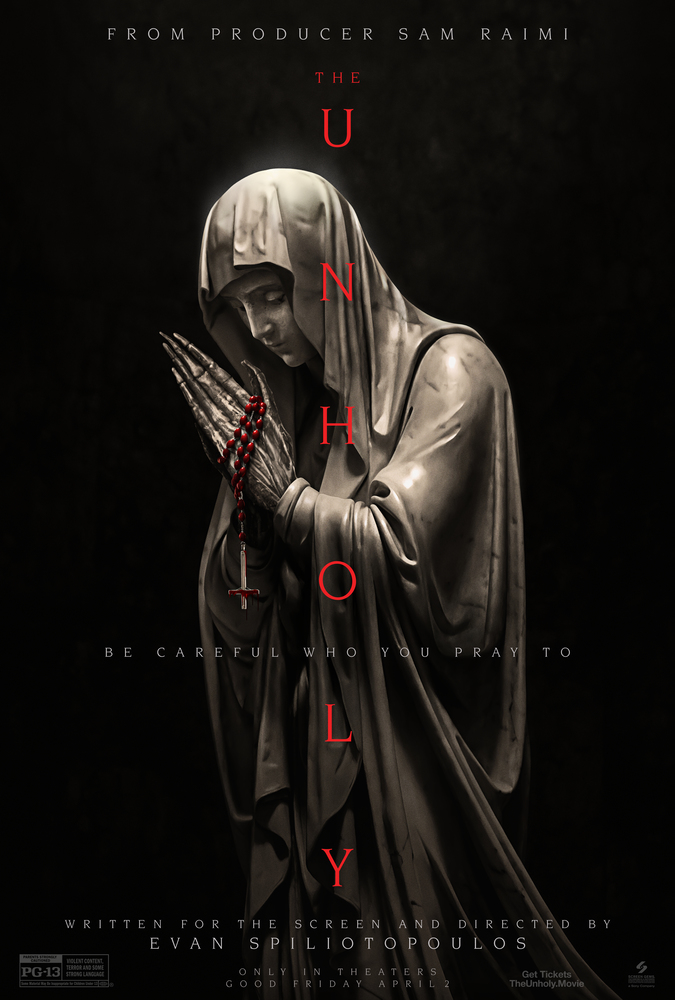 Instead, the focus becomes his involvement with a deaf teenage orphan, Alice Pagett (Cricket Brown), who lives with her uncle, local priest Father Hagan (William Sadler in a more spiritual role than we’re used to seeing him play). On his first night in town, Fenn witnesses Alice visiting the tree and fainting; she is soon and suddenly able to hear and speak, and also capable of performing similar miracles upon others in town. She claims to hear the voice of Mary guiding her, which sends the faithful both in Banfield and around the world into a tizzy, though she refers to this influence simply as “the lady.” And it’ll be no surprise that, when we’re given a good look before long at “the lady’s” actual form, it’s a twisted and twitchy, J-horror-esque figure with a hooded face.

Evan Spiliotopoulos, who scripted (from James Herbert’s 1983 novel SHRINE) and directed THE UNHOLY, is a horror first-timer, having spent a number of years writing both animated and live-action features for Disney. So it’s perhaps understandable that a good deal of the scary sights in THE UNHOLY are familiar stuff like those mentioned above, plus an ancient journal with demonic drawings found behind a church wall, etc. There are a few good bits, like a Bible’s text liquifying and sliding off the pages, and Spiliotopoulos is good with atmosphere; he and cinematographer Craig Wrobleski make effective use of both low and overhead angles to set their moods. Points off, though, for the use of digital fire at several points during the movie.

And the challenge of condensing Herbert’s sprawling novel into a single feature film is one Spiliotopoulos hasn’t surmounted. There are a number of story elements that don’t get enough space to breathe; in particular, Katie Aselton, despite her second billing, plays a character so trivial and inconsequential to the action that she could have been eliminated at no loss to the overall film. Brown fares better, imbuing Alice with a true beatific spirit that holds just a touch of malevolence behind it. Sadler’s natural intensity is tamped down by his role, while Cary Elwes employs an overdone Bahston accent (not as persuasive as the one used by Guy Pearce in last week’s religious chiller, THE SEVENTH DAY) as a bishop who sees in Alice a way to enrich the faith of a worldwide flock, and maybe his own standing too.

Fenn also believes Alice is his ticket to bigger things, establishing himself as the sole holder of the rights to Alice’s story and press access to her. Although he describes himself as a lapsed Catholic, his is a crisis not of religious belief but journalistic ethics, as we learn that his downfall came as a result of fabricating stories for a high-profile paper. Yet THE UNHOLY doesn’t take Fenn or his story far enough; he’s not sufficiently ruthless or unprincipled for his character to have true bite. He’s regretful from the movie’s start (“Good God, Fenn, you were gonna win a Pulitzer,” he bemoans in an early scene), and there’s little doubt at any point that deep down, he’s a good guy who will ultimately do the right thing. THE UNHOLY might have been more interesting if he was a secondary character allowed to really cut loose with his scheming, and the lead was Alice, so we could see more of her wrestling with the untrustworthy presence that has given her her hearing but threatens to take away so much more.