“I fear this one will be different from the others,” says Keith David’s Father Louis to his disciple at the Baltimore, 1995-set beginning of THE SEVENTH DAY. That line throws down a gauntlet, considering this is about the 300th exorcism flick, a subgenre that has largely proven itself to be exhausted of ideas. But give writer/director Justin P. Lange credit: In THE SEVENTH DAY, he’s created the first mashup this critic can think of between the possession and buddy-cop movies.

Too bad you can’t give him as much credit for this as you can for THE DARK, his 2018 feature debut that found new, imaginative and dramatic possibilities within the zombie-film form. THE SEVENTH DAY does open with some intriguing promise, as the rite performed by Father Louis and the younger Father Peter Costello (Chris Galust) coincides with an American visit by the Pope. The Papal presence is purely incidental, though, as this prologue proceeds through the usual: the Lord’s Prayer is recited, the room starts rumbling, a bound little boy taunts the priests in a deep demonic voice, yadda yadda yadda. 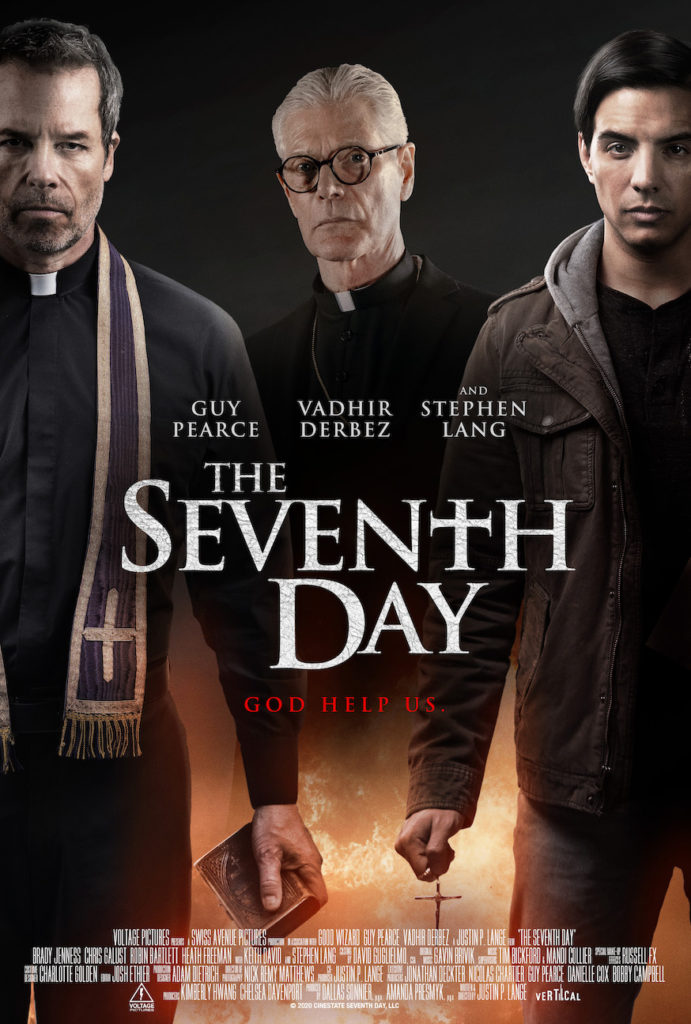 It inevitably comes to a bad end, and we hook up again in the present day with Father Peter, now played by Guy Pearce and living in New Orleans while sporting a Bahston accent. According to the local Archbishop, played by an unrecognizable Stephen Lang, “There has been a precipitous rise in reports of demonic possessions,” and yet the Vatican now disapproves of the performing of exorcisms, which makes Father Peter something of a rogue cop. He is also, essentially, the cynical older cop showing the ropes to a green younger cop, the latter being Father Daniel Garcia (Vadhir Derbez), who has the education but not the experience. So Father Peter takes him out for some on-the-job training, or as he puts it, “I’m giving you one day to prove that you’re worth my time.”

Just as in the police-movie paradigm that gives THE SEVENTH DAY its dramatic spine, the duo are destined to find themselves smack in the middle of a Big Case, here involving another young boy, Charlie (Brady Jenness), who has murdered his entire family. He is now languishing in a psychiatric ward, but Father Peter believes he’s harboring a demon. Could this be the same one that imbued the boy in Baltimore, the one Father Peter tells Father Daniel he has “a score to settle” with? In the course of the pair’s investigation, Lange stages a couple of effective sequences: Father Daniel visiting Charlie’s home and experiencing visions of the conflicts and bloodshed that occurred there, and a police-station setpiece in which the director and DP Nick Remy Matthews make nerve-jangling use of flickering lights. There’s also a scene that seems to be a tweak on cinematic standards, as the priests stop by the most cheerless roller-skating rink you’ve ever seen.

For every one of these, unfortunately, there’s something awkward like an early trip to a tent city under a bridge, which comes to an unintentionally chuckle-worthy ending. The initial amusement at the appropriation of TRAINING DAY-esque standards for a supernatural scenario runs dry as the familiar beats keep getting hit, and the final act is motivated by a plot twist that doesn’t come as a huge surprise. Pearce seems to having fun with a role that doesn’t give the actor enough to do, and neither does the part of Father Daniel, whom Derbez (son of Latin American screen star Eugenio Derbez) chooses to underplay, sometimes to the point of indifference. Indeed, with its under-90-minute running time, THE SEVENTH DAY could have used more fleshing out in both its plot and its characters. The conclusion in particular gives it the feel of a series pilot to be followed up with further adventures, rather than a self-contained story.