Movie Review: “THE SCARY OF SIXTY-FIRST” takes on a true-life terror

Remember that trailer for TEAM AMERICA: WORLD POLICE that proclaimed, “Alec Baldwin…Sean Penn…Michael Moore…George W. Bush…and Kim Jong Il…are all going to be really, really mad when they see…”? The same could be said for Prince Andrew and THE SCARY OF SIXTY-FIRST. It’s highly unlikely the prince would approve of what is done with and on photos of him in THE SCARY OF SIXTY-FIRST, which finds filmmaker Dasha Nekrasova processing her outrage over the Jeffrey Epstein scandal in genre terms both classic and modern, fueled by anger and the aesthetics of horror cinema past.

The opening scenes are your traditional setup of a couple moving into a highly desirable Upper East Side duplex, wondering why they’re getting such a good deal on it, and then discovering the place is haunted. In this case, friends Noelle (Madeline Quinn, who scripted with Nekrasova) and Addie (Betsey Brown) find a couple of clues about the apartment’s unsavory past–strange stains on a mattress, a mirror on the ceiling–before learning that it was once owned by Epstein, who brought young girls there to take advantage of them before his arrest and subsequent suicide. Nekrasova doesn’t need to spend any time explicating her villain here; Epstein is as ready-made a malefic presence as the devil, or Hitler, and here the filmmaker expresses in two different ways how the evil that men do lives after them. 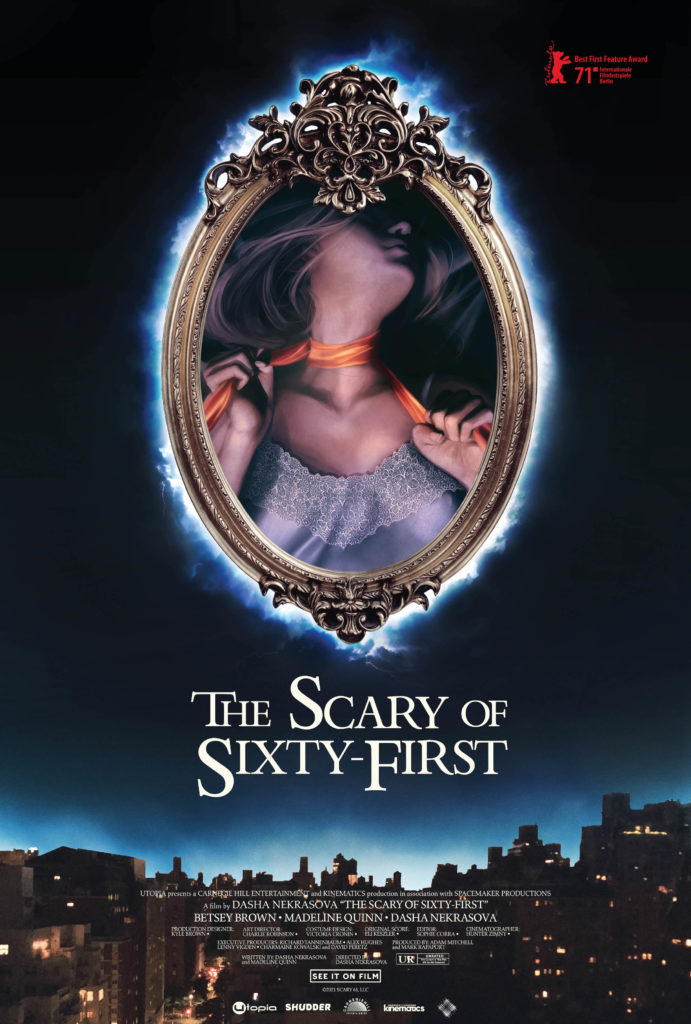 Epstein becomes an obsession for Noelle, fueled by the arrival of a woman (billed only as The Girl and played by Nekrasova) who turns up at the apartment with a head full of conspiracy theories. While they’re indulging in Vyvanse-fueled deep dives into the copious Epstein material on-line, Addie begins descending into bizarre, manic sexual behavior that has her fetishizing those Prince Andrew pictures and behaving like a little girl in bed with her disgusted boyfriend Greg (Mark Rapaport). Addie doesn’t seem possessed by one of Epstein’s victims, exactly; rather, it feels like Epstein’s own ghost is influencing her into being a compliant, enthusiastic conquest, which adds an extra level of creep.

There’s a fine line between examination and exploitation when it comes to this kind of subject matter, and THE SCARY OF SIXTY-FIRST has been and will no doubt continue to be divisive. Nekrasova is unapologetic in turning Epstein’s legacy into a full-on horrorshow, and the ultimate meanings of her dual plotline–that we as a public can’t get enough of cases like this even as they horrify us, and that the exploitation of young women didn’t and won’t end with Epstein offing himself–resonate in uncomfortable but inescapable ways. THE SCARY OF SIXTY-FIRST harks back in many respects to the horror and exploitation films of the ’70s and ’80s, which directly addressed then-current social issues and felt no need to be tactful about it.

That extends to the way it has been crafted as well. Nekrasova and cinematographer Hunter Zimny shot in 16mm, with a resulting visual rawness that complements the storytelling aesthetic. (It comes across even grittier in 35mm, which is how I caught it at a recent New York City showing. The movie becomes available on VOD today, though more 35mm screenings will be occurring in other cities, and should be sought out; go here for details.) Fans of low-cost shockfests from past decades will find themselves in pleasingly nostalgic territory from the opening scenes, with the audio bearing that slightly echoey, recorded-on-location sound of those older indies. The audaciousness of Nekrasova’s approach is complemented by the guerrilla feel of some of her on-the-street scenes: When the delirious Addie gets herself off right at the door of Epstein’s former townhouse late one night, the moment carries an extra charge because you just know Nekrasova and co. shot it without permission.

At the same time, Nekrasova and Zimny employ lush colored lighting redolent of vintage gialli, a veneer significantly furthered by Eli Keszler’s Goblin-esque score. Throughout, THE SCARY OF SIXTY-FIRST utilizes genre traditions (including a visit to a “magical apothecary” whose proprietor provides a crystal for protection) as it confronts a very real-life horror. While your response may vary, there’s no denying the force of Nekrasova’s filmmaking or the legitimacy of the messages she seeks to convey.