All the talk of timelines and history in the new SCREAM brings to mind a sobering thought: Wes Craven’s original is now almost as old as John Carpenter’s HALLOWEEN was when the first SCREAM came out. That film helped to permanently jumpstart the horror genre back in 1996, with a hip, meta internal awareness of HALLOWEEN and the many slashers it spawned. Today, a little more than 25 years later, meta is the default setting for franchise reboots, or as Mindy (Jasmin Savoy Brown), the new SCREAM’s resident genre expert, puts it, “requels.” You can’t satisfy the audience, she insists, without bringing back key faces from the original installments, as witness everything from Jamie Lee Curtis’ return in 2018’s HALLOWEEN to the current blockbuster success of SPIDER-MAN: NO WAY HOME.

This SCREAM makes sport of this trend even while indulging it, bringing back Neve Campbell, Courteney Cox and David Arquette to support the cast of engaging young newcomers. Yet screenwriters James Vanderbilt and Guy Busick make their return more than a gimmick; there’s an actual depth of feeling to Sidney Prescott, Gale Weathers and Dewey Riley reuniting to face a new threat to their hometown (and, in Gale and Dewey’s case, dealing with the dissolution of their marriage). Their presence provides the unexpected dramatic spine to SCREAM, which is otherwise concerned with the franchise’s traditional formula of brutal murders, guess-the-killer mystery and in-references to past fright films. 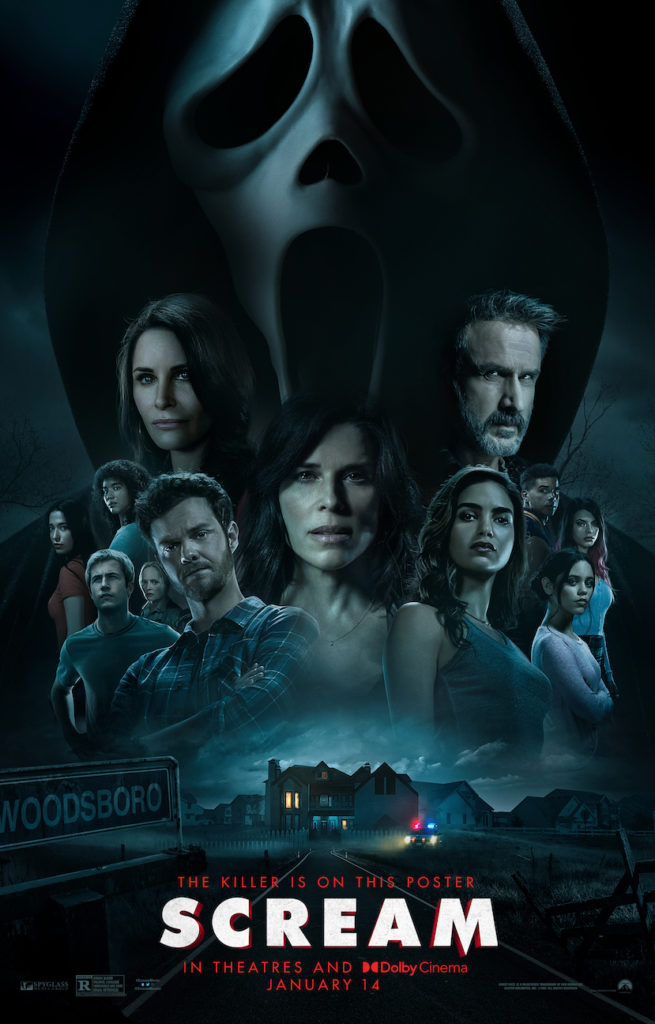 There’s one facet here that may or may not be something of an in-joke: After decades of unkillable murderers spawned by Michael Myers, SCREAM showcases a number of remarkably resilient victims. People are stabbed, shot and otherwise violently abused throughout the movie, then keep popping back up for more. Toughest of all is Tara (Jenna Ortega), the de rigueur opening-sequence target who is repeatedly hacked by Ghostface with the weapon-of-choice hunting knife, yet is next seen not in a coffin but sitting in a hospital bed, looking not too much the worse for wear. (In a later setpiece, the facility is so completely deserted that it can only be a homage to 1981’s HALLOWEEN II.)

During that lengthy opener, which gets SCREAM off to a properly tense and frightening start, Ghostface taunts Tara over the phone (Roger L. Jackson’s voice can still provoke shivers) about her scary-movie knowledge, and she asserts that she’s not much into slasher fare, preferring “elevated” horror like THE BABADOOK and HEREDITARY. That’s SCREAM winking at the fact that there are now divisions within the genre that provoke fan dissent, but Tara’s particular tastes are not the reason she’s attacked. That becomes clear when her older sister Sam (Melissa Barrera, a most appealing central presence) returns to Woodsboro, her boyfriend Richie (Jack Quaid) in tow, and we learn that Sam has a direct connection to the original slayings. So, it turns out, do a number of Tara’s friends, which potentially makes them all targets for the new murder rampage. Can they use their knowledge of their town’s history and horror movies to save their skins–and is there even anything to be learned from the increasingly terrible sequels to STAB, the movie-within-the-movie based on the initial Woodsboro killings?

As we see, STAB made it to double the number of series entries that SCREAM previously has, with STAB 8 featuring a killer wearing a gold ghost mask and wielding a flamethrower. The SCREAM movies never got that bad, though the third and fourth had a sense of running in place, and depending too much on the self-reflexive humor at the expense of genuine terror. SCREAM 2022 turns out to be the best in the series since SCREAM 2, with directors Matt Bettinelli-Olpin and Tyler Gillett bringing the same vigor that they did to their superior stalkarama READY OR NOT. They treat the movie as a serious shocker first and foremost, even as they amusingly play with the slasher form’s built-in expectations; characters open doors that block out part of the background, and Bettinelli-Olpin and Gillett tease our certainty that someone menacing will be standing there when the doors are closed. They also splatter more blood across the scenery than in any of the previous SCREAMs, though no one on screen thanks the HOSTEL/SAW trend that followed the first three and made the R rating safe for a lot more gore than was permissible before.

SCREAM succeeds in achieving that balance necessary for a “requel” to work: giving fans the familiar elements they want with enough of a new spin that it doesn’t feel like the same-old. It tweaks horror fans and their foibles without talking down to or insulting them; the “toxic” side of fandom is even addressed, though not for any longer than it takes one long stretch of explanatory dialogue to be delivered. Under the circumstances, it may be a SPOILER to note that SCREAM doesn’t end with a post-credits stinger or any other explicit suggestion that another return to Woodsboro is in the works. If this is going to be the last SCREAM (and perhaps it should be), all involved have assured that the series is going out on a high note.