There are a couple of F-bombs dropped during the course of the GOODNIGHT MOMMY remake, and the viewer–particularly one who is familiar with the 2014 original–could be forgiven for suspecting that they’re there to win the movie an R rating. Certainly, the new movie would otherwise warrant no more than a PG-13, which would signal that it has been significantly watered down from its nerve-wracking predecessor.

Austrian filmmakers Veronika Franz and Severin Fiala’s GOODNIGHT MOMMY was and still is one of the most cruelly effective genre films of modern times, unblinking in its horrors and yet also powered by ambiguity. The English-language version, directed by Matt Sobel from a script by Kyle Warren, is more concrete about certain things while cautiously avoiding pushing the material in the same extreme directions. Even a key piece of costuming is less harsh: The movie opens with twin brothers Elias (Cameron Crovetti) and Lukas (Nicholas Crovetti) being dropped off at the remote but well-appointed home of their mother (Naomi Watts, notching her fourth redux of a foreign-language fright flick after DOWN/THE SHAFT, THE RING and FUNNY GAMES). She has recently had cosmetic surgery, and wears a face covering that’s sleeker and less, well, Frankensteinian than the patchwork of bandages worn by the mom in the original. 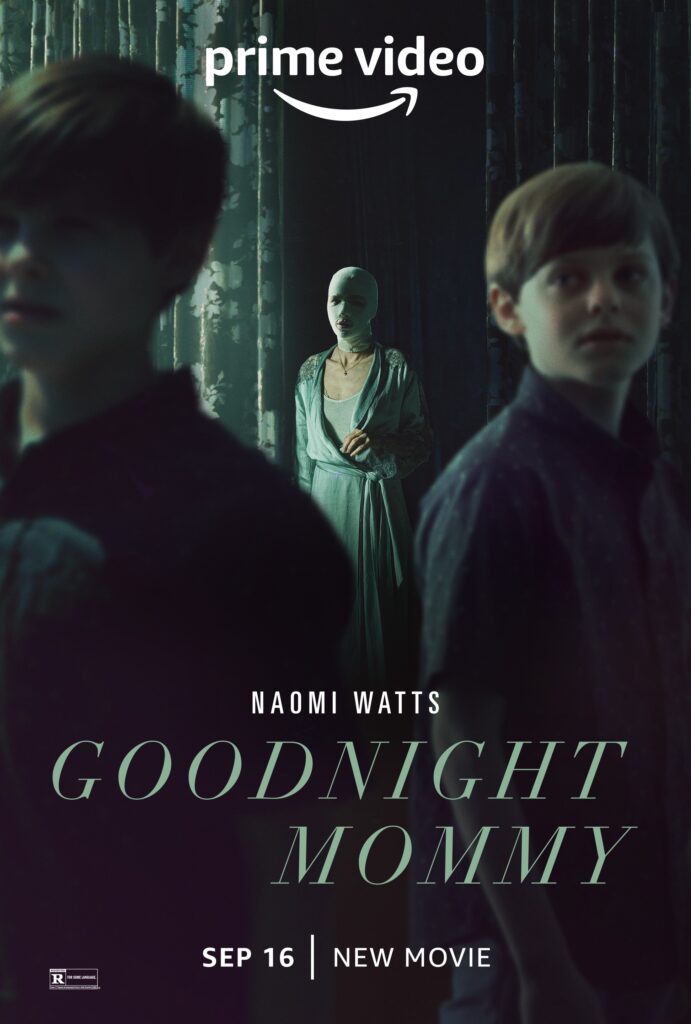 The story, for a little while at least, remains the same. Mother at first acts welcoming toward her sons, but her behavior soon becomes more distant, and then downright hostile. She’s not acting like the mom they remember, and the boys begin to suspect that behind that covering is an impostor. At first attempting to flee the house, Elias and Lukas are stymied and ultimately resort to tying the woman to a bed, hoping to force the truth out of her. In the ’14 film, their interrogation involves torture scenes that are almost unwatchably harrowing, but about the worst thing that happens to Mother (if it is indeed her) here is that she gets a bucket of ice water thrown on her.

Clearly, the filmmakers were attempting to approach the material from a different direction, to emphasize the psychological instead of the visceral and allow us more empathy for the three principals. It’s a fair ambition, and the central performances are good; Watts effectively develops an uncertainty about her character, while the Crovettis have a natural byplay and some nice moments together when the screws aren’t tightening. Yet they don’t tighten enough as GOODNIGHT MOMMY goes on; the sense of mounting danger that ran through its predecessor is missing here, and it feels like a lot less is at stake. Particularly because…

And here’s where the reviewer needs to be careful, since the discussion has to do with a story twist that throws the entire situation into new relief. Here, as in the first film, it can be guessed in advance by anyone paying close attention to the exchanges between the three leads (or anyone who’s seen a couple of past horror films on the same subject). The difference is that under Franz and Fiala, knowledge of that secret bestows an extra level of tragedy and tension to the increasingly ghastly events. Here, that impact is dissipated, in ways that have to do with the interplay between the twins, and Lukas’ influence on Elias’ actions. The sense of the boys feeding off each other’s paranoia is gone, and there’s not much there to replace it (apart from a couple of gratuitous nightmare scenes in which Elias sees Mother as a literal monster); evidently the idea was to suggest the possibility of a hopeful resolution, but at times it feels like the movie’s last third was written by someone who hadn’t seen the first hour.

GOODNIGHT MOMMY 2022 doesn’t dishonor its forebear; its creators were clearly well-intentioned and not simply attempting to knock off a well-received property. But the overall approach to the subject matter feels tentative rather than committed, and the end result falls into the paradox that has claimed many a remake: It’s different enough that it misses what made the original work, but not so distinctive that there’s any reason to see it when the earlier film is still available.