Movie Review: The new “CANDYMAN” has enough to hook you

Bernard Rose’s CANDYMAN (1992) offered a lot to live up to. The best-ever cinematic adaptation of Clive Barker’s prose (yep, I said it), it fully delivered the scares, a deeply developed mythology, unforced social commentary and both a villain and heroine worthy of the horror pantheon. It was a tough act to follow, with 1995’s CANDYMAN: FAREWELL TO THE FLESH taking the story in unfortunate new directions and 1999’s CANDYMAN: DAY OF THE DEAD reducing its majestic phantom to direct-to-video franchise fodder. It is both understandable that no one has tried to revive the character since the 1990s and appropriate that he would be brought back now, given the events of the last few years.

What writer/director Nia DaCosta and writer/producers Jordan Peele and Win Rosenfeld have crafted is both a direct sequel and a reinvention–a fresh take on the legend that ties in multiple, and meaningful, ways to its predecessor. CANDYMAN 2021 is easily the most ambitious classic-slasher revival of the 21st-century trend, expanding on the first film’s themes of racial inequity and injustice, though its aspirations sometimes exceed its grasp. Never less than intriguing and often attention-grabbing, it’s also uneven and a little messy in its development. 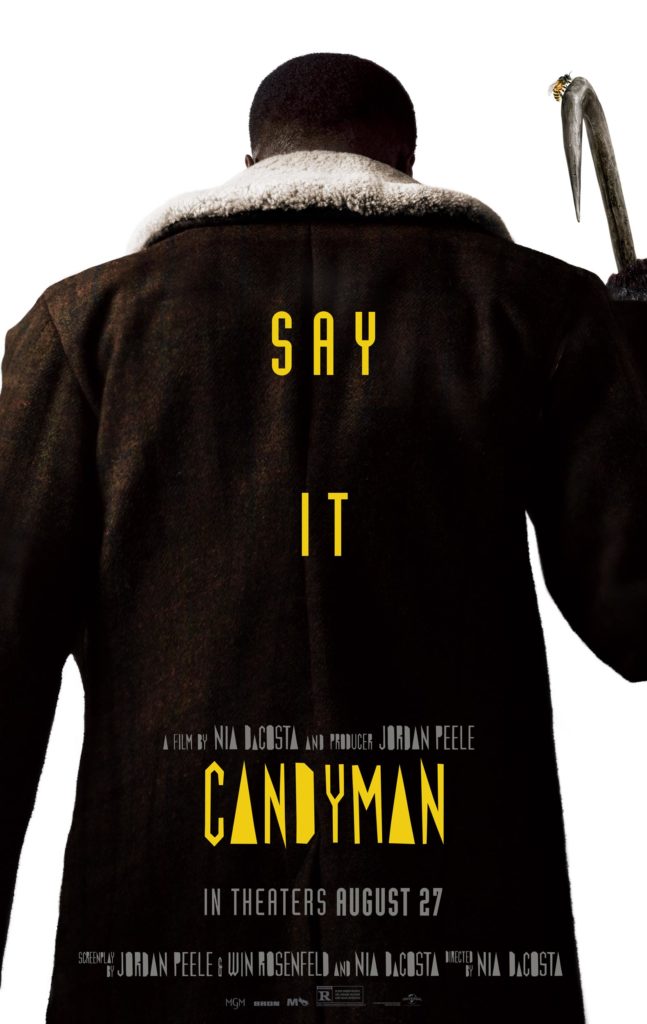 One of this CANDYMAN’s most successful gambits is its expansion on the nature of its titular specter. Rose, adapting Barker’s short story “The Forbidden,” presented the tragedy of Daniel Robitaille, a 19th-century African-American painter murdered by a lynch mob for having an affair with a white woman. The new film posits Robitaille as just one victim of racial hatred collectively haunting the Cabrini Green housing projects–which, in the movie’s present of 2019, have been practically gentrified out of existence. The decrepit stretch of buildings that remain are visited by the film’s protagonist, artist Anthony McCoy (Yahya Abdul-Mateen II), in search of inspiration. The spark that leads him there flips the script on Rose’s story, in which white Helen Lyle (Virginia Madsen) investigates by the Candyman mythos; here, African-American Anthony is first intrigued by the legend of Helen, who is still considered responsible for the killings committed by Candyman three decades before.

Surprisingly, not much is made of the fact that both Robitaille and Anthony are painters. This Candyman’s key antecedent is Sherman Fields (Michael Hargrove), who already had a hook for a hand when he was killed in the ’70s by police who mistakenly believed he had put razors in Halloween candy. Anthony becomes fascinated and eventually obsessed by the legend, which brings a new macabre creativity to his work but dismays his girlfriend, art gallery director Brianna (Teyonah Parris). The Candyman fixation comes to take over Anthony physically as well, even as the ghost himself, resurrected by Anthony’s attention, begins to rack up a body count. The first big death setpiece, set in the gallery, is powerfully staged by DaCosta with giallo-esque colored lighting and shocking bursts of blood. As the film goes on, though, it misses Tony Todd’s grandiose, imposing presence from the original. This Candyman is mostly presented in an oblique manner; he’s a metaphor as much as a monster, which is thematically of a piece with DaCosta and co.’s overall approach but limits his impact as a figure of fear.

The filmmakers do successfully establish Candyman as a representative of the anger that’s been boiling over in many cities for some time now. Pointedly, one of Anthony’s creations is a mirrored installment called “Say My Name,” which on the surface references the method by which Candyman is summoned but also points to the tributes to recent victims of law-enforcement violence. At the same time, CANDYMAN 2021 further reinforces its connections to the ’92 film as it continues, with brief, welcome returns of a familiar face and a familiar voice, a strong scene featuring one of the previous supporting players (who barely appears to have aged) and shout-outs to both Barker and producer Steve Golin.

Yet in attempting to encompass so many themes and ideas, this movie doesn’t quite achieve the taut, relentless focus and drive of its progenitor. Several moments attempt satire of art-scene pretensions that aren’t all that meaningful and distract from the core narrative, and glimpses of Brianna’s backstory aren’t sufficiently fleshed out. The film runs a fairly short 91 minutes, with a sense of potentially missing material, particularly when it shortcuts its way to its climax. And one of the key horror scenes–the massacre of a group of prep-school girls–while imaginatively filmed, feels disconnected from the rest of the movie, to the point of suggesting a tribute sequence from a Ryan Murphy series.

CANDYMAN is at its best when it’s exploring the brutal, tragic heart of its mythology, transporting the material into modern times. DaCosta, jumping into the big leagues after her much-praised indie debut LITTLE WOODS, demonstrates a strong stylistic eye, making expressive use of shadow puppetry to convey several pieces of backstory, and gets solid work from her cast, also including Colman Domingo in a vivid turn as a Cabrini Green resident with direct ties to Candyman’s past. Cinematographer John Guleserian, who usually specializes in comedies and romances (including another reboot debuting today, HE’S ALL THAT), takes to horror with a keen sense of foreboding atmosphere, and Cara Brower’s production design effectively integrates odd, off-kilter interior architecture. Robert Aiki Aubrey Lowe contributes an edgy, tingly score–one that nonetheless won’t entirely make you forget Philip Glass’ marvelous music for the first movie.