Movie Review: The horrors of “ANTLERS” will stick with you

Although ANTLERS is more somber and less fantastical than the films producer Guillermo del Toro has directed, it’s easy to see what drew the creator of CRONOS, THE DEVIL’S BACKBONE and PAN’S LABYRINTH to this project. An adaptation of Nick Antosca’s genuinely frightening short story “The Quiet Boy,” it’s an examination of childhood innocence dying in the face of grown-up corruption and malefic supernatural influence. ANTLERS is a few other things, too, and has more on its mind than many horror films, while also delivering the shocks and especially the atmosphere.

Set in rural Oregon, ANTLERS takes us to the small town of Cispus Falls, which might once have been thriving, before the mine that was evidently its primary business closed down. In the opening scene, Frank Weaver (Scott Haze) and a buddy are taking advantage of an empty tunnel to cook up meth when something emerges from deeper underground–something that for now is unseen, but eerily heralded by growls and glowing embers. Three weeks later, local schoolteacher Julia Meadows (Keri Russell) becomes concerned over the odd behavior of Frank’s 12-year-old son Lucas (Jeremy T. Thomas), particularly a horrific story he tells in class. She doesn’t know it at first, but she’ll eventually learn that it’s a reflection of the dire situation going on back at the Weaver house, involving a triple-locked door and an unhealthy appetite. 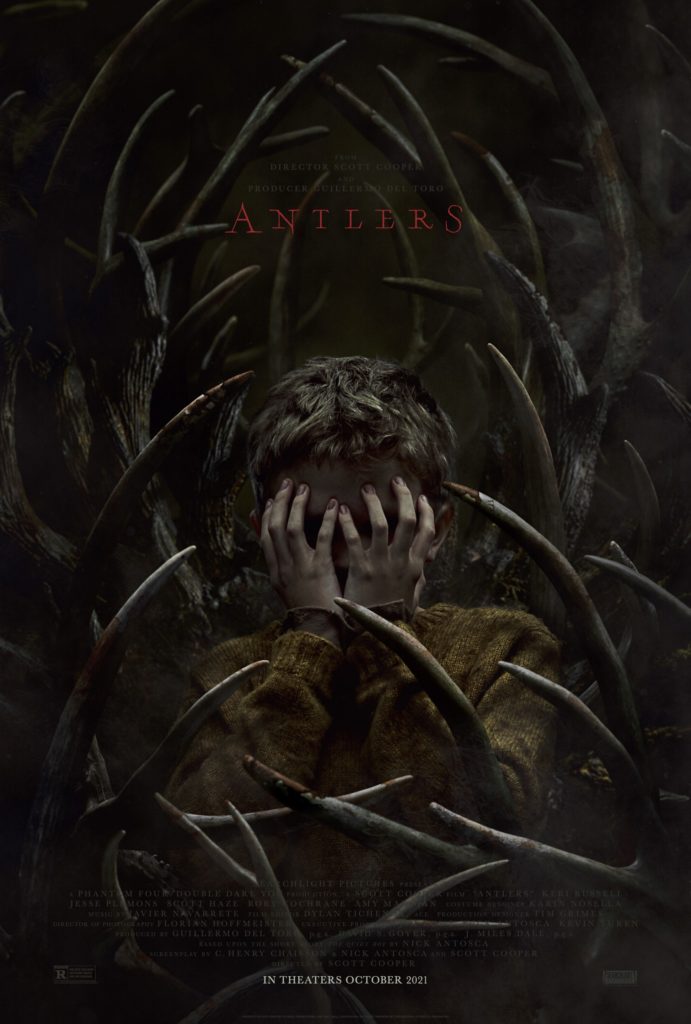 There isn’t a lot of mystery to the screenplay written by Antosca, C. Henry Chaisson and director Scott Cooper; the audience is pretty much ahead of the characters when it comes to what’s going on at the Weaver place and the surrounding forest. Cooper and his co-scripters are more interested in studying the environment in which their people dwell, and how the more prosaic horrors of their lives and their pasts are exacerbated by the supernatural type that invades their town. And vice versa; from its opening title screen, ANTLERS suggests that the monstrousness has arisen as a result of humanity’s tampering with the natural order.

Cooper makes this point without overstatement, letting just a few choice images get the message across, and that’s reflective of his suggestive approach throughout. Julia has recently returned to her childhood home, moving back in with her brother Paul (Jesse Plemons), who has become the local sheriff because…well, no one else in their depleted town wanted the job. They’ve both got severe issues tied to past abuse, which informs Julia’s interactions with Lucas, and here again, Cooper plays this material out with unforced naturalism. Julia is also a recovering alcoholic, and her battle with the bottle isn’t belabored; all we need to see is her reaction to the booze behind the counter as she buys groceries. And the breadth of the selection is enough to suggest that she’s far from the only one in town drowning her troubles in drink.

Rife with subtext, ANTLERS is also rich with mood. Cinematographer Florian Hoffmeister and production designer Tim Grimes, working on Canadian locations, evoke a sense of desolation and broken spirits in Cispus Falls, with gloom, fog and darkness only occasionally broken by fire and police lights. Composer Javier Navarrete (PAN’S LABYRINTH) accentuates the quietly striking visuals with an ominous, evocative score. When the foreboding veneer gives way to full-blown horror, sporadically during the first hour and then heavy during the final act, it’s one area in which Cooper doesn’t hold back. We get good looks at the deformation, carnage and an antlered monster, with excellent makeup effects by Toby Lindala and creature creations by Legacy Effects and Shane Mahan that elicit genuine frights.

Cooper, who guided Jeff Bridges to an Oscar in his first feature CRAZY HEART, continues to demonstrate his skill with actors here. This is Russell’s most haunted role yet in both senses of the word, and she beings nuance and shadings that suggest all kinds of unspoken backstory and present-day conflict. She’s well-complemented by Plemons, underplaying what could have been the showier role of a man with equivalent past demons who’s in over his head as the local authority figure, even before the monster arises. Young Thomas, making his feature debut after TV work including Amazon’s LORE, is instantly sympathetic as a boy forced by terrible circumstances to grow up way too fast. It is a shame, though, that the great Native American actor Graham Greene doesn’t have more to do than sit down for a few minutes to deliver the necessary exposition about the Wendigo. The occult explanation is a prerequisite of a film like ANTLERS, but it’s the placement of these elements in such well-wrought, identifiable and difficult human situations that makes Cooper and co.’s movie stand out.