THE PURGE: ELECTION YEAR was the title of the 2016-released third in this franchise, but it really belongs on the fifth entry that hit theaters today. It was originally supposed to open last year, in the midst of the reckoning over the legacy of Donald Trump’s leadership and anxiety over whether he’d get four more years; today, its plot remains relevant in light of the events of January 6, when Trump followers took it upon themselves to attempt an extension of his time in office by the most violent means possible. The hook of THE FOREVER PURGE is that the Purgers are taking advantage of the night when all crime is legal to enforce their “purification” of the U.S., and have no intention of stopping when the 12 hours are up.

If only THE FOREVER PURGE really dug into its subject to come up with something beyond the usual talking points and by-now familiar action beats. The movie skips along the surface of the issues and misses a few chances it sets up for itself to deliver something dramatically and/or sociopolitically stimulating. And while it features POC leads as its objects of identification, the characters are largely colorless. 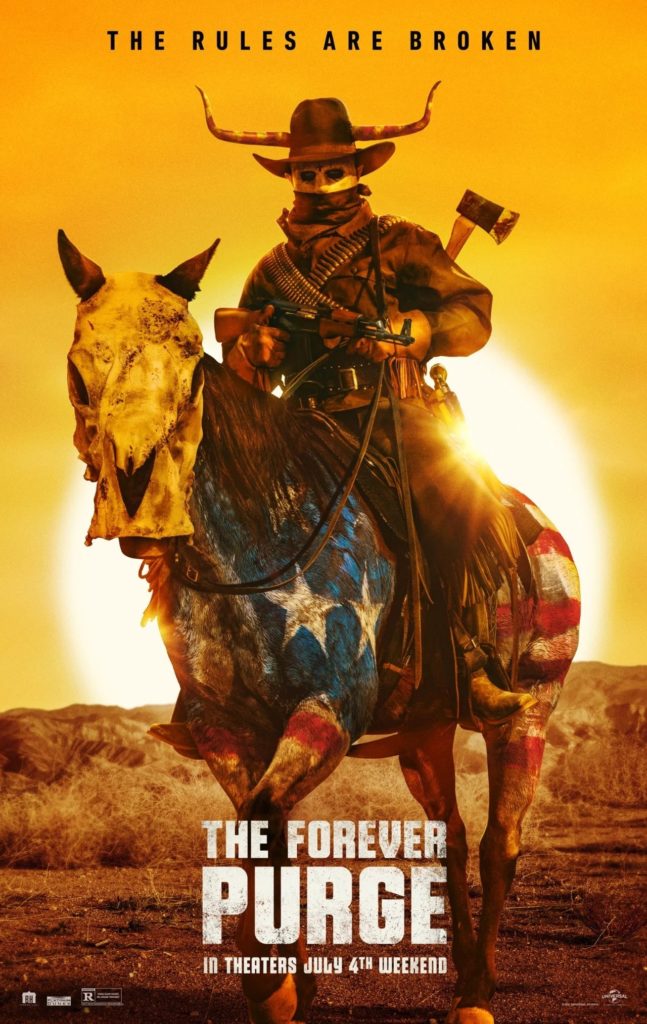 As the film opens, the New Founding Fathers of America, after some time out of office, have been voted back in and reinstated the Purge, and the residents of Los Feliz, Texas are preparing for the violent night. Our central couple are Adela (Ana de la Reguera) and Juan (Tenoch Huerta), recently immigrated from Mexico; she works at meatpacking plant and he’s a cowboy on a ranch, where he gets a visual intro right out of a spaghetti Western and demonstrates an ability to tame the wildest horse. There’s tension between Juan and Dylan (Josh Lucas), the prejudiced son of ranch owner Caleb Tucker (Will Patton), who’s more gracious toward his workers, even giving them “Purge protection bonuses” as that night is about to fall. The Tuckers retreat behind the steel doors that protect their estate and Juan and Adela manage to find safe haven as well, though sightings of marauding bands of “The Real Patriots of America” make it clear that other local Mexicans aren’t so lucky.

Once the Purge ends, the real trouble begins. Those who want to cleanse America of “the unwanted” have enjoyed the opportunity to put their murderous bigotry into practice and declare this to be “The Ever After Purge,” which won’t end until the country has been “disinfected.” Juan, Adela, Dylan, the latter’s pregnant wife Cassie (Cassidy Freeman) and a few friends and family are forced to go on the run, putting their differences aside to survive in a landscape immersed in hatred. After they’ve run through several brutal encounters, a possibility for permanent escape arises, via one of the cleverer twists in franchise creator James DeMonaco’s screenplay.

Too much of the script, though, is comprised of on-the-nose, functional dialogue, with the characters often stating the obvious (“Holy shit, they’re shooting at us!”) and occasionally discussing the issues behind their situation in simplistic ways. There is one good speech delivered at about the half-hour mark by the movie’s most interesting character, but he’s soon out of the picture. So is the villain that speech is directed toward, who’s a switch on the xenophobes rampaging around him, and could have been a compelling threat if allowed to continue to pursue our heroes. Instead, there isn’t a consistent baddie for the protagonists or the audience to fear until the last act, and he’s not nearly as interesting as the other guy. Moreover, the tantalizing possibility that the NFFA intended and encouraged the “Ever After Purge” to take place (cf. January 6) is never raised or explored.

DeMonaco ceded the director’s chair this time to Everardo Valerio Gout, who captures (with cinematographer Luis David Sansans) tangible Southwestern atmosphere and keeps things moving. Unfortunately, too much of the action is choppy, shaky and dark in ways that make it hard to focus on what’s happening. Things improve somewhat when the fleeing band make it to El Paso, with a persuasive city-under-attack vibe conveyed via long tracking shots. Then we get to the finale, and it plays out like the finales of dozens of other Southwest-set actioners, before a final scene intended to make you seriously contemplate the future of our country. But given the lack of nuance in THE FOREVER PURGE’s treatment of its subject and depth in its people, all I could think about as it came to a close was how much better similar material was done with a Spanish inflection in last year’s undercelebrated Brazilian thriller BACURAU.