Movie Review: The comedic horror of “STUDIO 666” is out of tune

The idea of a band stranded in a house of fright dates back all the way to a 1940 RKO horror/comedy called YOU’LL FIND OUT (and perhaps earlier than that). The styles of music may change but the plot basics remain the same, and so it is with STUDIO 666, in which the Foo Fighters play themselves and encounter demonic shenanigans while trying to record an album. The scenario isn’t really much more advanced than in a similarly themed episode of JOSIE AND THE PUSSYCATS or some such ’60s cartoon, and the film has more to offer Foo fanatics than it does to horror hounds, a few seriously splattery setpieces notwithstanding.

STUDIO 666 was shot in the same Encino, CA mansion where the group actually recorded last year’s MEDICINE AT MIDNIGHT, and the movie feels like a hang with the gang before the scary stuff starts. The Foos are under pressure from their loudmouth manager Jeremy Shill (Jeff Garlin) to deliver their next album, and he and realtor Barb (Leslie Grossman) conspire to set them up in that house, which is covered with vines and dead leaves when they arrive. Dave Grohl (himself) also spots a mysterious shears-toting figure skulking around the premises, and sound engineer Krug (Kerry King, late of Slayer) suffers a fatal “accident,” but the band presses on nonetheless. Then Dave, who’s been blocked creatively, finds an old reel-to-reel containing tracks by an outfit called Dream Widow, who were murdered there two decades ago, and there’s a book of incantations by Aleister Crowley lying around, and… 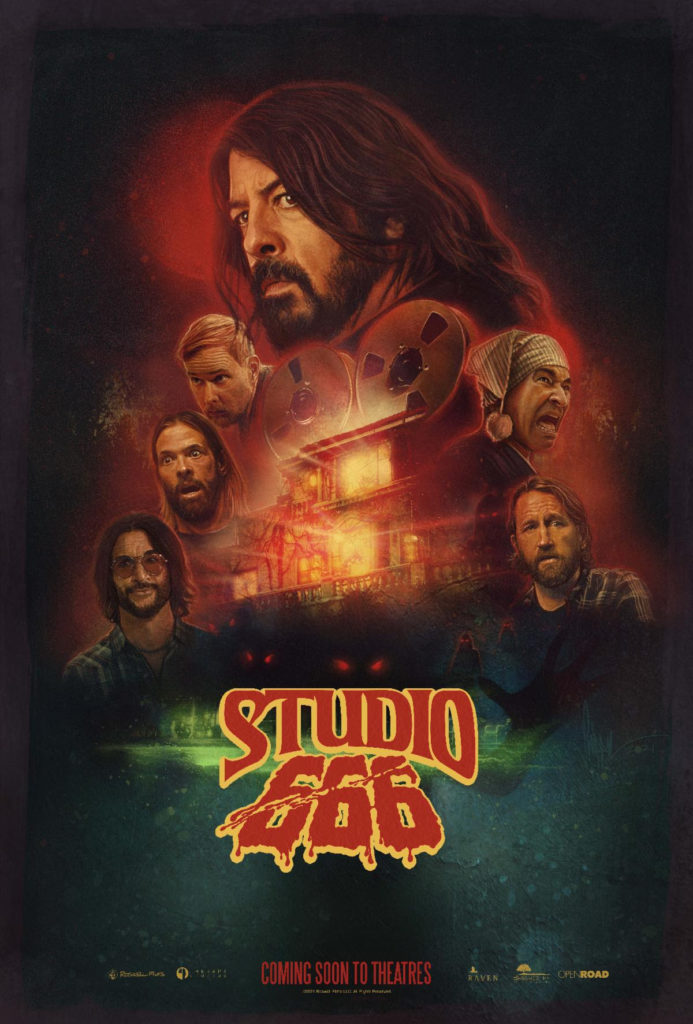 And the story pretty much writes itself from there. Despite the presence of seasoned scare scribe Jeff Buhler (THE MIDNIGHT MEAT TRAIN, PET SEMATARY) as co-scripter with Rebecca Hughes, STUDIO 666 is never as inventive or clever as one hopes it will be, given the setup and possibilities. It’s clearly intended as a genre homage, from the “Carpenter font” in the opening credits (backed by a theme from John Carpenter himself with John Cody Carpenter and Daniel Davies) to both a plot and individual scenes (like a light bulb filling with blood) that echo THE EVIL DEAD. There are no new ingredients added to the stew, though, nor is much opportunity taken to deliver more than surface-level satire of the music biz.

A further disappointment is that aside from Grohl as he plays out an obsession/possession arc that turns him murderous, the Foos are given little to do for the bulk of the film but provide reactions and profane outbursts. Obviously allowances had to be made that the guys aren’t actors, but surely they all have real-life personalities and quirks that could have been mined for more entertainment while waiting for the scary stuff to truly kick in. Not to mention that that takes a while. Part of the story hinges on Dave insisting the Foos keep working on a demonic heavy-metal tune that becomes distended past the 40-minute mark, and STUDIO 666 follows suit; there’s really no reason for this movie to be 106 minutes long.

Once Dave fully descends into weapon-wielding mania and his bandmates finally get to be proactive and try to stop him, STUDIO 666 gets a jolt of energy as the blood starts seriously flying. Musical instruments are put to unintended homicidal use, and there’s a chainsaw tableau rivaling anything in the latest MASSACRE reboot. (Too bad that this and other highlights are given away in the red-band trailer–and that Tony Gardner and Alterian, Inc.’s first-rate prosthetic work is occasionally “enhanced” with cheesy CGI.) Longtime Steadicam operator and music video director BJ McDonnell, helming his second feature after HATCHET III, shoots it all with gusto, and employs a mobile camera and some imaginative lighting throughout, but for the most part, the material just isn’t there to support him.

That might not be an issue for Foo Fighters devotees, who will simply enjoy seeing the guys get their first feature-length showcase, and watching them get horribly slaughtered at their frontman’s hands. Others may wish that STUDIO 666 had the true wit of something like the demonic-rock subplot of the underappreciated EXTRA ORDINARY, featuring Will Forte, who also has a small role here. Others in the secondary cast include Whitney Cummings as a neighbor who’s handy for the required, and generic, exposition about the house’s past, and Jenna Ortega as a Dream Widower who’s brutally offed in a prologue–which gives STUDIO 666 an unintended callback to the latest SCREAM as well.