TERRIFIER 2 is one movie you could accuse of wretched excess, and writer/director Damien Leone would probably take it as a compliment. Having scored a substantial cult following for the previous TERRIFIER and its villain, the savage and silent Art the Clown, he has not only packed its sequel with even more excessive gore, but gone crazy with the running time, which clocks in around two hours and 20 minutes. (Longest slasher film ever? More research may be required…) Part one told a tight little story with limited narrative scope and characters; TERRIFIER 2 significantly if not always coherently expands Art’s mythology, has a larger cast of characters/victims, and ends two or three times. Yet it’s all held together by the frightful funnyman at its center; some scenes may run overly long, but Art never wears out his welcome.

With this film, Art bids to become a franchise monster à la Jason or Freddy, though his closest screen antecedent is the similarly pantomimed Satan Man from Jeff Lieberman’s SATAN’S LITTLE HELPER. Like that movie, both TERRIFIERs are set around Halloween, and as TERRIFIER 2 opens, it’s the one-year anniversary of the “Miles County Massacre,” which isn’t stopping the local youths from planning to celebrate All Hallows’ Eve (the title of Art’s first vehicle) in various ways. Chief among them is Sienna (Lauren LaVera), an artistically inclined teenager creating a warrior angel costume designed by her late father. Dad evidently had passions for both drawing and the dark side, the latter of which has been passed down to Sienna’s tween brother Jonathan (Elliott Fullam), who’s a little too obsessed with serial killers and similar subjects for their mother’s (Sarah Voigt) taste. 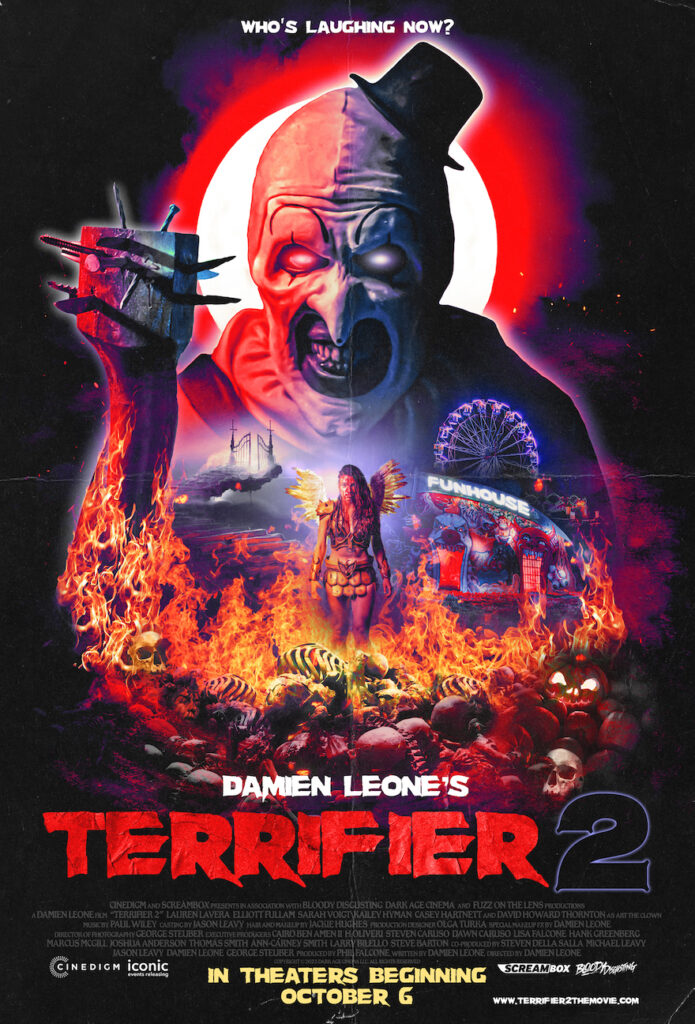 It is Jonathan who first becomes aware that Art (David Howard Thornton) is stalking their neighborhood, though the killer clown first takes part in a delightfully demented little setpiece in which he does something I’ve never seen a bloody slasher character do in a movie before. This sequence also introduces his sidekick of sorts, a creepily made-up little girl (Amelie McLain), who’s apparently the ghost of one of Art’s past victims. I say “apparently” because the exact nature of this young ghoul is never properly established; it’s suggested at first that she’s just in Art’s mind, while later Sienna and Jonathan (but only they) are able to see her, and Jonathan physically interacts with her. There are also hints at a meaningful connection between Art and Sienna and Jonathan’s deceased dad, and while these don’t lead to the most obvious or predictable revelation, they’re never really resolved or explained either.

TERRIFIER 2 works best as an exercise in macabre style; Leone repeatedly demonstrates that he knows his way around a creepy scene, with moody and colorful cinematography by George Steuber and an appropriate, John Carpenter-esque synth-and-piano score by Paul Wiley, plus fine use of locations, especially at the lengthy climax. It’s also a strong showcase for Thornton, who gets more to do here than in the previous film, and makes the most of it. By turns menacing, evilly playful and mocking, he uses expressions and body language to make Art a fully realized and wickedly entertaining presence. He can be very funny one minute (trying on silly glasses in a Halloween store) and brutally scary the next (watch out for his meat cleaver, Halloween-store worker!) without ever seeming to break character. As his principal stalking target who ultimately becomes his opponent, LaVera confirms her bona fides as a final girl from beginning to end.

Oh yes, and the movie is also a serious gorefest. Leone, serving as his own makeup effects creator, takes bodily/cranial/etc. damage to the nth degree, never settling for one blood-spurting atrocity visited upon a victim when several can do, usually while they’re still alive and suffering. The latter can make some of the death scenes pretty unpleasant if one maintains any kind of sympathy for the characters, though the fact that they can stay conscious for so long after so much severe injury has been visited upon them turns these butchery tableaux into something resembling absurdist theater. TERRIFIER 2 is largely played straight, but it probably works best if you don’t take it entirely seriously.