Movie Review: “SPIRAL: FROM THE BOOK OF SAW” only partially rewrites the formula

The notion of one of the screen and standup stage’s most outspoken comedians and the cinema’s baddest motherfucker shaking up the SAW series seemed like just the jolt the franchise needed when SPIRAL: FROM THE BOOK OF SAW was first announced. And yet it’s the old hand–director Darren Lynn Bousman, who helmed the second through fourth SAWs–who brings more to the table than the new blood.

That’s no fault of Samuel L. Jackson, who in his very first scene immediately elevates both his dialogue and the movie in general. But his appearances are sparse enough for his role to feel like an extended cameo, even as the shadow of his character, venerated police captain Marcus Banks, looms large over the life of his detective son Ezekiel, or Zeke, played by Chris Rock. It was Rock who came up with the idea of this reboot and apparently had an uncredited hand in the writing as well, and Zeke is directly attuned to his confrontational comedic persona. Only here, that attitude has curdled into anger and cynicism, due to Zeke’s alienation from his fellow cops after reporting the transgressions of a dirty brother in blue. That was nine years ago and his colleagues are still leaving dead rats on his desk, and he has to protest to take the lead in a murder case whose specifics echo the torturous spree of the notorious Jigsaw. 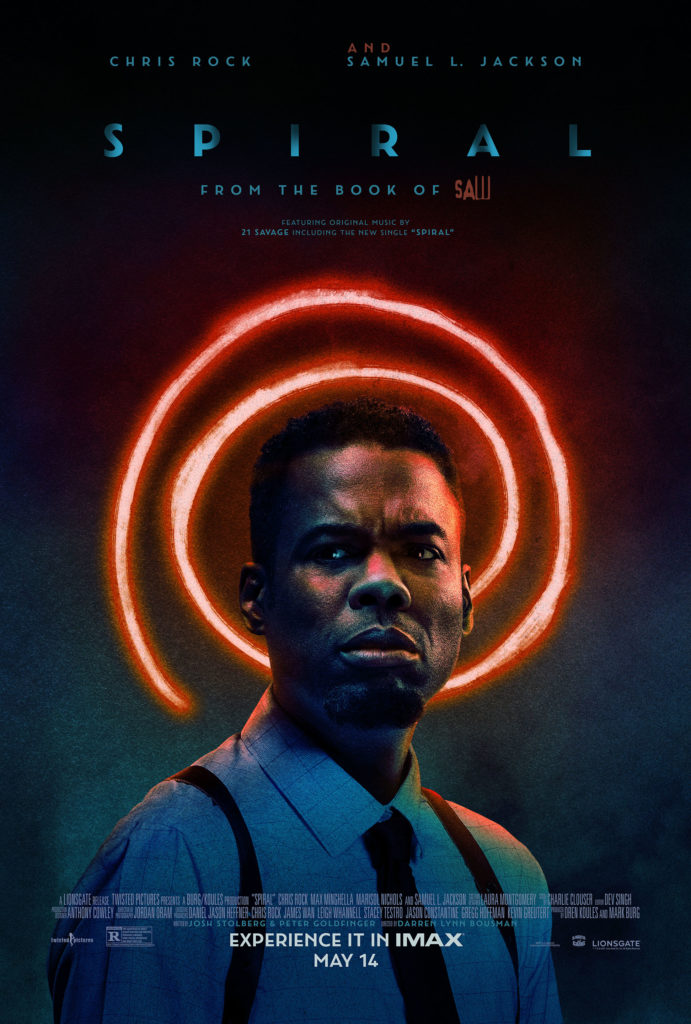 The first, subway-set killing gets SPIRAL off to a nicely nasty start, and establishes this relaunch’s particular morality. Rather than flawed people being forced to see the errors of their ways, the victims here are law enforcement officers being punished for violating their pledge to serve and protect. Like Jigsaw going after the HMOs in SAW VI, this takes some of the curse off the extended torturousness of their demises, though SPIRAL doesn’t fully engage the timely possibilities of its corrupt-cop scenario, especially given the African-American force behind its conception. There’s even a scene in which Zeke engages in a bit of torture of his own to get information out of a suspect, which goes uncommented on by either the other characters or the movie.

Rock seems fully committed and enthusiastic about playing in the SAW franchise’s bloody sandbox, yet as the going gets ever more intense and serious, his performance never quite shakes the feeling of a comedian stepping out of his comfort zone. His outset goal of bringing humor to SAW–certainly a welcome idea for this contemporary-grimdark series–amounts mostly to Zeke occasionally dropping standup-esque riffs, on oddly passé subjects. He’s first seen delivering a routine about FORREST GUMP that does have a pretty funny punchline, later jokes about TWILIGHT and, when the subject of a meth lab comes up, references THE WIRE rather than BREAKING BAD. The name-drops almost feel like attempts to date the story in the franchise’s heyday of the mid-2000s, though smartphones and other details dispel that possibility.

The plot Rock and the screenwriters have come up with is pretty beholden to the earlier part of this century as well. More than the previous SAWs, SPIRAL is a procedural indebted to SE7EN, the progenitor of this whole moralistic-murderer genre. At its center, Zeke ticks off all the typical boxes of a renegade cop with a broken marriage being saddled with a new partner he doesn’t want etc. Said partner, detective-in-training William Schenk (Max Minghella), provides a sounding board for Zeke’s cynical attitude and a bit more of an audience in to the world of terror and traps that Ezekiel becomes plunged into.

In his return to the saga he had a key role in building, Bousman adapts well to the handheld cop-drama milieu and brings his dependable intensity to the torture-and-kill setpieces, which are awash with grotesquely convincing blood and rended flesh courtesy of SAW stalwart Francois Dagenais. They’re scarier than they’ve been in the last few films and, nasty as they are, manage to avoid tipping over the line into lip-smacking sadism that particularly marred SAW 3D. Bousman and editor Dev Singh maintain a swift pace that carries you over the familiarity and plausibility bumps in this road to hell, and cinematographer Jordan Oram and production designer Anthony Cowley, a newcomer and relative newcomer to this world (though Cowley did Emmy-nominated work on the thematically similar DEXTER) provide visual continuity with past entries and plenty of immersive grottiness.

In the end, SPIRAL offers not the reinvention fans might have hoped for but a jumpstart, one that recaptures some of the dreadful pleasures of the early SAWs without finding genuinely fresh directions. Perhaps the biggest disappointment lies in the Big Reveal; the first movie in particular had that climactic surprise that sent audiences out buzzing, but the twist here will be easily seen coming by anyone familiar with the rules of this genre. If THE BOOK OF SAW is intended to have more chapters–and the abrupt ending certainly suggests it is–this one provides a solid enough foundation that will hopefully be built upon in more imaginative ways.