Movie Review: “SMILE” and the audience screams with you

This is not the first review, nor will it likely be the last, to note the debt that SMILE owes to RINGU and IT FOLLOWS, with a few key visuals particularly recalling the latter. Yet writer/director Parker Finn, making his feature debut expanding his SXSW-lauded short LAURA HASN’T SLEPT, has synthesized his recognizable influences into a movie that gets some good creeps of its own going. It also manages the not inconsiderable feat of running close to two hours without feeling protracted; you do feel the length, but it keeps you engaged throughout.

That’s partially due to the committed lead performance by Sosia Bacon, playing Dr. Rose Cotter, who works in a New Jersey hospital’s emergency psychiatric unit and inevitably has some emotional baggage of her own that she’s never unpacked. More trauma enters her life after she attempts to interview Laura (Caitlin Stasey, who starred in Finn’s short), who seems to be undergoing paranoid delusions about something evil coming after her. That something manifests as both people she knows and strangers, bearing unnerving rictus grins, whom only she can see. When the curse claims Laura’s life right in front of Rose, the latter soon realizes the hard way that her patient was telling the truth, and she becomes the next to be haunted by figures, sometimes in the distance and sometimes in her face, some familiar and some not, all baring their teeth at her. 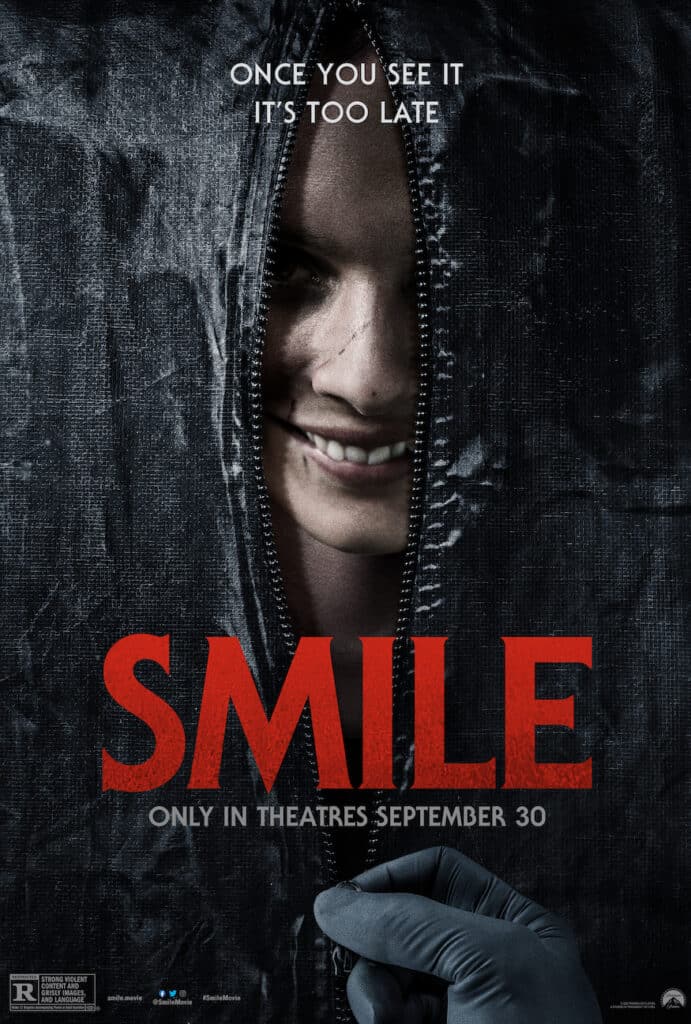 The plotting that follows will be familiar to anyone who’s taken in a decent share of 21st-century fright fare. Rose tries to track the history of the curse, from on-line research to visiting relatives of those afflicted, while facing a ticking clock before her own demise is assured. Along the way, she is doubted by everyone from family (her sister Holly, played by Gillian Zinser) to her fiancé Trevor (Jessie T. Usher) and even her psychiatrist (Robin Weigert); the only one who begins to believe her is her ex-boyfriend Joel, a police detective played by genre regular Kyle Gallner (THE HAUNTING IN CONNECTICUT, JENNIFER’S BODY, this year’s SCREAM). As her quest continues, we learn more about Rose’s troubled past, including one event that particularly scarred her and ties in directly with the horrors she’s presently facing.

Yet if the basics of SMILE are standard, Finn has filled in the details in intriguing and scary ways. The nature of the haunting he has created allows him to investigate trauma and its effects in ways that go beyond the typical supernatural chiller, and increase the psychological stakes for its heroine. He also demonstrates a knack for stylishly suggestive images, teaming with cinematographer Charlie Sarroff (RELIC) to turn Rose’s familiar spaces menacing and eerie. Amidst them, there are numerous jump scares, some of which play fairer than others, and while there are certain scenes where the punchlines can be seen coming, others don’t develop the way you expect them to and proceed into pretty disturbing territory. A few of Finn’s chilliest beats are those surefire moments when a phone call reveals that the situation Rose is in isn’t what she thinks, and the movie’s overall creepiness is enhanced by Cristobal Tapia de Veer’s shivery, atonal score.

The supporting cast (also including Kal Penn as Rose’s supervisor at the hospital) are all earnest and generally effective, with top honors going to Rob Morgan (Officer/Chief Powell on STRANGER THINGS), who makes the most of his single, intense confrontation with Rose, as a prisoner who has previously been through what she is experiencing. Several of them also got their evil smiles down to a T when their characters actually prove to be malevolent doppelgangers. The whole idea of turning the shivery contradiction of an evil smile into the foundation of a fright feature is such a good one that it’s surprising it hasn’t been done before, and the result will likely send horror fans out of the theater with smiles on their faces.