Movie Review: “SKINAMARINK” will make you a frightened child again

I was recently discussing the epic Indian adventure RRR with a friend, and observed that it was so extravagant, it didn’t feel like something that could have been filmed and assembled, but rather as if it had exploded full-blown out of its creator’s psyche. SKINAMARINK, which otherwise resembles RRR not one bit, created a similar sensation when I watched it. It’s not surprising that Kyle Edward Ball’s debut feature has become a hit on-line (following a flawed virtual festival berth that allowed it to be widely pirated), winning rapturous responses on Twitter and TikTok. It feels less like the product of any traditional filmmaking process than something that crept out of the dark recesses of the Internet after stealing the nightmares of its users.

Right from the start, SKINAMARINK (which begins a theatrical release this Friday the 13th; go to the official website to order tickets) takes you back to being a little kid lying in bed in the middle of the night, listening to strange noises coming from elsewhere in the house and wondering what their frightful sources might be. The whole movie has the tone of an elongated bad dream, and in its experimental approach, it goes beyond typical narrative features applying that kind of surrealistic logic. SKINAMARINK is so abstract and elliptical, it makes David Lynch look like Michael Bay, and potential viewers attracted by all the Internet praise should be advised that it does not provide the horror genre’s usual thrills and satisfactions. 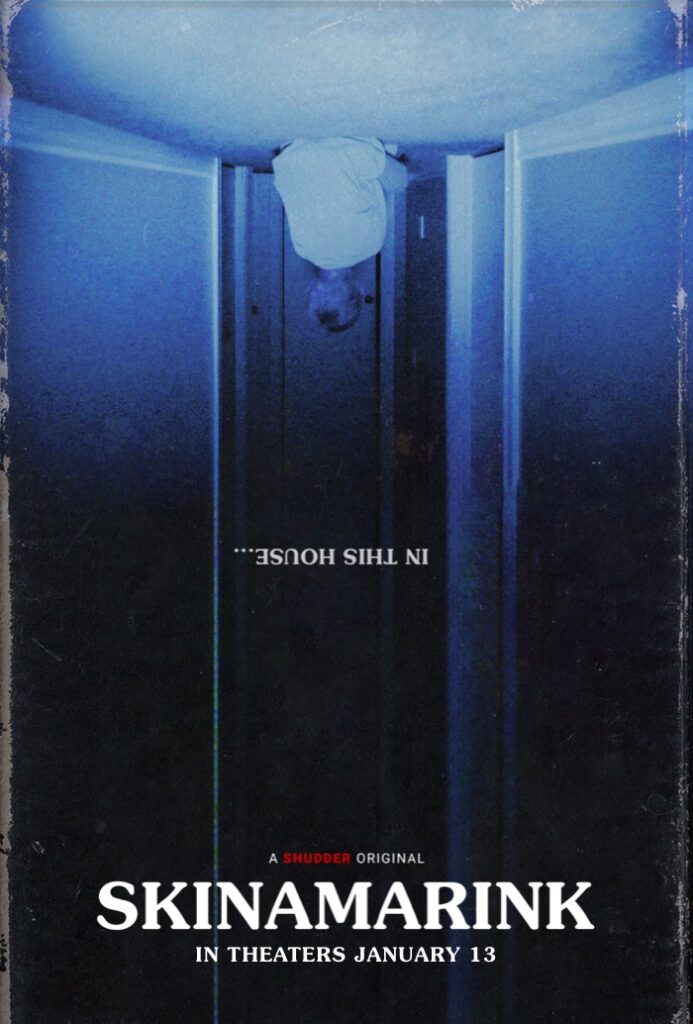 What it does offer is a 100-minute tribute to the power–and art–of suggestion. Its two protagonists, a couple of little kids, are barely seen, other than brief glimpses of their pajama’d legs (the publicity shot above shows more of them than you ever see in the movie). A couple of sequences are seen from one child’s point of view, but for the most part, the “focus” is almost always on what’s off-camera. The setting is a family’s house during a deep, dark night, and sometimes it’s hard to tell what we’re looking at until a light is switched on–usually over to the side, so the scene is still only half-lit. There’s a method to Ball’s opaque approach, and it is to hint at terrible things developing just out of the camera’s range, and let our minds tap into the aforementioned childhood terrors to fill in the rest.

It’s a gambit that works unerringly well, thanks to Ball’s skill with composition–alternating between the symmetrical and off-kilter–and a truly eerie sound design mixing strange background tones with nerve-jangling audio effects and sparse dialogue spoken by the kids and…someone else, which is occasionally distant or obscured enough to require subtitles. We learn very little about our preteen protagonists, other than little Kevin (Lucas Paul) having recently hurt himself in what might have been a sleepwalking incident, and it isn’t long before they’re alone in the house, up past their bedtimes, as that unseen presence begins speaking to them and undoubtedly doing a lot worse.

It eventually becomes evident that something supernatural is going on, as doors and windows start to appear and disappear, but who or what has invaded the house? Ball’s withholding of the details actually works to keep us involved with SKINAMARINK; we’re as uncertain as Kevin and Kaylee (Dali Rose Tetreault) are about what’s going on, which makes us fear for what might happen to them all the more. The filmmaker also turns youthful totems like Legos and vintage cartoons (well-selected for their macabre content) into harbingers of dark doings to come, with certain scenes lit, or partially lit, only by the unearthly flicker of the TV screen, and the only sound the music of those animated shorts that takes on a shivery, ominous quality.

The opening credits establish a ’70s aesthetic, from the widescreen image postproduced to look like slightly worn film to the occasionally crackly sound (only a brief note about COVID protocols breaks that illusion). Some have compared SKINAMARINK to found-footage horror, but Ball’s technique is more formalist than on-the-fly, and with the exception of the few POV shots noted above, he keeps the tension humming by not allowing us to see what his tiny protagonists might be seeing. This not-showing-or-telling was a risky gambit, but it pays off to the point where that offscreen voice’s simple request to “Look under the bed” has you tingling with anticipation, and a simple sound effect can get you shivering. While I always encourage the theatrical experience (especially when, in this case, the movie deserves the business after all the bootlegging), SKINAMARINK is one movie that might work even better watched on TV, late at night, with all the lights out.