Movie Reviews: Single parents vs. the supernatural in “MONSTROUS” and “THE ANCESTRAL”

MONSTROUS and THE ANCESTRAL, which both opened in limited theatrical runs on Friday (MONSTROUS is also on VOD), hail from opposite sides of the world, but have more than a few things in common. Both are about single parents who bring their child/children to a remote house, and are beset by paranormal phenomena. And each attempts a game-changer of a twist in its second half, in both cases raising more questions than they offer answers.

MONSTROUS does have the advantage of a fully invested Christina Ricci playing Laura Butler, who as the film opens packs up her young son Cody (Santino Barnard, who with his big eyes is well-matched with Ricci) and drives to their new home. Her car, dress and “See You Later Alligator” on the soundtrack quickly place the setting sometime in the ’50s, and that song title hints at Laura’s motivation for moving: She’s fleeing an abusive ex. Cody isn’t entirely thrilled about relocating, though he is intrigued by the large pond out back–and it shows an interest in him too. Both he and his mom are beset by water-centric nightmares and hallucinations in which a fearsome creature also appears, and a theme seems to quickly emerge: how domestic trauma can manifest in literal monsters haunting the psyche. 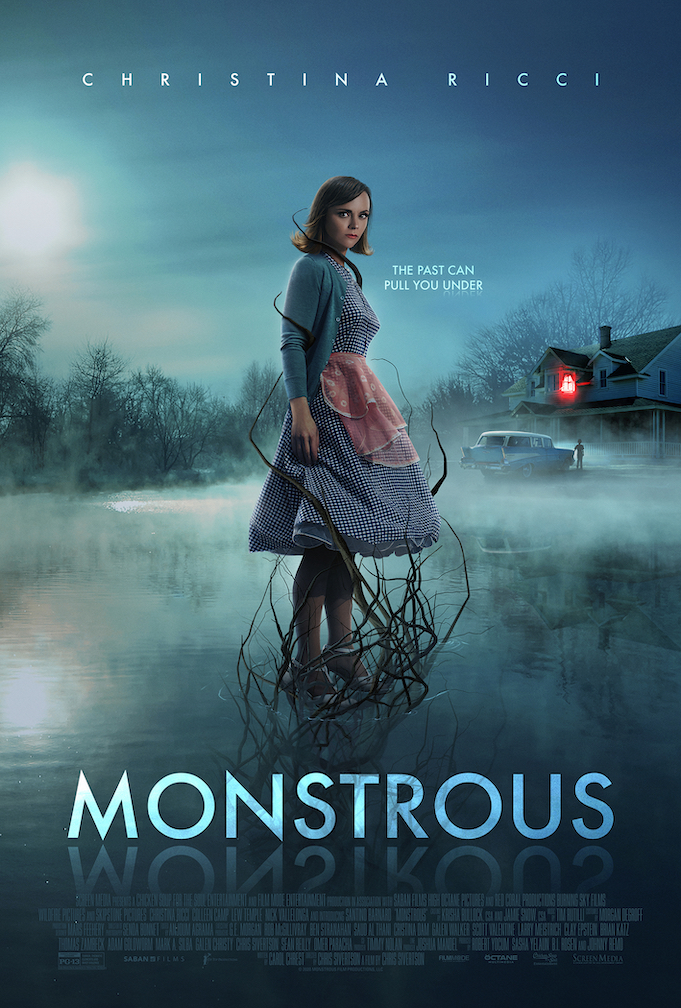 The way things are subsequently presented, however, strongly suggests there truly is a beastly presence lurking around. At the same time, Carol Chrest’s screenplay meanders away from this central threat in odd ways. MONSTROUS seems to forget about its monster for one long stretch; mother and son are terrorized by the beast in one scene, and then Laura happily gives Cody birthday-party invitations to distribute to his classmates the next. Cody begins referring to the new presence in his life as “the pretty lady,” with no corresponding visuals, while Laura looks meaningfully at photos of another woman, whose identity and part in the story are withheld for too long. MONSTROUS also shows a glancing interest in exploring the expectations attached to women in the ’50s, then doesn’t fully follow through. So much is thrown into the mix without satisfying explanation or payoff that you get the feeling Chrest was trying to serve multiple masters in her writing–which is exacerbated when the end credits reveal no less than 41 executive producers.

Director Chris Sivertson brings a fair amount of spooky atmosphere to the piece, and he and cinematographer Senda Bonnet shoot a lot of it in bright, Technicolor-esque hues that befit the period, and are a nice change from the color-drained look of so many contemporary fright fare. Sivertson can only do so much with the more awkward moments, though, like Laura randomly calling a church for help: “I think I have a demon, or something, in my house.” The last-act twist, which observant viewers may figure out in advance, throws the whole story into new relief, shedding new light on Laura’s state of mind while also leaving the audience thinking back over what has preceded it and saying to themselves, “Wait a minute…” (And devotees of the genre won’t have to flash back very far to recall another movie with a very similar switcheroo.) MONSTROUS’ lapses in narrative logic might have gone down easier with an ending that was better thought out to tie all the dangling story threads together.

The Big Reveal comes earlier in THE ANCESTRAL (BÓNG DÈ), and while it adds a new dimension to what has been, up to that point, a very familiar scenario, the generic side of the movie still wins out in the end. This is the latest from Vietnamese writer/director Le-Van Kiet, who previously explored the scary side in HOUSE IN THE ALLEY and THE LOST TOUR: VIETNAM, broke local box-office records with the martial-arts thriller FURIE and made his English-language debut with this year’s Alicia Silverstone-vs.-sharks opus THE REQUIN. THE ANCESTRAL opens with documentary-style footage involving a woman dealing with her mom’s sleep paralysis, presaging the problems that will befall widower Thành (Quang Tuan) and his young daughters Linh (Lâm Thanh My, from Ham Tran’s HOLLOW) and Yen (FURIE’s Mai Cát Vi) when they move into their expansive new house. 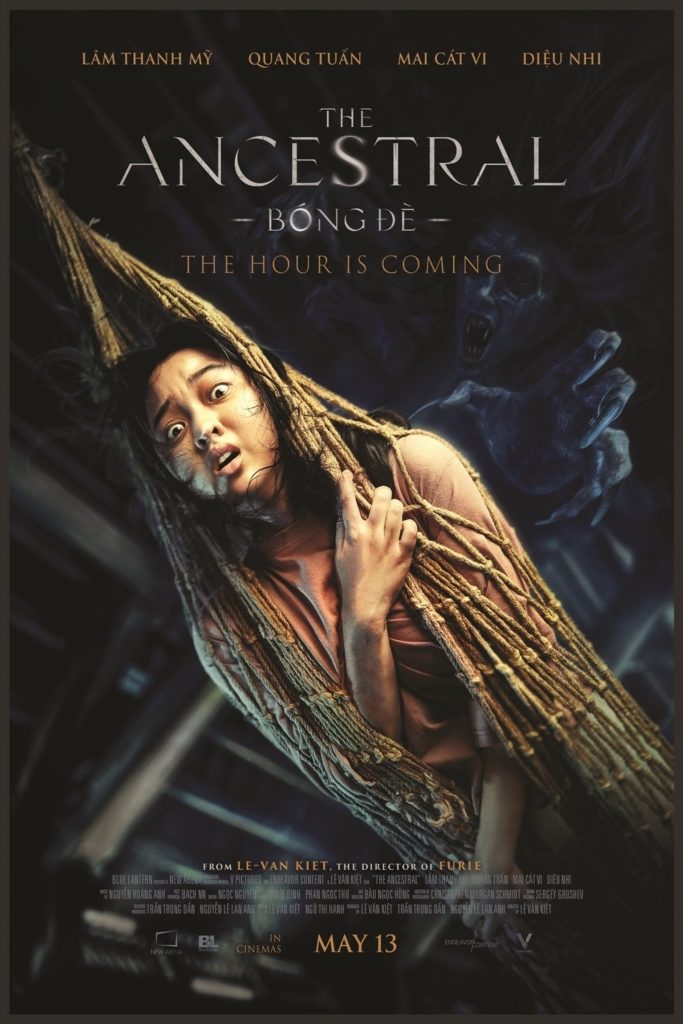 Dad and the girls have a stable, loving relationship helping them get through the recent loss of his wife/their mom, and the only issue is little Yen’s bad dreams and sleepwalking. Linh is loving and supporting of her sibling; Lâm and Mai previously played sisters in Ash Mayfair’s award-winning drama THE THIRD WIFE, and they have a charming, playful chemistry. But their fun and games soon recede as dark forces in their new abode become apparent, and it’s not just Yen seeing scary stuff. When Linh wakes up in the middle of one night, she is greeted by such time-honored haunted-house accoutrements as prowling camerawork, menacing whispers on the soundtrack and strange noises off in the distance. It’s also revealed that Yen is suffering from her own sleep paralysis, complete with the oft-reported shadow people. Thành hires a tutor, Mrs. Hanh (Dieu Nhi), to look after the girls when he’s not around, but she’s not much help against whatever is plaguing them…

And then we learn what’s really going on in the house, which promises to lead THE ANCESTRAL down more interesting avenues. Yet for the most part, Kiet continues to dole out the usual scare tactics, and like MONSTROUS, THE ANCESTRAL hints at addressing women’s issues–in a flashback, the girls’ mom says, “Being a woman is not as easy as it seems”–without meaningfully pursuing them. While the film is polished on most craft levels (sharp and moody cinematography by Christopher Morgan Schmidt and a lush score by Nguyen Hoàng Anh), the CGI employed for the crawling, leaping ghosties isn’t convincing enough to get the blood curdling. There’s one setpiece, in which Linh gets wrapped up and trapped in a hammock by an unseen spirit, that’s quite creepy with simple physical effects–a highlight on the way to a double ending that feels unearned on one side and too cruel by half on the other.