I often take notes while watching a movie I’m going to review, and when THE NORTHMAN was over, I found that I had written very few. Which makes sense, because this isn’t a movie you respond to intellectually–which is not to say it lacks intelligence. It’s a brawny, lusty, bloody epic of big emotions and in-your-face intensity–a movie that happens to you as you’re watching it, both visually and aurally. (To the usual advisory to see it on the biggest screen possible, it should be added to catch it at a theater with a really good sound system.)

THE NORTHMAN is exactly the kind of historical adventure one would expect from Robert Eggers, who made his bones with the much smaller THE WITCH and THE LIGHTHOUSE. Tinged throughout with horror and occult elements, this Viking saga recalls THE WITCH’s immersive obsession with historical detail and THE LIGHTHOUSE’s study of men and masculinity in extremis. (Not reminiscent of THE LIGHTHOUSE: Willem Dafoe’s role here pretty much amounts to a cameo appearance.) Written by the director with Icelandic novelist/poet Sjón, it tells a story that’s elemental rather than complex; indeed, it’s a simpler tale than either THE WITCH or THE LIGHTHOUSE, though the film runs significantly longer than either of those, at over two hours. As a result, there is ultimately a sameness to THE NORTHMAN’s emotional impact after a while, though the movie never entirely loses its hold. 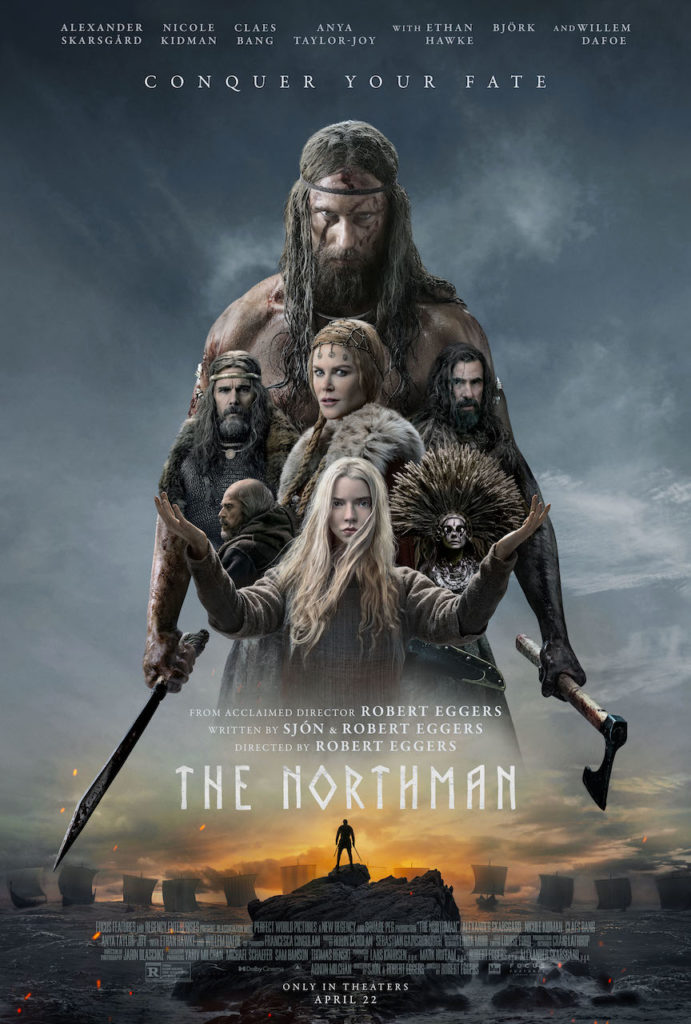 That tale is based on the classic Norse saga from which William Shakespeare drew the story of HAMLET, with its hero being Prince Amleth, first seen as the preteen son of King Aurvandil (Ethan Hawke) and Queen Gudrún (Nicole Kidman). Theirs is a pagan world (Christianity is later denounced thusly: “Their god is a corpse nailed to a tree”) in which the young Amleth (Oscar Novak) and his father take part in a manhood ceremony that finds them both behaving and howling like dogs. Amleth is then forced to grow up fast when he witnesses the death of Aurvandil and the abduction of Gudrún at the hands of his scheming uncle Fjölnir (Claes Bang), setting in motion a revenge plot that will curdle in Amleth’s mind for years, until he has become a strapping warrior (Alexander Skarsgård) who is first seen indulging in the same kind of pillaging Fjölnir enjoyed.

In this sequence and throughout THE NORTHMAN, Eggers shoots his action setpieces in long takes that draw you right into the grisly, barbaric mayhem, and establish this long-ago era as one without pity. Amleth has essentially become the same kind of man as the uncle he despises–until he learns that a boatful of newly captured slaves is to be shipped to Fjölnir. Hiding himself among their number, he ultimately arrives in the Icelandic community ruled by his uncle, who of course doesn’t recognize the grown-up child he once tried to kill. Thus Amleth is able to hide in plain sight as he puts into motion his plan to avenge himself and free his mother.

While THE NORTHMAN’s overall tone is rooted in stark, visceral reality, it is shot through with touches of the supernatural and surreal that mesh well under Eggers’ direction. There are multiple oracles/witches pointing Amleth toward his destiny (including one played with fitting exoticism by Björk), while a key foe at one point is, in effect, a zombie. Then there’s Olga (Anya Taylor-Joy, reuniting with the director from THE WITCH), a fellow slave with whom Amleth becomes romantically and carnally involved, who possesses otherworldly gifts of her own. The palpable mutual passion Skarsgård and Taylor-Joy bring to their scenes together helps offset the emphasis on vengeance and brutality that marks much of the emotion on view here, which is compelling for some time but does leave one desiring more variation to the tone and tenor after a while.

There’s no denying or criticizing the unwavering commitment of the performances, though (and Kidman has an especially potent scene late in the proceedings). Same goes for the craft from top to bottom, always in support of Eggers’ relentless vision. The environments and outfits created by production designer Craig Lathrop and costume designer Linda Muir are occasionally heightened and always appropriate, and they and the striking locations in Iceland and Ireland are beautifully captured by the gorgeous, sometimes fire-lit cinematography of Jaren Blaschke (who was Oscar-nommed for THE LIGHTHOUSE and deserves another nod here). First-time film composers Robin Carolan and Sebastian Gainsborough, whose background is largely in electronica, contribute a score that utilizes traditional instruments to alternately thundering and hypnotic ends. However you respond to THE NORTHMAN emotionally, it’s clear Eggers has made exactly the movie he set out to make, and that he can see his ambitions through as successfully on a megabuck production as he did in his previous, much smaller pictures.