I’ve written this before, but it bears repeating: The problem with adapting a video game like RESIDENT EVIL to the movies is that the games were themselves inspired by movies, which makes it a particular challenge to come up with something that will have a fresh impact. Writer/director Johannes Roberts and his team have been careful to make everything in WELCOME TO RACCOON CITY look and feel just like the Capcom adventures, without any creative inspiration about how to translate them into a true feature film–i.e. one with a plot that makes sense, characters worth caring about and stakes that result in genuine scares. 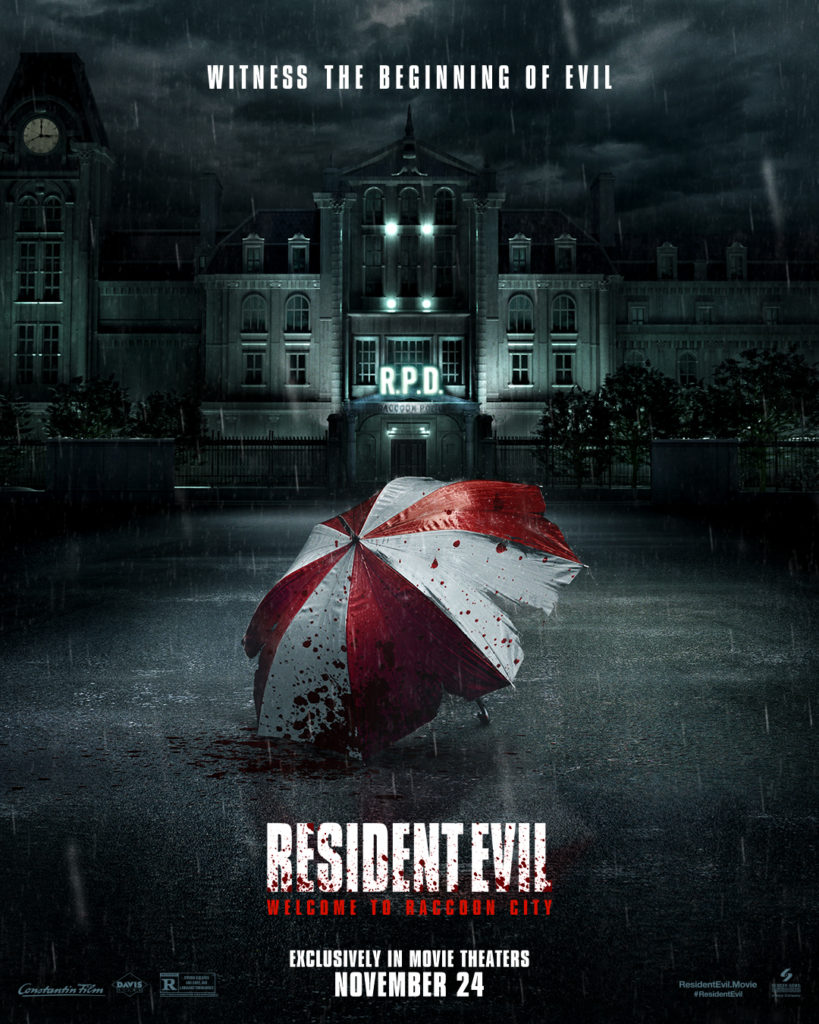 To be sure, the sequels that followed Paul W.S. Anderson’s pretty entertaining original RESIDENT EVIL were weak on narrative, character and true frights as well, so it’s not like this reboot has a very high bar to clear. And there is a pleasing spareness and simplicity to the early portions of WELCOME TO RACCOON CITY, following a prologue that finds orphaned young siblings Claire and Chris Redfield in the Raccoon City Orphanage, which is haunted by a presence that might be a ghost or something even worse. Years later–September 30, 1998, to be precise–Claire (Kaya Scodelario) is hitching a late-night ride in an 18-wheeler back to her hometown, which was once dominated and has now been abandoned by the up-to-no-good Umbrella Corporation. Roberts and DP Maxime Alexandre establish a decent mood of eerie isolation in the largely deserted town, and in fact Alexandre’s cinematography is the most praiseworthy element of WELCOME TO RACCOON CITY. While keeping things oppressively dark, he frequently throws in splashes of color to avoid the monochromatic sameness that afflicts many films of this type.

What goes on within his frames is pretty colorless, though. Following scenes in a bar and a police station in which all the familiar names are introduced, Chris (Robbie Amell) and some fellow cops depart for the outskirts-located Spencer Mansion, where another squad has gone missing. Claire, rookie Leon S. Kennedy (Avan Jogia) and Chief Irons (Donal Logue) are left behind at the station, which soon becomes besieged by the remaining residents, now mutating into undead killers. In other words, it’s the scenarios of the first two RESIDENT EVIL games in one movie, and much of WELCOME TO RACCOON CITY jumps back and forth between the two, consistently undercutting what tension there is.

And that ain’t much. Without a strong central hero like Milla Jovovich’s Alice (the one consistent quality of the previous EVILs), there’s no one to root for among the cardboard protagonists, and even within the limited parameters Roberts sets for himself, there’s a remarkable lack of imagination in the action staging. At least half a dozen times, someone will be tussling with a zombie, monster or evil human, and then someone else offscreen shoots the attacker dead. Although the prosthetic work by Applied Arts FX Studio is pretty good, the ghouls are strictly standard-issue, and too much of the bloodshed as well as the more inhuman creatures have been created via shabby CGI. In particular, the Licker literally looks like it has just escaped from the game realm.

For some fans, perhaps, just having all the familiar beats and beasts on the big screen will be enough. Certainly, Roberts’ approach leans heavily on the nostalgia in multiple ways; he takes the ’98 setting as license to drench the soundtrack with songs by everyone from Journey to The Cardigans to 4 Non Blondes, and there are bits reminiscent of everything from SUSPIRIA to DEMONS to THE STAND. But RESIDENT EVIL: WELCOME TO RACCOON CITY behaves like there haven’t been hundreds of zombie movies since the first game debuted, to the point where everything about it feels second-hand and too late to the game. Fidelity to the original IP is certainly to be valued in a cinematic adaptation, but it shouldn’t be the only thing a film has going for it. Bottom line: If you want to see something that plays just like the video game, play the video game.