It’s a burden to say this, but PLAYDURIZM is one of those films that slipped under the radar. In the midst of a surplus (no complaints!) of horror content, it’s hard to keep track of everything. Yet, PLAYDURIZM creates a whole new neon canvas of pop art aesthetics that ends up drenched in discovery, acceptance, and blood. It’s a queer horror of the body and mind that punctuates its emotional beats with Cronenbergian vibes. First-time director Gem Deger has crafted a film that is as much a pleasure for the eyes as it is a journey through trauma.

PLAYDURIZM opens with a young man named Demir (portrayed by director Gem Deger) waking up in an unfamiliar bedroom. He seems to have a history with the two people living in the apartment, Andrew (Austin Chunn) and Drew (Issy Stewart), a couple who have no problem with sharing their sadistic side. Demir is infatuated with Andrew, and that kickstarts a dive into understanding why his world has become a drug-fueled, blood-soaked fight for love. 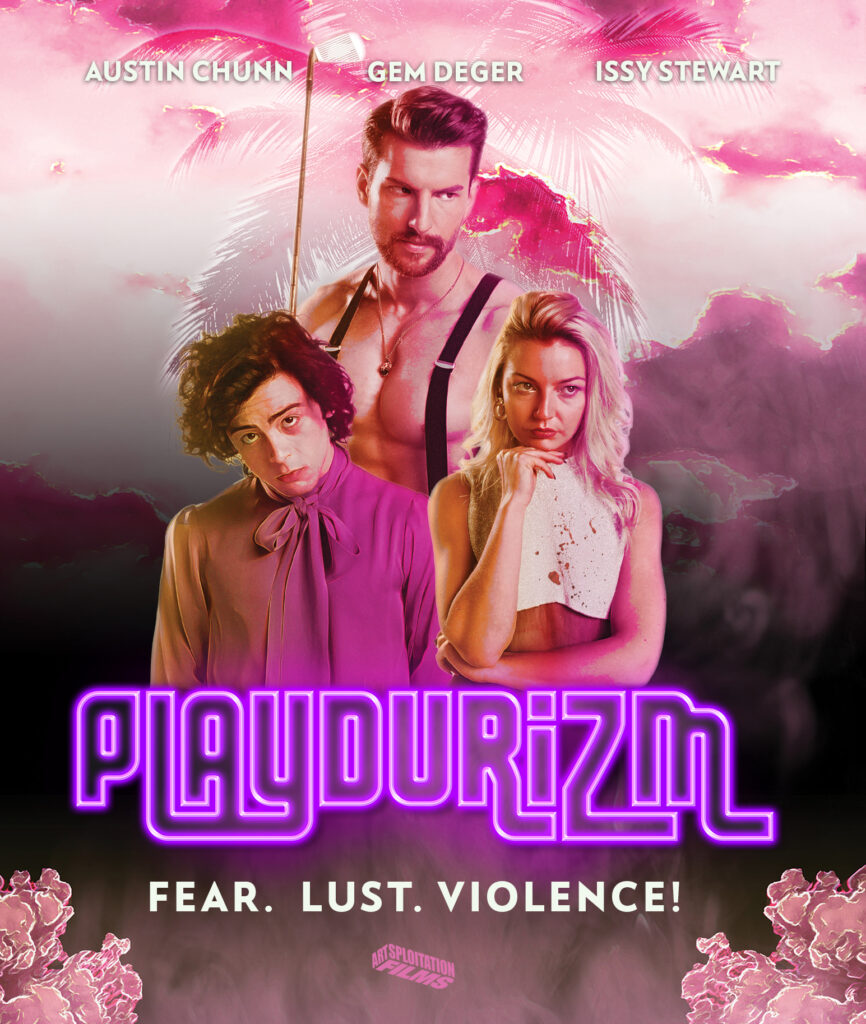 From the beginning, PLAYDURIZM’s aesthetic hits the mark on its use of neons that has become popular in the horror films of the past few years, but there’s something a little new added. With the colors of the set featuring a neon pink in contrast to purple balloons and multicolored furniture, the film is a piece of pop art. As it delves deeper into darkness, the neons and contrasting colors become darker, giving the visuals an important place within the film. And PLAYDURIZM gets dark. There’s a reason why Demir has been placed into this world that turns out to not be as unfamiliar as they originally thought. We’re given insight into the events that lead up to the arrival at Andrew’s apartment, and these flashbacks are visually contrasted with dull greens and browns, deceitfully giving us an illusion of the bland and boring until we reach the climax of the film. It’s then that we know that the dull colors are actually a gritty precursor to the film’s most uncomfortable scene.

The film’s three stars are part of the visuals. Demir, Andrew, and Drew all pop off of the screen as if they’re in 3-D. One would think that with the striking dominance of the background, we wouldn’t be captivated entirely by the performers. However, their wardrobe and makeup, combined with the occasionally gruesome effects and expert camerawork, draw you in. The performances given by these three are all completely justified. Deger’s Demir is innocent, almost like Alice going through Wonderland, until they reach the climax of their story. Chunn portrays Andrew as a gorgeous douche to a tee until he has to showcase a little more depth. Stewart gives a staunch performance as Drew, the jealous hard ass, and nails her moments of emotion when Deger places her in perfectly centered medium shots.

At its heart, PLAYDURIZM is a story of a queer individual who has chosen to place themself in their favorite movie, starring the object of their celebrity crush, to escape a particularly traumatic event. In Demir’s case, it is sexual assault. Demr’s ability to restructure his favorite movie to play out as if they were the main character is PLAYDURIZM’s biggest strength. Ultimately, PLAYDURIZM’s meta-ness is a step beyond the usual. Deger’s vision is pop art of the darkest kind. It’s wholly unique and deserves to be seen by more horror fans.