Part of the tour de force of Mia Goth’s dual performance in X lay in how different-yet-thematically similar her characters were, to the point where it particularly impressed only once the end credits revealed that it was a dual performance. Before that, she disappeared behind heavy prosthetics and a distinct physicality into the role of Pearl, the elderly woman who doesn’t cotton at all to the troupe of pornographers (including Goth’s equally specific Maxine) holing up at her place to make a skin flick. Pearl was a unique villain in the slasher pantheon, murderously motivated not by simple madness but by her own advanced age that has frustrated her as a sexual being. There were quite a few layers to the role hinted at by Goth’s turn, which now find full flower in PEARL, reuniting the actress (now also a co-writer) with X director Ti West.

Horror prequels like this, flashing back to a villain’s formative years, have always been a tricky business, as explaining (often overexplaining) what made them the killers they became risks robbing them of their mystery and menace. And indeed, since we know where its title character winds up, PEARL works not so much as a suspenseful thriller but as a character study dependent on its central performance, in which its star delivers in spades. It’s The Mia Goth Show from start to finish, which she and West have tailored to display her many and considerable strengths. 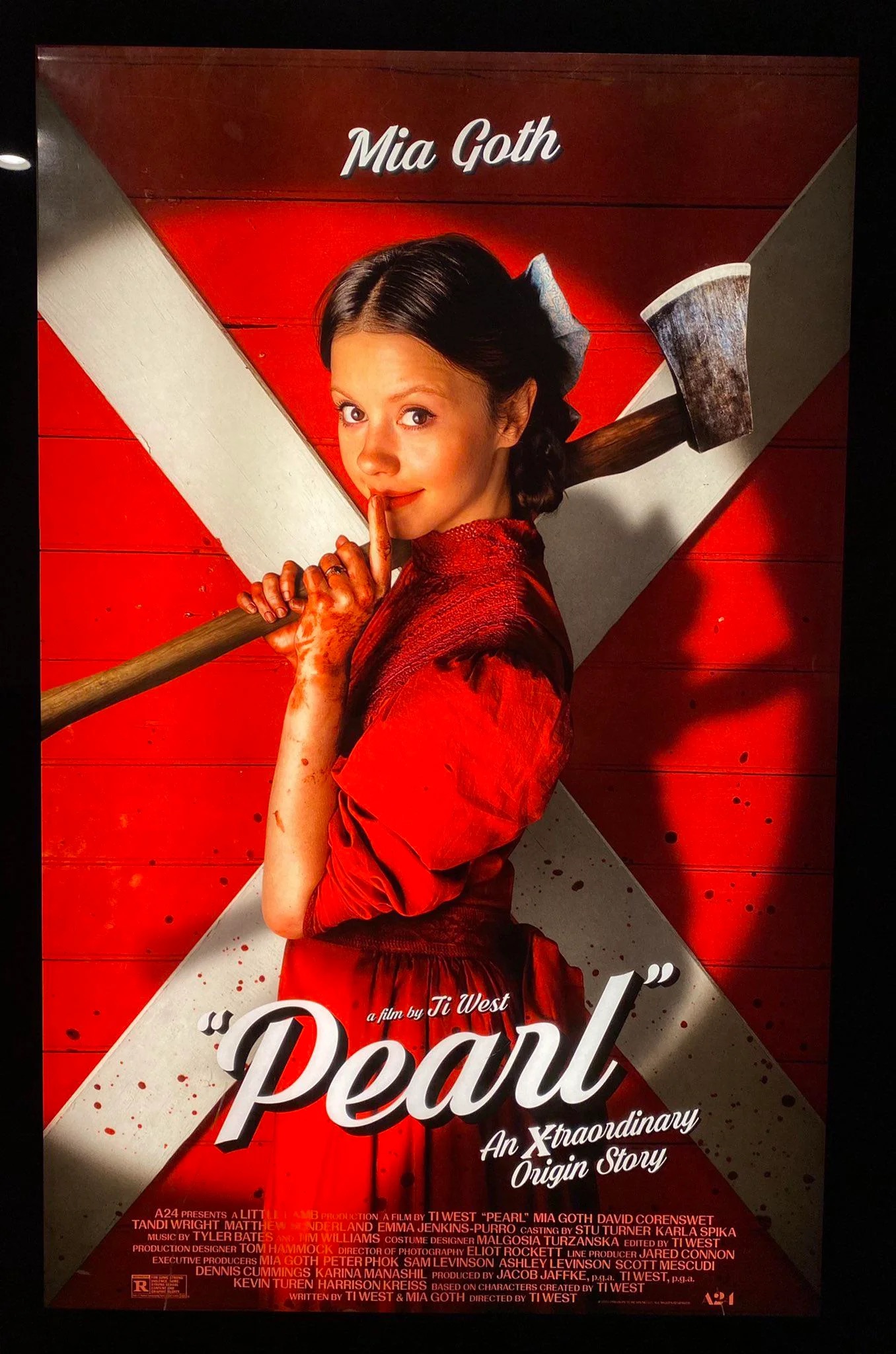 It is, indeed, the kind of showcase that this movie’s Pearl would kill for–perhaps literally, if the opportunity arose. It’s 1918, and our heroine is a small-town gal who dreams of Hollywood, taking in musicals at the local movie theater. It isn’t just that promise of glamour that encourages her dreams of escaping to Tinseltown; she has an oppressive home life with her strict, overbearing mother Ruth (Tandi Wright) and a father (Matthew Sunderland) who’s confined to a wheelchair in a vegetative state. Her husband Howard is away fighting in WWI, and Pearl’s only confidant is her sister-in-law Misty (Emma Jenkins-Purro), a bubbly blonde who reveals to Pearl a potential way out: an impending audition for a traveling dance show. It beckons to be the answer to Pearl’s dreams…if only she wasn’t a tad unbalanced, as she first demonstrates when she gets a little too friendly with a cornfield scarecrow.

From the start, West makes PEARL a very different film stylistically from the gritty, grainy, ’70s-informed X. Its influences belong to an older tradition of Technicolor screen fare, and it begins with doors opening to reveal a beautiful widescreen image of Pearl’s family’s farm, as Tyler Bates and Tim Williams’ music dramatically swells. (This is the first of a number of times PEARL harks back to THE WIZARD OF OZ, another story of a farm girl yearning for escape.) The colors of returning DP Eliot Rockett’s cinematography are rich throughout, with multihued buildings in Tom Hammock’s production design that make everything feel like we’re seeing it through Pearl’s starry eyes.

She finds further hope when she becomes involved with the picture house’s projectionist (David Corenswet), who seems worldly in a way the other townspeople are not (“I’m what more civilized people refer to as bohemian,” he tells her). He awakens her sexuality by showing her a French stag film–which also serves as a tie to the eventual events of X. And just as in that film, a story of showbiz ambition ultimately becomes a bloodbath, as Pearl finds her desires stymied and violently lashes out.

The gore in PEARL is as extreme and explicit as it was in the prior film, though perhaps the ickiest visuals are those of a roast pig that rots away in maggoty fashion over the course of the movie, a metaphor for Pearl’s deteriorating state of mind. What really holds the attention throughout, however, is Goth’s multifaceted performance; she perfectly elicits Pearl’s innocent hopefulness, her burgeoning mania and everything in between, keeping us hoping for her dreams to come true even as we know she’s headed down a nightmarish avenue. She and West have even written her a lengthy, revealing monologue, captured in one unbroken take–almost as long as, though quite different from, Rebecca Hall’s in RESURRECTION–that she delivers beautifully.

Throughout PEARL, in fact, West lets crucial scenes play out at length to strong effect, from a crucial murder also presented in one long take to the buildup to Pearl’s audition, as she gets closer and closer to that door, able to hear a little more of the music inside as she goes. There’s something relatable about that, and it is the mix of empathy and tension in West’s filmmaking and Goth’s acting that makes PEARL both a worthy follow-up to X and a compelling psychochiller in its own right. Can’t wait to see how the duo deals with the ’80s in the forthcoming MAXXXINE.