Movie Review: “PARANORMAL ACTIVITY: NEXT OF KIN” is a miss with the Amish

Consumer video sure has changed since Oren Peli shot the original PARANORMAL ACTIVITY in his own house over 15 years ago. These days, you can capture theater-quality images on your iPhone if you know what you’re doing, and anyone can own a drone if you fill out the required paperwork. Thus, PARANORMAL ACTIVITY: NEXT OF KIN, the latest in the found-footage franchise, contains sharp, nicely composed widescreen frames, sweeping aerial photography, and other shots that give it the feeling of…well, every other film out there in the marketplace.

Handheld horror of this type lives and dies on its ability to create a sense of immediacy–the sense that you’re experiencing the scary stuff right along with the characters–which gets lost when it looks too slick. It doesn’t happen often in NEXT OF KIN, most of which has the rough and shaky veneer of its predecessors, but often enough to dispel the mock-documentary vibe. Beyond that, there are heavily edited scenes and others with musical accompaniment, including loud stingers on jump scares, that strand the movie between a traditional feature and a vérité you-are-there experience. While it’s nice to see director William Eubank get another high-profile horror feature—albeit one that has wound up going direct to streaming—after last year’s accomplished but underattended UNDERWATER, he hasn’t fully committed to the found-footage form here. 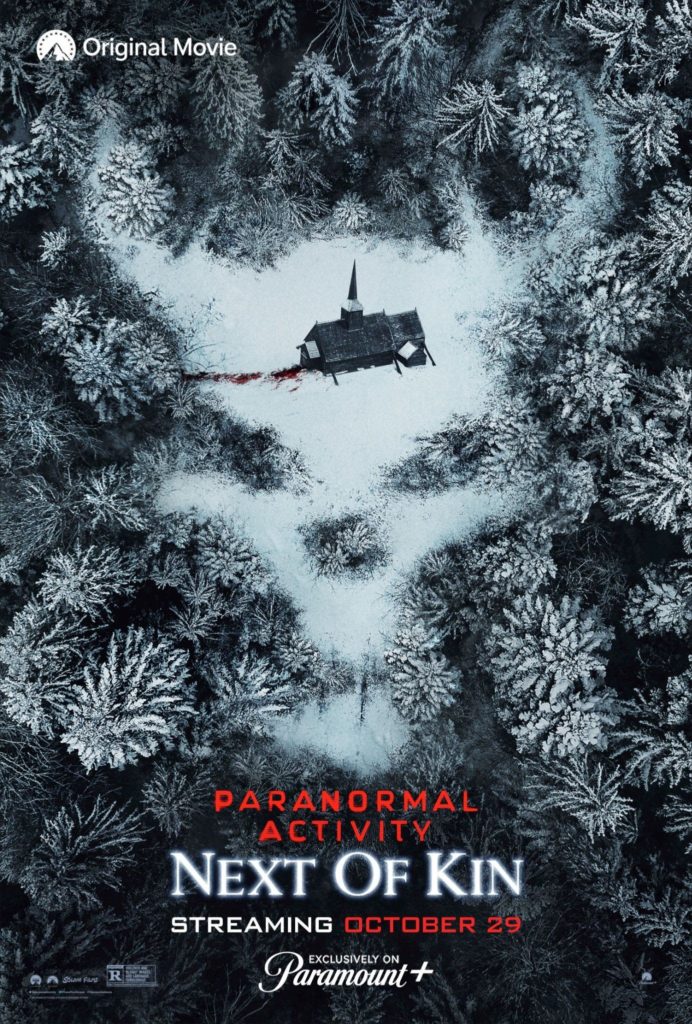 That wouldn’t be as much of an issue if this reboot truly went off in fresh directions. While NEXT OF KIN has no narrative connection to its predecessors, it doesn’t find any interesting new trails to explore either as a through-the-lens-of-another exercise or in its chosen subcategory of religious horror. That’s particularly disappointing given that it was written by Christopher Landon, a veteran of past PARANORMALs who more recently gave the slasher genre a satirical kick in the pants with the HAPPY DEATH DAY duo and especially FREAKY. The time is more than ripe for a movie that turns the PARANORMAL formula on its ear and has some fun with it, but instead, NEXT OF KIN parties like it’s 2009–one more minisaga of a small group heading into a remote part of the country with documentary ambitions and not a lot of survival smarts.

In this case, a young woman named Margot (Emily Bader) leads the trip in search of her roots. Abandoned by her birth mom at a hospital when she was an infant and raised by adoptive parents, she has made contact with Samuel (Henry Ayres-Brown), a member of her real family who lives in Amish country (actually filmed in upstate New York). Margot wants to capture her homecoming on video, and so brings along cameraman Chris (Roland Buck III) and eccentric soundman Dale (Dan Lippert, stealing the movie with his Dude-esque attitude). The small community, needless to say, isn’t initially welcoming of the outsiders and their van full of equipment, but soon village elder Jacob (Tom Nowicki) is allowing them to not only stay in his house but roll camera at his dinner table.

Certain horror fans might recognize Nowicki from Bryan Bertino’s THE DARK AND THE WICKED, which had some scary, original ideas about rural family-ties terror. NEXT OF KIN, on the other hand, just ticks off boxes. There are creepy little kids saying portentous things and popping up unexpectedly for quick jolts. There’s a creepy attic to be explored in the middle of the night. There’s a creepy church on the outskirts with demonic paintings on the floor. There’s no cell service, natch. And while the Amish environment provides a change of scene from the previous PARANORMAL movies, it’s not explored beyond standard devout-religion-is-bad tropes, and mitigates the fear factor of its predecessors: the sense of evil invading one’s own home and family. In the past PARANORMALs, the protagonists struggled to detect and dispel dark forces literally hitting them where they live; Margot and co. are just the latest unlucky travelers in a bad place who fail to get out when the getting’s good.

Their behavior becomes more illogical and implausible as NEXT OF KIN goes along, though the movie does rally in its final act once the nature of the diabolism is revealed. A lengthy sequence in an underground passage delivers the chills, as does a subsequent tableau in the town, and setting the action in both the dead of night and a blinding snowstorm ups the tension. Too much of what leads up to these setpieces, unfortunately, is second-hand and overly familiar, and misses the chance to truly re-energize the PARANORMAL franchise. At one point, when stuck in a tight spot, Margot-behind-the-camera says, “This is going to be interesting”…but then there’s a cut to black–which is unfortunately emblematic of NEXT OF KIN as a whole.