First of all, to address a subject that has come up in a few online comment chains: Netflix’s TROLL has no connection to André Øvredal’s TROLL HUNTER, though both hail from Norway and feature similar (traditional Scandinavian) creature designs. Øvredal’s breakout film made both clever and awe-inspiring use of the found-footage format to offer a different approach to monster-moviemaking, while the new TROLL (debuting December 1 on the streamer) follows the traditional KONG/kaiju playbook through and through, with a change of scenery.

Directed by Roar Uthaug (still tied with Olivier Megaton as the best-named international action auteur ever), TROLL opens with the expected prologue in which a child is told about ancient legends; in this case, a girl named Nora learns from her father of the trolls that were turned into stone peaks ages before. Cut to the present day, 20 years later, when a mining team boring a tunnel through one of those very same mountains awakens something that greets them with an awful roar, and then major destruction. Can you already guess that Nora has grown up to be a paleobiologist (played by Ine Marie Wilmann) who is called in by the government to help deal with the massive, destructive force that has been unleashed? 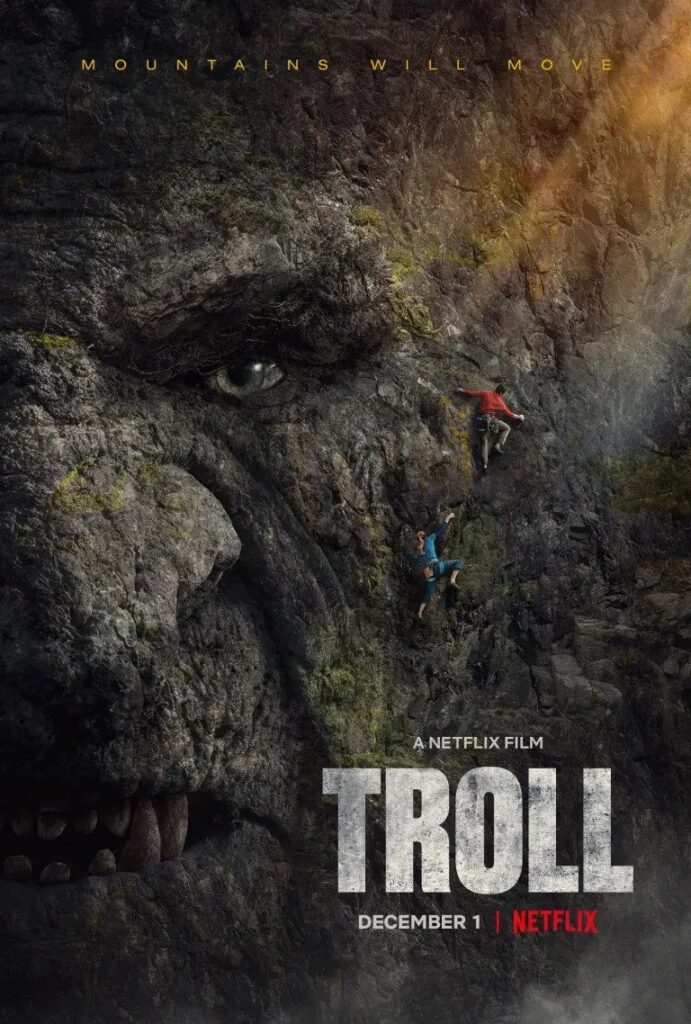 If you can, and are enough of the fan of the giant-beast-vs.-humankind form (raises hand) that you can get a certain pleasure out of the familiar conventions, then you’ll likely have a good time with TROLL. There are war-room round-table discussions and hand-wringing about how to solve the problem among government officials, scientists (who want to preserve the creature) and military types (who yearn to destroy it). There are many location transitions, with accompanying subtitles (“Prime Minister’s Residence, Oslo”). There’s a crazy old buzzard dwelling in a ramshackle house out in the wild who can help out; in this case, he’s Nora’s own gone-to-seed dad Tobias (Gard B. Eidsvold), who at one point quotes Jeff Goldblum from JURASSIC PARK. There are in fact numerous references in TROLL’s script, by Uthaug and Espen Aukan, to not just JURASSIC (a vibrating cup of coffee also appears) but STAR WARS, STAR TREK, CALL OF DUTY and others as well. And when the subject of climate change comes up during one debate, there is the inevitable Greta Thunberg joke.

Clearly, Uthaug is not taking all this entirely seriously, but he never pitches TROLL as a spoof. He takes spectacle seriously–even when at least one of the operations enacted to subdue the titan border on the downright goofy–and to that end, the visual effects of the troll and its devastation are first-rate, both out in rural areas, including a great reveal that’s unfortunately given away in the trailer, and in the midst of the city of Oslo. (There are a few impressive physical setpieces too, like the half house left behind after one of the creature’s attacks.) The troll is every bit as convincing as Godzilla and co. appear in the more expensive Warner Bros./Legendary MonsterVerse pictures, and some might appreciate that the storytelling here is more compact than in those epics.

Tight as it is, the narrative could have used a few more variations on the form, and the same goes for the people populating it. The small group who become (of course) humanity’s last hope consists of Nora, Tobias, Andreas Isaksen (Kim Falck), an advisor to the Prime Minister who delivers the majority of the pop-culture shout-outs, and Captain Kristoffer Holm (Mads Sjøgård Pettersen), the soldier who learns to not be so gung ho about taking the most confrontational option. The actors are likable enough as their characters go through their prescribed paces, hitting beats that are as pleasing as they are predictable–as when Andreas’ adorkable girlfriend and fellow nerd, bespectacled communications techie Sigrid (Karoline Viktoria Sletteng Garvang), gets a hero moment.

Also part and parcel of this kind of movie is the sympathy occasionally engendered for the monster; the troll is, after all, only reacting to the plundering of the environment in general and its home in particular. And for all the been-there-seen-that TROLL elicits, the movie has been made with sufficient sincerity and confidence that you’ll likely feel for the big guy, and for the puny humans who believe it has as much right to live as we do.