Movie Review: “MALIGNANT” is WTF for both the right and wrong reasons

In a recent interview, director James Wan compared MALIGNANT to the kind of movie you’d find among the back shelves of the horror section in video stores during the ’80s and early ’90s. The film turns out, in fact, to be a stealth remake of an independent fright flick that became a cult favorite during the VHS era, though to even hint at which one would give the game away.

For most of its running time, though, MALIGNANT is a variation on the tried-and-true premise of a woman who has horrifying visions of a murderer’s crimes. As if Madison (Annabelle Wallis) doesn’t have enough problems in her life already; when first met, she’s on the fourth in a series of pregnancies that have all previously ended in miscarriages, and married to an abusive jerk who says things like, “How many times do I have to watch my babies die inside you?” When Madison witnesses a shadowy, powerful figure brutally offing the guy, it almost seems like it’s doing her a favor. She is properly horrified, however, and this is only the beginning; soon she’s front and center as the villain gruesomely dispatches people she doesn’t know, transported into the setpieces via eye-catching digital transitions. 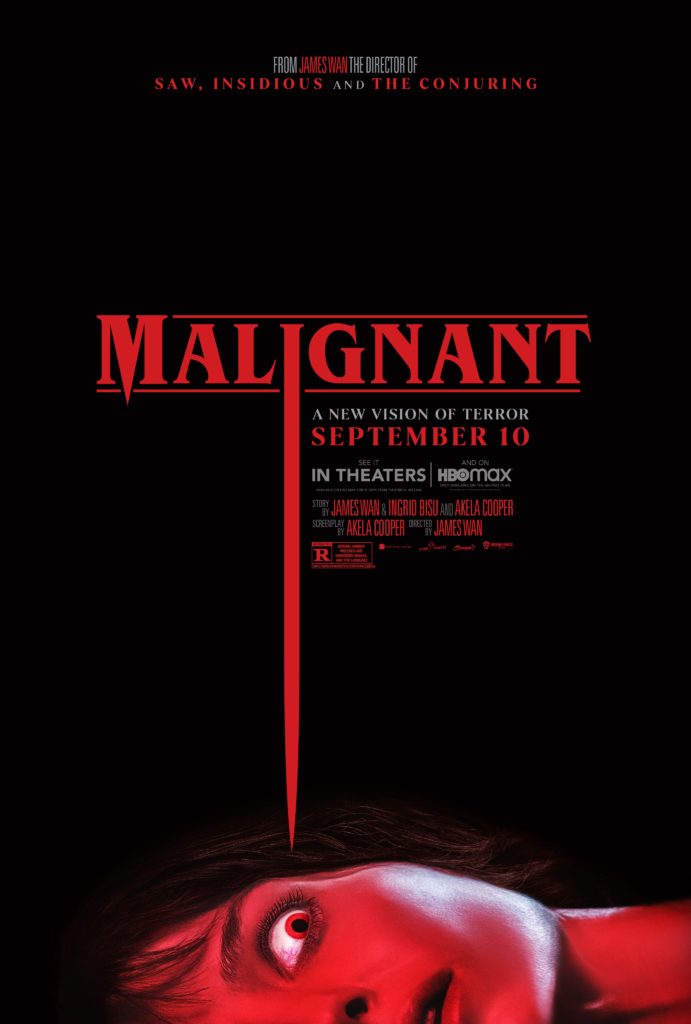 Visually, at least, Wan directs the hell out of MALIGNANT, which was scripted by Akela Cooper from a story by Wan and co-star Ingrid Bisu. The film is shrouded in oppressive atmosphere, courtesy of cinematographer Michael Burgess, with some of the same types of teasing misdirection and aggressive camera moves Wan employed so successfully in INSIDIOUS and THE CONJURING. There are also heaping helpings of gore, the likes of which haven’t been seen in his filmography since the SAW days. What’s missing here are a scenario, characters and performances as compelling as those in the movies that made Wan one of the leading lights of 21st-century horror.

As the slaughter spree with Madison at its center continues, she is supported by her sister Sydney (Maddie Hasson) and investigated by detectives Kekoa Shaw (George Young) and Regina Moss (Michole Briana White). All of them tend to speak with the most obvious expository dialogue, and there’s little spark to any of the acting. Det. Moss’ characterization is especially unfortunate, a compendium of sassy African-American lady-cop clichés. The most persuasive turns are actually given by a pair of younger actresses: Mckenna Grace (THE HAUNTING OF HILL HOUSE, ANNABELLE COMES HOME) and Madison Wolfe (THE CONJURING 2), seen in video footage of two of the protagonists as children. Fans of ’90s cinema may enjoy seeing DEEP BLUE SEA’s Jacqueline McKenzie and HELLRAISER III: HELL ON EARTH’s Paula Marshall in small roles, and Quentin Tarantino favorite Zoe Bell turns up as a jailhouse toughie when Madison is inevitably arrested for the grisly crimes.

Her sequence also encapsulates another of MALIGNANT’s problems: Too often, it’s hard to know whether Wan and co. are kidding or not. Madison actually says, “I’m not supposed to be here. I didn’t do anything wrong!” from behind bars, and the equally inevitable Medical Facility Where Awful Things Happened, first seen in a prologue, is a ridiculously imposing Gothic pile sitting atop surf-lashed nighttime cliffs. At many moments, the movie seems on the verge of tipping over into intentional camp, but it’s all played very straight, up to the point where a final-act revelation sends everything hurtling into gonzo territory.

This twist certainly gives MALIGNANT a jolt of WTF energy, while it will also likely remind horror buffs of some past favorites and opens up a few unanswered questions and serious plausibility issues, even within the movie’s own heightened reality. It leads to the movie’s biggest bloodbath, which is certainly energetic and splattery but has little dramatic weight and plays like something out of a video game. (An earlier, less showy sequence of Det. Shaw pursuing the acrobatic villain through, outside and under a building packs a lot more excitement.) By the end,      MALIGNANT feels like about a half-dozen of those VHS rentals glommed into one movie: Some psychic horror, some slasher horror, some body horror, a dash of women-in-prison, etc., without sufficient human interest to hold it all together or get us genuinely involved and terrified.