Movie Review: “M3GAN” is funny and frightening while it toys with current concerns

The first thing to know going into M3GAN is that it’s more of a horror/comedy than the promotion is letting on (those much-distributed glimpses of dancing M3GAN in the trailer notwithstanding). But then, that becomes clear during the hilarious introductory commercials for Purrpetual Petz, a line of interactive animal dolls clearly intended to suggest Furbys–remember those?–with added artificial intelligence. And M3GAN, the first in what’s planned as a long line of collaborations between Jason Blum’s Blumhouse Productions and James Wan’s Atomic Monster, is able to incorporate satire of the toy industry and some fairly pointed commentary about technological parenting by proxy into a fun/scary film that represents the latest evolution in killer-doll entertainment.

Like the CHILD’S PLAY remake but with a more incisive point of view, M3GAN eschews the supernatural to play off the more relatable modern fear that our electronics may turn against us, and our kids. Gemma (Allison Williams) is a top product developer at the Funki company who’s supposed to be working on an update of the Petz, but has been secretly putting together a human-scaled, AI-enhanced plaything with colleagues Cole (Brian Jordan Alvarez) and Tess (Jan Van Epps). It’s the Model 3 Generative Android, or M3GAN, who’s intended to be a perfect, lifelike companion to little boys and girls (provided their parents can afford one), who can not only react but learn. Circumstances lead Gemma into a situation where she can test M3GAN out at home: her little niece Cady (Violet McGraw) loses her parents in a car accident, and Gemma becomes the girl’s legal guardian. 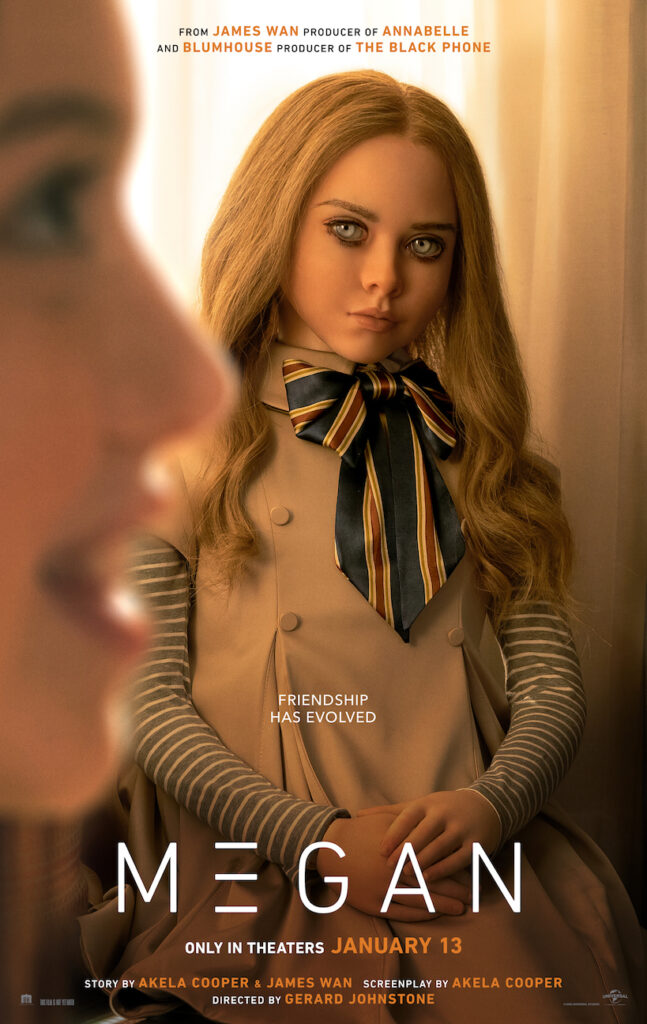 Once Cady comes to stay with Gemma, M3GAN establishes in a series of concise little scenes that the latter, though she does care for Cady, isn’t perfectly suited for guardianship. She doesn’t quite know how to communicate with Cady, and the only toys she has in her house are the “collectibles” on the shelf that are not to be touched (the commodification of objects that are supposed to simply bring kids joy is another subtheme running through Akela Cooper’s screenplay). Williams, reteaming with the Blumhouse gang from GET OUT, nonetheless gives Gemma a sympathetic core as she tries to do the right things, and plays well with McGraw, an accomplished young actress previously seen in Mike Flanagan’s DOCTOR SLEEP and THE HAUNTING OF HILL HOUSE. McGraw also responds very naturally to M3GAN, brought to “life” via excellent effects by Adrien Morot and Kathy Tse, the unerringly convincing physical performance by Amie Donald and voice work by Jenna Davis that makes the doll seem almost, but not quite, human.

The uncanny valley is what makes M3GAN seem a little off right at the start, even as she proves to be the perfect combination of playmate and parental figure for Cady. Director Gerard Johnstone, who previously made the criminally undercelebrated HOUSEBOUND, knows just how and when to throw in a M3GAN reaction shot to get the audience giggling in nervous anticipation, and in general finds just the right pitch of menace and amusement throughout the film. Before Gemma starts to cotton to the fact that her creation has developed too much of a mind of her own, there must of course be a few intermediate victims, and though the targets of M3GAN’s wrath are obvious from the moment they appear on screen, Johnstone successfully creates suspense in the buildup and presents their fates as good, nasty fun.

There is also enjoyment to be had at the movie’s skewering of the corporate world, as embodied by Gemma’s excitable boss David (Ronny Chieng). He has a number of amusing moments as he first distrusts Gemma’s ambitions, and then becomes convinced that M3GAN will allow Funki to “kick Hasbro in the dick.” Beyond the superb work on M3GAN herself, the film is finely crafted in the low-cost/high-quality tradition of Blumhouse and Atomic Monster, with cinematography by Simon Raby (DEATHGASM) and production design by AVATAR Oscar-winner Kim Sinclair that alternate brightness and cheer with shadowy, eerie ambience. The contrasting moods are highlighted by the score by Anthony Willis, whose appropriate résumé includes everything from FORTNITE to a HOW TO TRAIN YOUR DRAGON movie to PROMISING YOUNG WOMAN, complemented by songs (both original and existing) sung by M3GAN in moments guaranteed to get a riotous rise out of the audience.

For all the laughs and jumps M3GAN engenders, it also has a few unforced things to say about the ubiquitousness of tech in our lives, and the way electronics can become substitutes for involved parenting. There are a few references to “screen time” and how it should be restricted, and the idea that a function previously fulfilled by tablets and iPhones might someday be served by something that looks just like us gives the movie a provocative subtext that enhances the entertainment.