At the preview of JURASSIC WORLD: DOMINION I attended, a colleague arrived with his young daughter in tow, and I asked whether she might be frightened by what promised to be some pretty intense dinosaur action. He reassured that she had seen all the previous movies, and that “The only parts she asked me to fast-forward through were when people started sermonizing.” If only a similar option was available during theatrical screenings; it might have helped get past the lengthy stretches in DOMINION during which the prehistoric creatures take a powder.

This is yet another legacy sequel, bringing together the continuing WORLD characters and the original JURASSIC PARK team to make up what ultimately becomes an unwieldy ensemble. The feeling persists throughout DOMINION that following Owen Grady (Chris Pratt), Claire Dearing (Bryce Dallas Howard) and Maisie Lockwood (Isabella Sermon) as they conclude their triptych would have been enough. Their material, for a little while at least, is more compelling than the shipping going on between Dr. Alan Grant (Sam Neill) and Ellie Sattler (Laura Dern); a great deal of the dialogue and characterization in the script by Emily Carmichael and returning (from the first WORLD) director Colin Trevorrow is simplistic, and it becomes especially awkward where Alan and Ellie’s flirtation is concerned. Their budding romance comes off like unnecessary fan service that distracts from what JURASSIC devotees are really here to see. 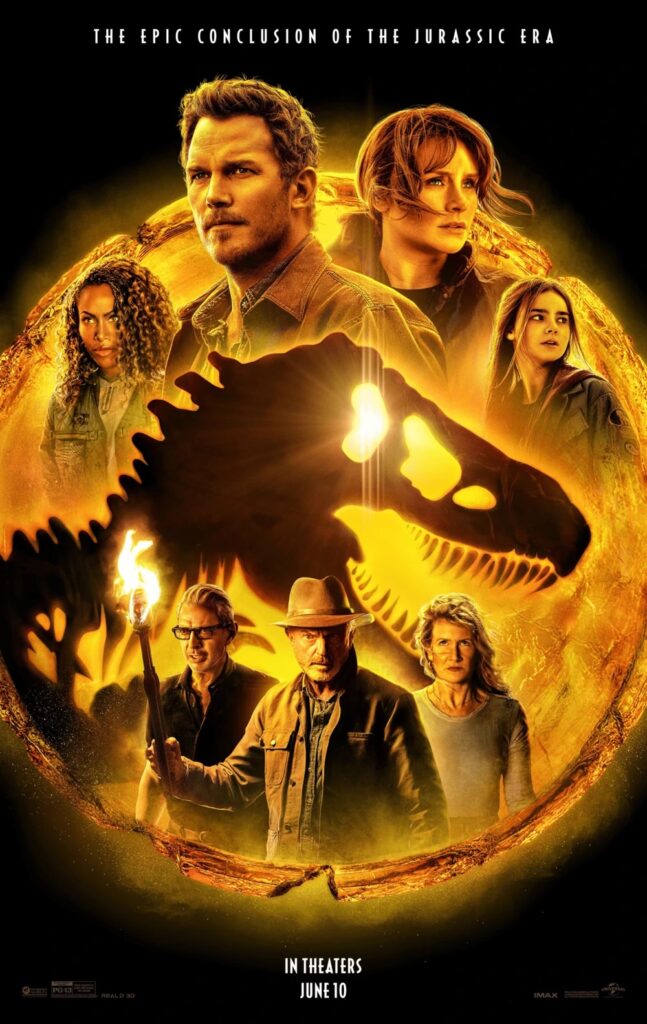 Alan and Ellie are brought together to investigate a strain of super-locusts that have been decimating crops across the U.S. and threaten to go global. They’ve been genetically engineered by JURASSIC regular Dr. Henry Wu (B.D. Wong), under the oversight of Lewis Dodgson (Campbell Scott), head of the Biosyn corporation. Fans of this series might remember Dodgson as the guy who started all the trouble in the first JURASSIC PARK by enlisting Dennis Nedry to steal the dinosaur embryos, and now he’s an Elon Musk/Steve Jobs-esque tech giant scheming to use the mutant bugs to hijack Earth’s food supply. Part of his plot also involves kidnapping both Maisie, whom Owen and Claire have been keeping in hiding since the revelation that she’s a clone whose physical specifics carry life-on-Earth-altering implications, and the infant offspring of the Velociraptor Blue, who carries another piece of that puzzle and has been living in the woods near Owen and Claire’s secluded cabin.

Following the abduction of both girl and raptor, Owen makes a promise to Blue to retrieve her baby, and Pratt continues to impress as one of the few actors who could convincingly “communicate” with dinosaurs. He also bolsters his action-hero cred with a lengthy sequence that begins with him, Claire and Owen’s associate Barry (Omar Sy) infiltrating an underground dino market in Malta. DOMINION, set four years after the previous FALLEN KINGDOM, takes place in a world where the prehistoric beasts now regularly interact with humans, so of course there’s an illegal trade in these animals, and this setting is packed with colorful and amusing detail. The setpiece then launches into a lengthy, very well-staged chase between Owen, Claire and weaponized raptors through and above the streets that delivers lots of thrills and imaginative action bits. Yes, it feels more like something out of a Bond or Bourne film than a typical JURASSIC episode, but by this point in the franchise, it’s also an exciting change of pace–much like the Gothic-horror stylings J.A. Bayona brought to FALLEN KINGDOM.

Unfortunately, this highlight arrives about an hour into this 147-minute film, and Trevorrow only rallies anything as creative or exciting twice more, as Claire evades hungry attackers in the air and in the water. Much of the rest of DOMINION takes place within Biosyn’s labs and expansive dino sanctuary deep within Italy’s Dolomite Mountains, as the characters superficially debate the morality of tampering with science when not running through repetitive scenes of dinosaur pursuit. In addition to the returning folks noted above, FALLEN KINGDOM’s Franklin (Justice Smith) and Zia (Daniella Pineda) also make appearances, joined by a couple of notable new characters: Kayla Watts (scene-stealing DeWanda Wise), a brave pilot-for-hire à la Han Solo, and Ramsay Cole (Mamoudou Athie from BLACK BOX and UNDERWATER), Biosyn’s principled head of communications. (There’s also a white-clad villainess, Dichen Lachman’s Santos, seen briefly in the dino market, who’s incongruous enough to make one curious to see more of her.) It’s unfortunate but perhaps not surprising that out of this overstuffed company, the only one who makes an impression is Jeff Goldblum, amusing as always playing cynical wiseass Ian Malcolm.

Scott seems to be attempting to spice up his colorlessly written villain by trying to out-eccentric Goldblum, but that’s a fool’s errand, and DOMINION becomes increasingly dependent on callbacks to its predecessors as it goes along. The filmmakers seem more interested in dredging up talismans like a familiar shaving-cream can than giving the movie’s people anything distinctive to do, and the introduction of several new dinosaur species (including a couple with feathers) provides only momentary beats of interest. This is at least the third time the series has tried to one-up the T. rex by introducing an even bigger, badder predator, and like so much in JURASSIC WORLD: DOMINION, it just doesn’t have the charge it once did.