BEAST is a confidently made entry in the animal-attack subgenre that will hold few surprises for fans of the form, though there are slight variations here and there. It expectedly starts with the critter in question claiming its first victims, though in this case, they’re not innocent casualties but a gang of African poachers who slaughter a pride of lions late one night out in the veldt. They don’t quite finish the job, and the surviving big cat–an especially large and rapacious specimen–exacts violent vengeance for the death of its “family,” which makes this sequence as akin to something like DEATH WISH as it to the trendsetting JAWS.

A good deal of BEAST, in fact, is less JAWS with paws than a variation on the central situation of CUJO. Idris Elba stars as Dr. Nate Samuels, a doctor who brings his teenage daughters Meredith, or “Mer” (Iyana Halley) and Norah (Leah Jeffries) on a trip to South Africa as part of the healing process following his wife/their mom’s death. There’s unresolved tension among them, particularly between Nate and Mer, and we can guess pretty much from the start that the life-and-death circumstances to come will result in some serious enforced bonding. So there isn’t an awful lot of time spent with setup and character development as the trio, along with “Uncle Martin” (Sharlto Copley), actually an old local friend of Nate’s who introduced him to his wife, head out into the bush where the lion lurks. 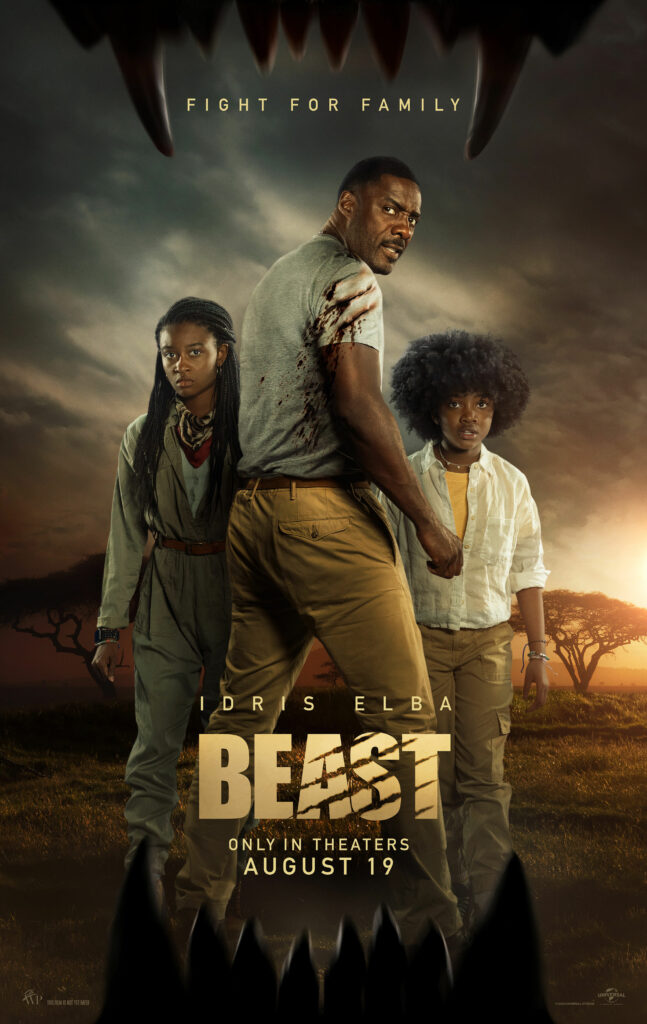 Ryan Engle’s script does make a pit stop to assure us that not all lions are bad, just that aggrieved and pissed-off one, as Martin playfully scuffles with part of a pride hanging out photogenically on a rock formation. ROAR this isn’t, which the cast would no doubt appreciate; the felines are largely brought to life via CGI that pretty well sells the illusion–and it helps that the central killer is often seen in the shadows or at night. And for a little while, its presence its suggested by the aftermath of its attacks, particularly when Nate and co. arrive in a small village it has decimated. Here and elsewhere, Icelandic director Baltasar Kormákur proves to be the right choice for this hotter-climate saga, teaming with Oscar-winning cinematographer Philippe Rousselot (INTERVIEW WITH THE VAMPIRE, a few Tim Burton films) to immerse us in the scenes via long, mobile but non-showy takes that build the intended tension.

Then the lion makes its scary, Cujo-esque first assault on our principals’ jeep, which winds up disabled in an area out of radio range, leaving them stranded with few supplies or weapons. Can Nate, way out of the environment he’s comfortable with, rise to the occasion of protecting his daughters and surviving long enough to get them to safety? Well, it helps a lot that he’s played by Elba, who here both projects an everyman quality and brings his prior action bona fides to the role; you can buy Nate’s concern for his kids as well as the heroics he gets up to as a result. He shares solid father/daughter chemistry with Halley and Jeffries, who are naturalistic and likable even when Mer makes a couple of very questionable decisions to keep the jeopardy going. Copley is effortlessly engaging as well, though a couple of hints at a darker side of his character aren’t explored as far as one might like.

In general, BEAST is stripped down to the basics and values elemental rather than detailed storytelling–similar to the alligator opus CRAWL from a few years back, though not quite as scary. It successfully gets past some hiccups in the narrative–doors and windows left open when they really shouldn’t be, a big continuity jump during the climax–via the persuasiveness of its performances and solid pacing and staging that help the simple story go down easily and sometimes quite excitingly. “This is so back in the day,” Mer says upon discovering there’s no Wifi or cell service out in the wild, and BEAST makes a virtue of its comparatively old-fashioned approach to tooth-and-claw thrills.