By sheer coincidence, HOUSE OF DARKNESS is one of two films opening today (the other is BARBARIAN) in which Justin Long plays a guy with troublesome attitudes toward women, and the second in two weeks (after THE INVITATION) to take cues from and throw shoutouts at Bram Stoker’s DRACULA. The trailer coyly describes the movie as “A reimagining of Bram Stoker’s timeless tale” without revealing the title, as if trying not to spoil the movie while still tipping its hand about the big reveal. On the other hand, this critic saw HOUSE at its international premiere at Montreal’s Fantasia this past summer with no foreknowledge of its content, and didn’t need any to figure out where the story was going pretty early on.

HOUSE OF DARKNESS is writer/director Neil LaBute’s second try at the horror genre after his unfortunate THE WICKER MAN remake, and its opening act hints at a return to the glory days of his small-scale early features IN THE COMPANY OF MEN and YOUR FRIENDS AND NEIGHBORS. It’s full of the kind of loaded, probing dialogue that has distinguished LaBute’s past work, as Hap (Justin Long) drives Mina (Kate Bosworth) home after meeting her at a bar. She has invited him back to her place, and for a guy like Hap, that can only mean one thing. He threads innuendo through their conversation, but is sure enough of the outcome that he drops in bits of self-deprecation, lest he appear too eager. Meanwhile, some of Mina’s dialogue is cryptic to the point where it seems she too has an agenda–and did we mention that her place is a big stone castle, lit with moody candlelight by DP Daniel Katz? One full of shadows where Hap starts to discern mysterious, half-visible figures? 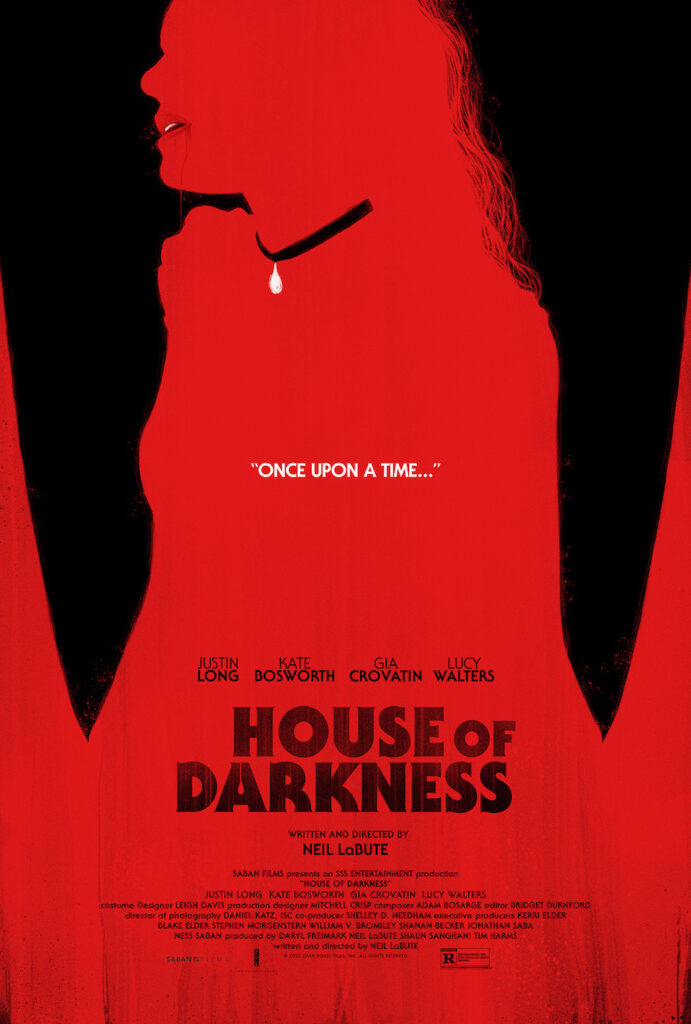 It doesn’t take much time to figure out that things aren’t what they seem, and that the overconfident Hap is in for a big surprise; after all, just think about the implications of his name. Mina’s moniker is also something of a giveaway, and then, after a half hour or so, her sister Lucy (Gia Crovatin) makes a sudden surprise appearance. At this point, anyone remotely familiar with the fright genre in general and Stoker in particular will immediately know exactly where the story is headed, and one waits in slowly dwindling hope for LaBute to deliver something deeper and more complex than a simple #MeToo saga of comeuppance. But after the teasing suggestiveness of Hap and Mina’s opening-act repartee, HOUSE OF DARKNESS proceeds in unsurprising directions, and requires a lengthy dream sequence to get it past the 80-minute mark. Even without BARBARIAN, which gives Long a similar role with far more nuance and elaboration, on hand for comparison, HOUSE would come off as half-thought-through and simplistic.

One can at least admire the atmosphere generated by LaBute, Katz, production designer Mitchell Crisp and composer Adam Bosarge, and the performances are fine in parts that, in the end, don’t have enough for the actors to chew on. LaBute has here appropriated the tropes of horror without giving them enough meaningful impact on his story; take them out, and almost all of HOUSE OF DARKNESS could proceed pretty much the same way. And in fact, without the unsubtle clues about them, the removal of the genre elements might have made the endgame a little less predictable.