The great inspiration behind Grady Hendrix’s novel MY BEST FRIEND’S EXORCISM was to bring the possession subgenre, very much a ’70s and largely grown-up trend, into the ’80s, when teens ruled the pop culture. Rife with references to the latter decade’s movies, music, TV, etc., the book doesn’t simply trade on its shout-outs but makes them part of the soul of its heroine, high-school student Abby Rivers. And while it doesn’t dig as deep into her soul, and has undertaken some necessary condensation, the film version of MY BEST FRIEND’S EXORCISM still succeeds by virtue of the heart in its central friendship between Abby and her titular BFF, Gretchen Lang.

A pair of fine performances by the two leads is a major asset in that regard. Elsie Fisher, so heartbreaking in EIGHTH GRADE (and so misused in the recent TEXAS CHAINSAW MASSACRE) is Abby, and Amiah Miller, who was quite affecting as the mute little Nova in WAR FOR THE PLANET OF THE APES, is Gretchen, and their instant chemistry bespeaks years of devotion to each other that has overcome their socioeconomic differences: Abby’s family is lower-middle-class, while Gretchen comes from money. So do their pals Margaret (Rachel Ogechi Kanu) and Glee (Cathy Ang), and these Catholic high-school girls dally with serious trouble during an outing at a lake house belonging to Margaret’s parents. They drop a little acid and break out a Ouija board, but things only go seriously wrong when Abby and Gretchen take a side trip into an abandoned nearby structure where a Satanic sacrifice allegedly took place. 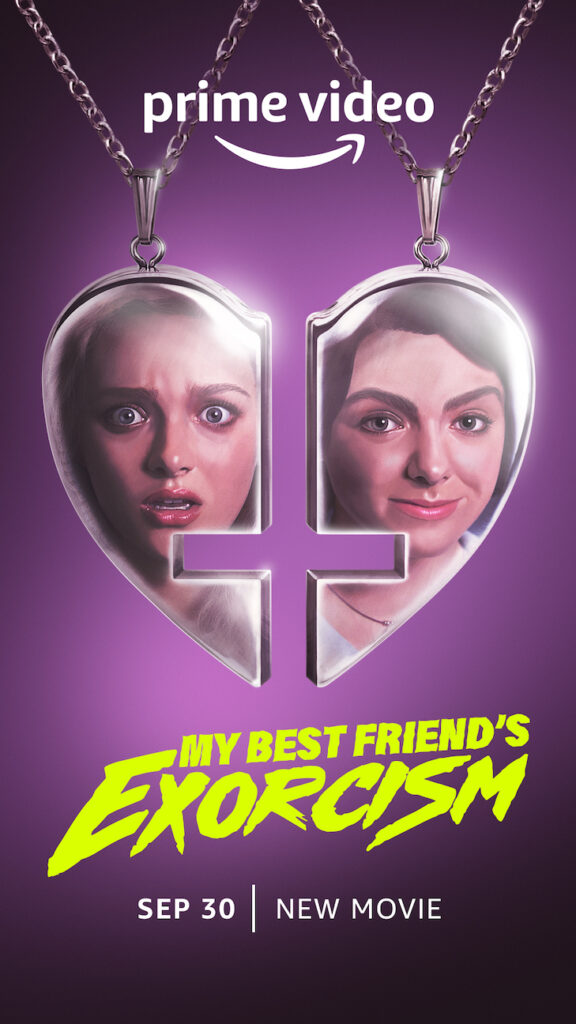 From the beginning, that Ouija board notwithstanding, MY BEST FRIEND’S EXORCISM does things a little differently than your typical possession picture. In a chilly setpiece well-staged by director Damon Thomas (making his feature debut after tele-terrors such as KILLING EVE, PENNY DREADFUL and BBC1’s DRACULA), disembodied voices trick Abby and Gretchen into separating before the latter is dragged off by the entity that overtakes her. Once she re-emerges, she doesn’t indulge in the usual twisted physical antics associated with demonic influence; it may be an in-joke pointing this out when the Head Nun In Charge uses the phrase “…it’ll make your head spin.”

Instead, Gretchen’s behavior is tinged with metaphor for the teenage experience. First she starts letting herself go, in the manner of a youth who’s fallen under the influence of drugs. Then her brief attempt to explain to Abby what happened to her lead Abby to suspect she’s been assaulted by Margaret’s horndog boyfriend Wallace (Clayton Royal Johnson), but their friends and Gretchen’s family refuse to accept that possibility. And then, Gretchen turns manipulative, exploiting her pals’ weaknesses–and yet through it all, despite some moments of doubt, Abby remains devoted to Gretchen and determined to cure her of whatever it is that has taken hold of her soulmate.

Jenna Lamia’s script doesn’t go to some of the deepest, darkest places the novel explores, though fans of the book will appreciate that the nastiest setpiece has remained. So has Hendrix’s best creation: Christian Lemon (Christopher Lowell), one of a trio of musclebound brothers who put on faith-based bodybuilding shows, hoisting gigantic crosses and the like. Played with just the right, often hilarious combination of enthusiasm and vaingloriousness by Lowell, Christian is sought out by Abby once she has realized what’s afflicting Gretchen, to perform the rite that will hopefully restore her best friend to her old self.

The exorcism itself incorporates some of the time-honored tricks, and the very personal intensity of the book’s climax has been replaced with standard-issue CG deviltry. Yet what shines through is the power of Abby’s compelling loyalty to Gretchen, and the rooting of the supernatural shenanigans in the realm of more prosaic but equally pressing teenage concerns. That world is evoked in a colorful but not overly fetishized fashion by cinematographer Rob C. Givens, production designer Bruce Curtis and costume designer Ariyela Wald-Cohain, backed by a Ryland Blackinton score that efficiently melds the poppy and the spooky. Not to mention a choice soundtrack selection of ’80s hits, which, however unintentionally, harks back to a decade when independent horror and comedy flicks–including lower-cost ones than this–could afford to pull songs from the top of the charts.