I don’t think I’ve fallen in love with the world of a film faster than I did during the opening minutes of NIGHTMARE ALLEY. As Stanton Carlisle (Bradley Cooper), on the run from a bad deed circa 1939, inveigles himself into a traveling carnival by night, he plunges into a realm of sinister sights and manipulation, brought off with intoxicating style by director/co-writer Guillermo del Toro and his collaborators. Just before Stanton arrives at this milieu, there’s a brief visual device hinting that what follows will be a dream; it isn’t, but that’s kind of how the ensuing setpieces feel. It’s a realm of heightened production design and characters suggesting all manner of hidden duplicities, and I was hooked.

This sort of carnival is such a natural habitat for del Toro that while watching NIGHTMARE ALLEY, it’s hard to believe he hasn’t devoted a feature to one before. It’s not a spoiler to reveal that only half of this movie takes place there, and not a severe criticism to say that I wish the entire film did. It would have been wonderful to dwell among the odd, tormented and fascinating denizens of this collective of misfits–with whom, it seems needless to say, del Toro’s sympathies are very much aligned. His past filmography has always been about treating monsters with understanding, and though everyone in NIGHTMARE ALLEY is human, those who are oddities are essentially the good guys. Even the “Beast Man”–a.k.a. the geek, who bites the heads off chickens and is exhibited in the name of “science and education”–is a suffering soul who could be read as an analog for the monster in FRANKENSTEIN, a story del Toro has long desired to tell on screen. 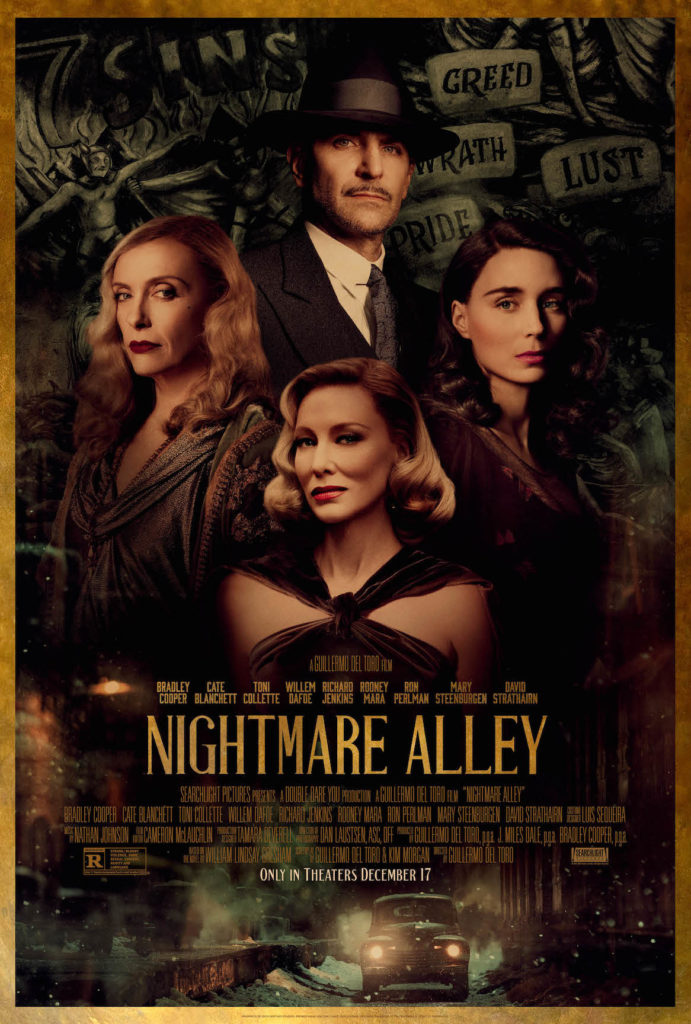 Those people who are NIGHTMARE ALLEY’s villains are afflicted by sicknesses of the soul, and prey upon the weaknesses of others. Which is not to say that, for example, Zeena (Toni Collette) and Pete (David Strathairn), who run a mind-reading show duping patrons out of their pennies, are presented as baddies. In a sense, they’re just making a living, and del Toro and co-scripter Kim Morgan have contagious fun revealing the secrets behind the couple’s magic act. And some of the attractions come by their abilities honestly, like strongman Bruno, played by del Toro regular Ron Perlman, who gets some of the best tough-guy dialogue. Brandishing a fist at Stanton, he warns, “I’ve still got five pounds of meat and bone right here. You hurt that girl, you’re gonna get ’em all.”

“That girl” is Molly (Rooney Mara), who does an electrical-conducting act that Stanton sees a way to improve. Bruno doesn’t trust his designs on the young woman, and it’s hard to blame him; Cooper manages the tricky balancing act of projecting the charisma that has some people going along with his schemes and an undercurrent of deceitfulness as he strives to get what he wants, no matter who gets hurt. It’s that desire for bigger things that leads him to leave the carnival and land in the orbit of Lilith Ritter (Cate Blanchett), a psychiatrist in Buffalo (nudge nudge), New York who has her own racket going and finds an eager partner in crime in Stanton. But who’s really tricking whom here? Blanchett proves herself born to play an old-fashioned femme fatale, and she and Cooper enact a captivating pas de deux of con-artistry.

The entire cast of NIGHTMARE ALLEY, in fact, is terrific–everyone fully inhabiting their roles and very much appearing in period. A particular standout is Willem Dafoe, perfectly cast as Mephistophelian Clem Hoatley, who runs the carnival and whose monologue explaining to Stanton how to “create” a geek is a chilling highlight. Adapting William Lindsay Graham’s novel (previously made into a 1947 film starring Tyrone Power), del Toro and Morgan take their time unfolding the story, particularly once the carnival has been left behind; there are times when it feels like the movie is simmering when it should be building to a boil. Yet even if one misses the midway attractions conjured up by production designer Tamara Deverell (a funhouse mixing menace with metaphor is particularly striking), the entirety of NIGHTMARE ALLEY is gorgeous to look at, with an equal attention to evocative detail in Lilith’s office and the many other upstate New York settings.

Cinematographer Dan Laustsen captures it all with perfect coordination of light, color and shadow; it’s remarkable and telling how different the carnival looks in the morning light than it does in the dark of night. Nathan Johnson’s score provides the perfect, captivating accompaniment to the movie’s many emotions and moods, and although, as noted, there are no fantastical creatures here, del Toro doesn’t shy away from shocking gore (courtesy of Mike Hill Creations) when the violence transitions from psychological to physical. NIGHTMARE ALLEY may not be horror in the strictest sense, but it takes the viewer on a journey through the darkest human emotions that any devotee of the genre can very much appreciate.