For viewers of a certain age, FEAR STREET PART 1: 1994 will take you back (has it really been two and a half decades?) to the days when SCREAM jumpstarted the slasher genre for a more media-savvy age, and R.L. Stine’s FEAR STREET books were offering extra blood and guts to young teen readers who had grown up on his GOOSEBUMPS series. For the current target audience, this first of a triptych inspired by Stine’s work offers plenty of grisly thrills, with up-to-the-minute casting and one rather subversive twist.

FEAR STREET 1994, debuting today on Netflix, opens in very SCREAM-like fashion with the extended stalking and murder of teenaged Heather, played by the daughter of an acting family: Maya Hawke, Ethan and Uma Thurman’s child (an especially canny bit of casting given her regular role on STRANGER THINGS, which evoked the same genre nostalgia plumbed by this movie). We also get the welcome return of something we don’t see in many horror films these days: the scene-setting main titles sequence, here introducing us to the history of suburban Shadyside, which has quite a legacy of death and pain. Then this becomes very much a production of its time when we’re introduced to our heroine Deena, played by Kiana Madeira (an actress of color, which you didn’t see often in the leads of ’80s/’90s teen horror), and the “Sam” to whom she writes an anguished post-breakup letter turns out to be another girl (Olivia Scott Welch). Later, we’ll spot a “Gun Free School Zone” sign, but shootings aren’t what these teens have to worry about. 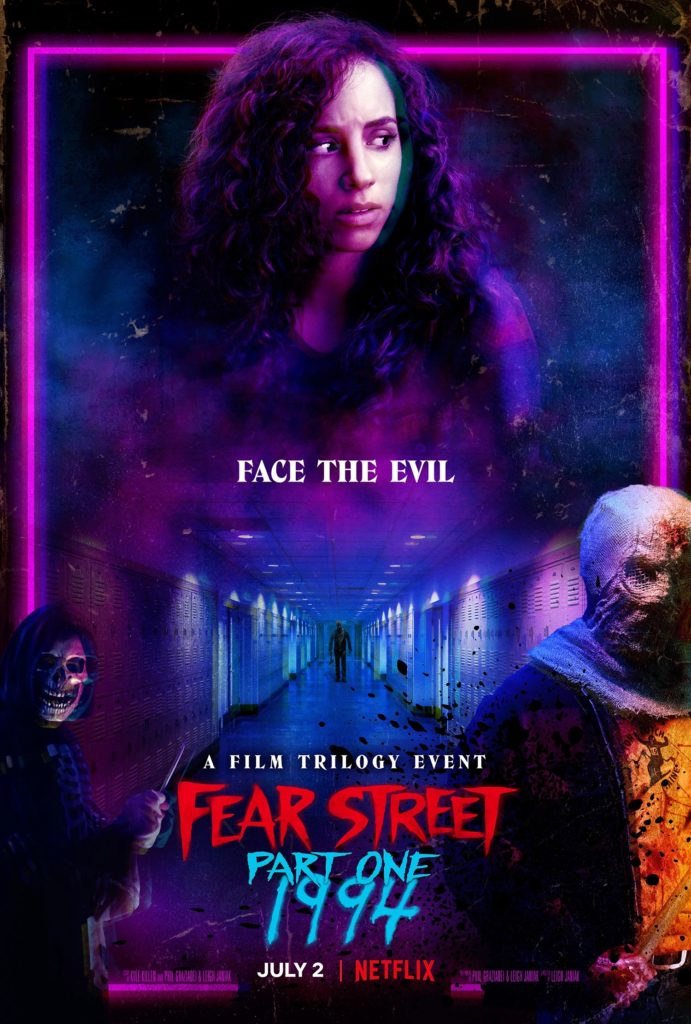 Sam has moved to the neighboring, much safer and more prosperous town of Sunnyvale (their competing football teams are the Shadyside Witches and the Sunnyvale Devils), and you have to wonder why more of Shadyside’s residents haven’t headed that way, given their home’s high mortality rate. Indeed, there’s a rather cavalier attitude toward Heather’s death on the part of the student body, which also includes Deena’s horror-nerdy younger brother Josh (Benjamin Flores Jr.), who has a paranoia wall in his bedroom; top-of-her-class cheerleader Kate (Julia Rehwald), who’s also the school’s supplier of controlled substances; and eccentric Simon (Fred Hechinger). This group’s rivalry with the Sunnyvale students, including Sam’s new boyfriend Peter (Jeremy Ford), will lead to their discovery that an evil that has long plagued Shadyside is back in a big way.

It’s not a spoiler to note that the source of the terror is Sarah Fier, a long-dead witch whose spirit is still very active, though FEAR STREET 1994 writer/director Leigh Janiak and co-scripter Phil Graziadei find a way to introduce a wide variety of fearsome fiends to torment the young leads. Janiak and Graziadei made an impressive debut with 2014’s HONEYMOON, a more cerebral relationship horror story; with this project, they have a lot of fun with a more pop-genre approach, awash in ’90s signifiers, from the black-light posters in a Spencer Gifts-esque store (which also carries books by “Robert Lawrence,” i.e. “R.L.”) to the AOL chat room where Josh spends a lot of his time to a soundtrack fully stocked with songs of the era. They’ve also effectively married slasher tropes with the supernatural, allowing for a wide variety of scary setpieces, colorfully lensed by cinematographer Caleb Heymann (another STRANGER THINGS vet, who also shot THE MORTUARY COLLECTION).

If the characters can occasionally get on your nerves just like their counterparts in the ’80s/’90s slashers did, they actors are all energetic and ultimately sympathetic enough to keep you hoping they’ll defeat the evil plaguing them. Their unity in trying to solve the problem, in fact, is another update from the teen-stalker films of past decades, in which the kids tended to remain clueless about the danger until well into the running times. There’s another, rather transgressive alteration in FEAR STREET 1994’s scenario as well; not to give too much away, but this is a teen-oriented horror film in which drugs actually help save the day.

The FEAR STREET films were originally set to be released theatrically by Fox before the studio’s acquisition by Disney scotched that deal, and Netflix is the perfect home for them, allowing for the serialized one-a-week release. Two of the incidents referenced in that main-titles montage will be fully explored in the subsequent installments, set in 1978 and 1666, filling in the history hinted and teased throughout FEAR STREET 1994. It’s an unusual gambit, telling the overarching story in backwards chronological order, but this first entry works solidly as both a stand-alone chiller and to lay the foundation for the films to come.